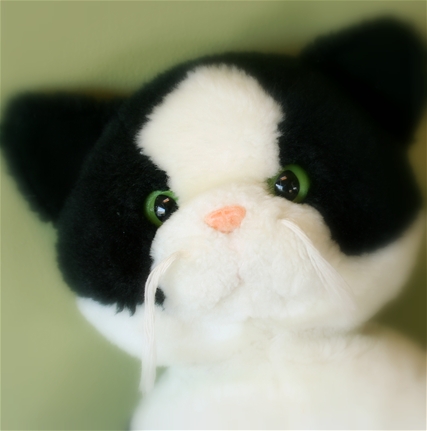 I’ve been inspired by the fabulous photos of kids’ toys at Will It Look Good Over the Sofa to take some portraits of her favourite toys for the Minx’s room.

Jessie Cat had a special bath before sitting and proved herself to be an outstanding model -  absolutely no fidgeting, backchat, diva-ish behaviour or cocaine – though a smile would have been nice and might have made her seem a bit less sinister.

I’ve bought a trio of frames from Ikea and will take a couple of portraits of favourite other toys to make up a triptych.

We haven’t printed it up yet, but even seeing Jessie on the computer screen has made the Minx utterly ecstatic.

Picture the Holidays – All You Need is Love

Here’s a post for friends and family only.  I put this together for a family portrait I’ve commissioned and thought the pictures worked really well together. 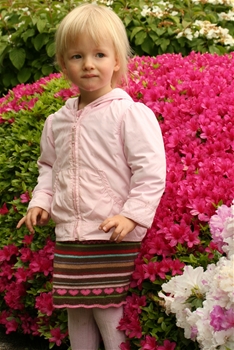 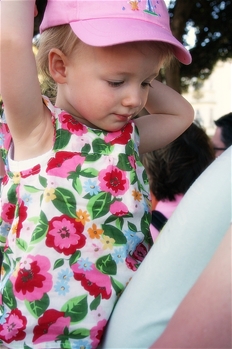 More about the family portrait when it’s completed.  I’m VERY excited though. 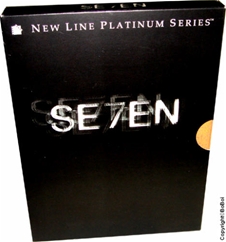 I’ve been tagged by Lottie to reveal seven random facts about myself. 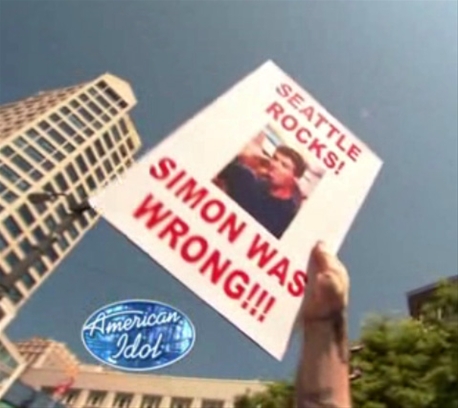 Sign held up by Blake at his homecoming concert

I’m sorry but I love this Robin Thicke song and the below made me come over all fangirly.

One of the most unwelcome things about motherhood is the fact that I have to lug a huge bag full of stuff around with me EVERYWHERE I go.

Admittedly it’s not as bad as it used to be, but I still routinely have nappies, an Elmo beaker, snacks, assorted books, bibs and cutlery, wipes etc. etc as well as all my own gubbins dangling about my person. 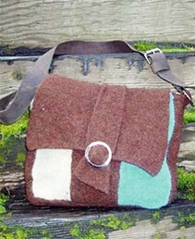 My old velvet carpet bag bought on Portobello Market is finally giving up the ghost and so I desperately need a new bag.

If it were winter I would be buying this gorgeous hand-felted messenger bag by the super-talented Jamie Irene. (I first saw these at the Urban Craft Uprising and they’re marvellous – beautiful soft felting with really lovely heavy distressed leather straps).

If I didn’t have to lug so much stuff I’d buy one of her Sweet Thang bags, but I’m a bit afraid things will fall out the top, and I really need a messenger to keep my hands free. 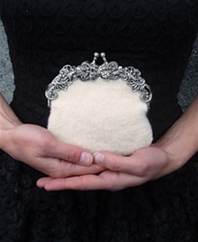 And if I were having a winter wedding I would definitely consider one of these.

Unfortunately, having said all that we’re just, finally, coming into summer, and it so isn’t the season for felted wool.  Has anyone got any good ideas for where I can find a gorgeous summer-weight messenger bag?

I realise I’ve been so caught up in moving house and thinking about doing it up that it’s been the longest time since I blogged about the business.

It’s been chugging along quite nicely for the last few months, though not growing as spectacularly as I would have wished, as I just haven’t been able to focus on it as much as I would like. 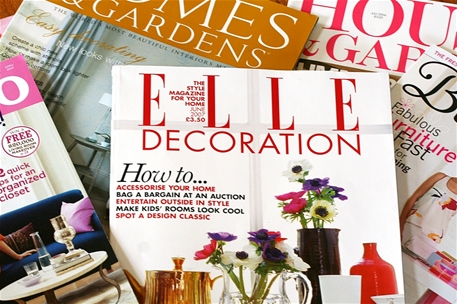 Hello, my name is Paola, and I’m a magazine addict…

But hopefully things will be changing going forward.  The big news is that last month I let go of our PR company.  We’ve worked with Plum pretty much since mirrormirror was founded and for the first year or so they did a fairly good job for us – getting us coverage in most of the broadsheet newspapers and spots in magazines such as Vogue, Glamour, Marie Claire, Homes & Gardens and InStyle.

But I think they got a bit complacent last autumn and call-ins and coverage started to to dry up.  Unfortunately for them this coincided with me adding a ‘how did you hear about us?’ button to the site which meant that I could finally monitor exactly how much profit was being generated via press mentions.  And it wasn’t enough to justify the high cost of the retainer.

So, from now on, and for pretty much the first time ever, we’re going it alone, which feels rather scary.  We’re in the process of compiling an in-house press list and are going to be developing a journalists’ newsletter and image library.

The good news is that this has freed up a chunk of change each month to spend on different forms of advertising and marketing and introducing more new products, which will make life much more fun.

If you’re a journalist yourself, or edit or write a fashion or design blog and would like to be added to the email list then please contact me. I promise to send you no more than one email a month (and that’s only if I get myself super organised!) 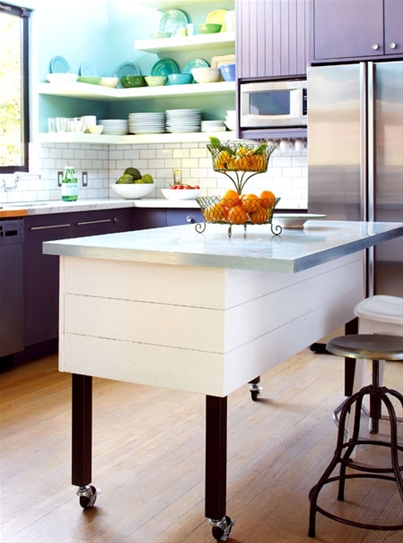 Pic from Sunset via  Decor8

Holly over on Decor8 has just posted this picture as part of a discussion about purple and I am madly in love with it for all sorts of reasons.

Loving the mix of aqua and lavender and may now have to revise my kitchen colour scheme to include some of the latter (wouldn’t a really knocked back lavender look lovely with my breadbin?)  Loving the way this mixes traditional elements such as subway tiles and wood planking with more contemporary elements such as stainless steel, up-to-date colours and freestanding pieces.  Just loving that breakfast bar/island thingymajig, period.

The photo is of course made by the splash of orange in the middle, though the curly display stand thingy is the only thing in the kitchen I don’t like.

I’m SO excited about the deck!  Mr Handyman is doing the most incredible job, and while there has been, as the Husband would put it, a certain amount of ‘feature creep’ and it’s taking longer than billed, the end result is going to be spectacular. Photos soon. 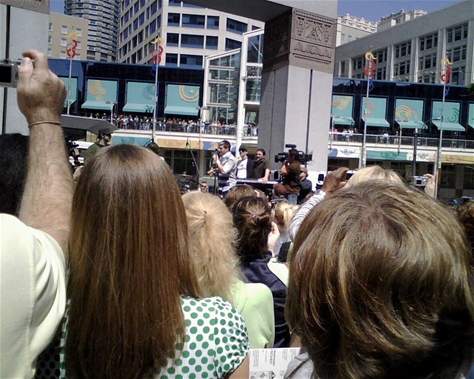 Pic taken on phone, so not very good quality

So any street cred I might once have possessed was torn to shreds on Friday, when the Minx and I found ourselves in the square in front of the Westlake Center cheering for Blake Lewis, Seattle’s representative in the final 3 of American Idol, on his homecoming tour.

I know he’s a bit of an 80s throwback (I just love the way the American Idol judges seem to think that beatboxing has only just been invented) but then so am I and I like the fact that he’s into dance music and is trying to do something a bit different on AI . Anyway, I went along mostly out of curiosity – and because it was something different to do with the Minx – but actually ended up having a pretty good time.  Though I still reckon that Blake will end up being a much better producer than he is a recording artist.  I’m sure the powers that be are dreading a possible Blake victory as Blake is clearly a prominent member of the Seattle underground hip-hop scene and it’s not going to be easy getting him to make the requisite album of syrupy goo.

The clip below is long, but includes Blake’s version of Keane’s Somewhere Only We Know and a duet on Baby Got Back with Sir Mix-a-lot.

Blake comes across as a very typical Seattleite – very pleasant and down-to-earth with an endearing geeky eccentricity and a total disregard of what other people might think.  I like Seattleites very much.

I’m finding it fascinating to see at first hand how much Americans identify with their cities and states.  While Europeans seem to focus on monumentally important national rivalries, here it’s all about the state. While it would never do to admit it, Seattle is quietly thrilled about Blake. Look for me and the Minx in the crowd when they show the clips on telly on Wednesday night.

Editing to say:  My forehead appeared on international telly last night peeking from behind a sign during Blake’s homecoming.  In order to spot it you would have to a) know which sign b) watch it frame by frame in HDTV.

And no UK peeps, I’m not telling you the result…

A Day In Wallingford

The Lab – Design Blogging in Seattle

Glow in the Dark – Kanye West 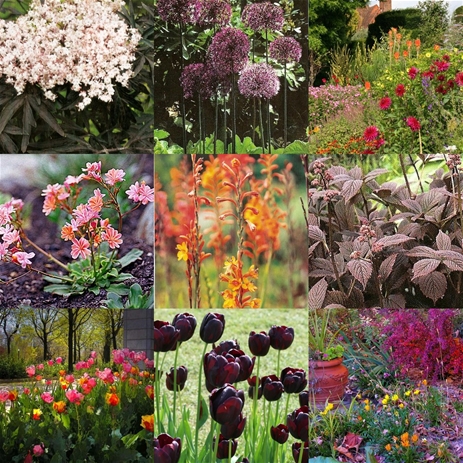 So here’s the brief I gave Brian the garden designer.

- Colour scheme as above.  Lots of orange, purple and hot pink with dark purple and dark green foliage and maybe the odd splash of lime green.

- a ‘New Dawn’ rose.  Both my previous gardens have had one and it will make me feel at home

- room for one of these under the cherry tree

- a patch of earth where the Minx and I can grow things ourselves.  She has so far announced that she would like to grow a ‘hee-yooooge punkin’ as in the seminal gardening tome  ‘Meg’s Veg’.

I think we need a bigger garden.

In the meantime someone who calls himself Mr Handyman is coming tomorrow to pressure wash the roof deck, stain the furniture, paint the deck floor and fix plexiglass to the railings to make it more kid friendly. So hopefully there’ll be some before and after shots to show you before too long.

What Do You Think? – Open Kitchen Shelves 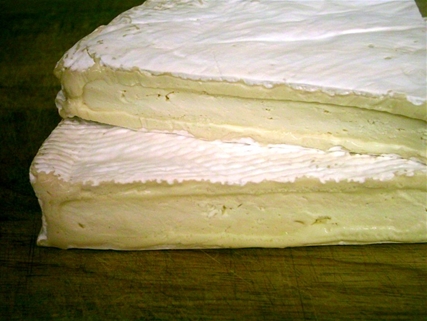 So there I am buying lunch in the supermarket.  Already in my trolley are the makings of a delicious endive and avocado salad (my current salad favourite du jour), and a fabulous loaf of crusty artisanal bread.

All I need is a triangle of ripe smells-like-old socks, oozing, melt -in-the-mouth, profoundly savoury unpasteurised Brie de Meaux.  Instead all there is the fat, flabby, bland and tasteless pasteurised stuff, which is as much like the real thing as Anna Nicole Smith was to Marilyn Monroe.

What sort of crazy country is this where any kid can play with guns, but you can’t buy unpasteurised cheese for love nor money?  And how sorry do I feel for Americans who have to go to Europe to be able to taste proper Brie?  And just how sorry am I feeling for myself at the moment?  Because this craving just isn’t going away.

Let them eat cake
next page >