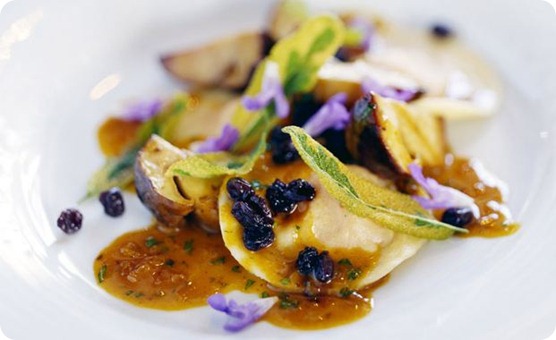 Beautiful ravioli from the Herb Farm

Oh but I’ve been a busy bunny recently.

On Tuesday night I was lucky enough to go to Foodportunity  – a networking event for Seattle foodies organised by Keren of FranticFoodie, where chefs, restaurateurs, press, bloggers, bakers and kitchen shops all get together to sample fabulous food from some of the top restaurants in Seattle.

This was the first time I’ve been and I so enjoyed myself. I got to meet fellow Seattle foodies and bloggers such as Seattle Bon Vivant and Carrie of Girl & Coconut (without her coconut on this occasion) whom I’ve been following for years, mirrormirror supplier Bella Cupcake Couture (with whom I’d only exchanged emails before) and loads of new and interesting people such as Lacey  from A Greener Kitchen, a new ecofriendly online kitchen store.

The food was really excellent – with my prize for foodie bite of the night going to Alaska Silk Pie’s tiny Creme Brulee Cheesecakes – and best of all, thanks to good offices and generosity of Carrie Coconut, I won dinner for two at the Herb Farm, which is renowned as one of the very best restaurants in the whole of the Pacific Northwest.  REALLY excited about that one.

I found out about Foodportunity on Twitter and the Herb Farm competition above was a Twitter competition on the night (which Carrie alerted me to). I’m really finding Twitter a great networking place to be, can’t think why I didn’t get on there earlier. My Twitter handle is @mirrormirrorxx. I’d love to see you there!