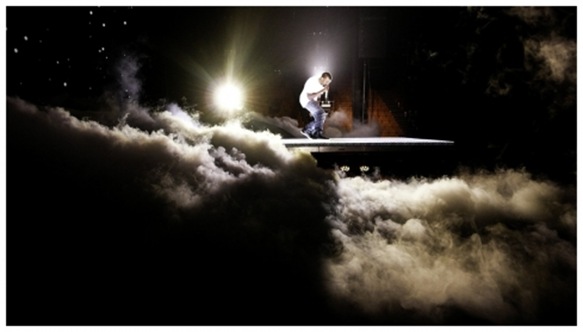 One of the CDs I listened to while I was in labour was Kanye West’s The College Dropout.  The midwife kept asking if I’d like to listen to something different (I think she hated it) but I found all the expletives to be just the thing.

Notwithstanding the fact that it brings back memories of the most hellish hours of my life, I’ve always liked Kanye’s music (yes, I know he himself can be a bit of a jerk).  So when I found that he was opening his Glow in the Dark tour in Seattle, and was promising the mother of all stage shows, with lights by the same guys who had created Daft Punk’s kickass pyramid then I just had to get tickets.  I’m a sucker for a good light show.

The support was pretty awesome too – Lupe Fiasco, N.E.R.D and Rihanna.  We arrived in time to catch the last bit of N.E.R.D’s set (Pharrell Williams is SO pretty and She Wants to Move was banging ) and all of Rihanna. She looked like a supermodel – all black PVC with dayglo pink and green accents and the most amazing neon pink lipstick. She can actually sing too and Don’t Stop the Music and Umbrella were pretty hot.

Then we had to wait for about an hour for Kanye to hit the stage – he obviously doesn’t have to worry about paying babysitters.   I have to add it wasn’t because he was being a prima donna, but because they were clearly having issues with the set.

When the show started, we could see why there’d been issues. The set was indeed incredible – a raised stage like the rolling hills of an apocalyptic landscape, the most enormous back screen and a hydraulic platform that tilted and moved up and down.  All accompanied by pyrotechnics, smoke machines, underlighting, overlighting, everywhere lighting, giant lit up globes, an anime blow up doll, a gold painted stripper hologram, a sexy computer and….just Kanye – the self-proclaimed brightest star in the universe – alone on stage for ninety minutes.

In a act of either extreme hubris or bravery, what was apparently a huge contingent of musicians and backing singers (all his tracks have been reworked for the show) were dressed in black, hidden under the stage in an orchestra pit and practically invisible, leaving Kanye on his own, acting out a (very, very silly) hip-hop space soap opera with all the technology.

I’m not sure it entirely worked for me – call me old-fashioned but I like seeing musicians perform – but it almost did, and Kanye is the only hip-hop artist with enough ego and charisma to get anywhere close to pulling it off. And it all got very moving when he appeared to be close to tears after a stripped down version of Hey Mama. And there really is nothing that compares with seeing a state-of-the-art, money-no-object, no-technology spared stage show.

Just to bring this post vaguely close to on-topic for this blog, do check out Kanye’s surprisingly fabulous blog – full of his design and creative inspirations.  He’s got some really cool stuff on there.  Oh and couple of reviews of the show here and here. And goodness, the sound system at the Key is cr*p. 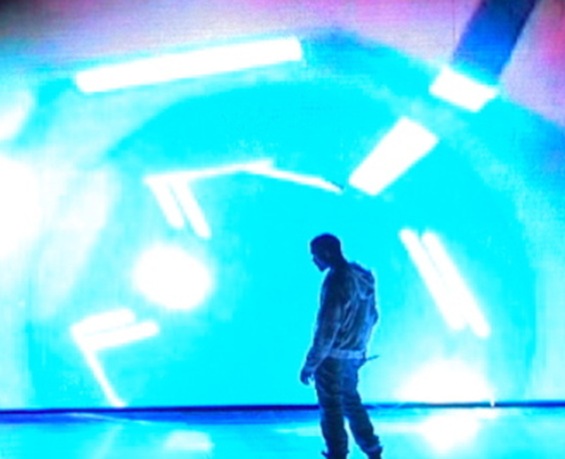 Arabesque
< The Three Chairs
The Lab >