AKA my most stressful experience to date this year. 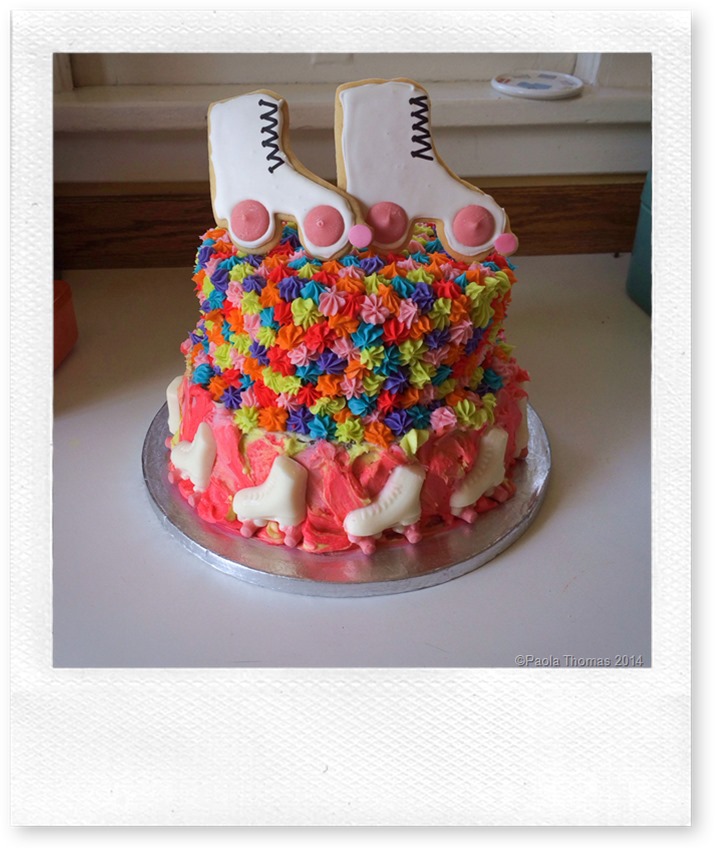 As you may remember we have a tradition of making crazy birthday cakes around these parts.

I believe it’s quite an English thing to do – I remember my mother and my friends’ mothers doing it for us when we were children – and it’s something I’ve always tried to do with the Minx.

She’s lucky in this regard that she doesn’t have brothers or sisters though, things would be far less elaborate if I had to do this more than once a year.

This year the Minx, who is now aged nine, had a very active say in the design.  The theme was rollerskates – as befitted a party at the rink –  though I wasn’t allowed just to use a skate shaped pan. The whole thing had to be as garish as possible, naturally, and since she had been very admiring of the cake I made for her friend we incorporated elements of that in the design too.

Since neither she nor I are particularly fond of fondant icing either, making skates out of fondant wasn’t an option and we were both inspired when we found a cake online that had made use of roller skate sugar cookies, a decision that I may have regretted later. Let’s just say that when a grown up Minx is in therapy complaining about her childhood, I will point her in the direction of this blog post. 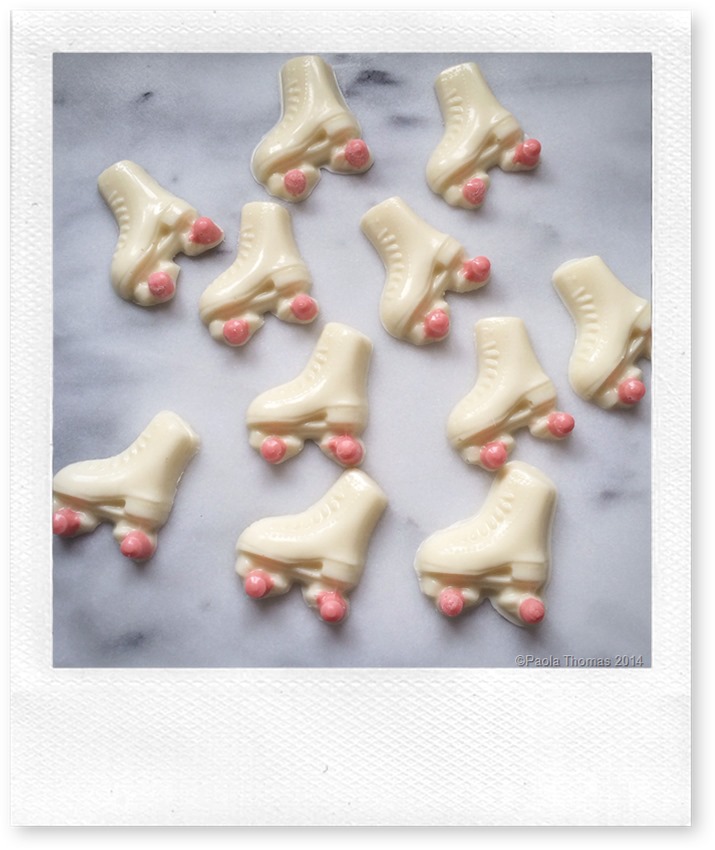 I started off in my usual way by buying a rollerskate candy mould and using Wilton’s Candy Melts in white and pink. A little bit of judicious piping later and I had a collection of bespoke cake decorations. I can’t tell you how grateful I was to have these to hand later in the process. 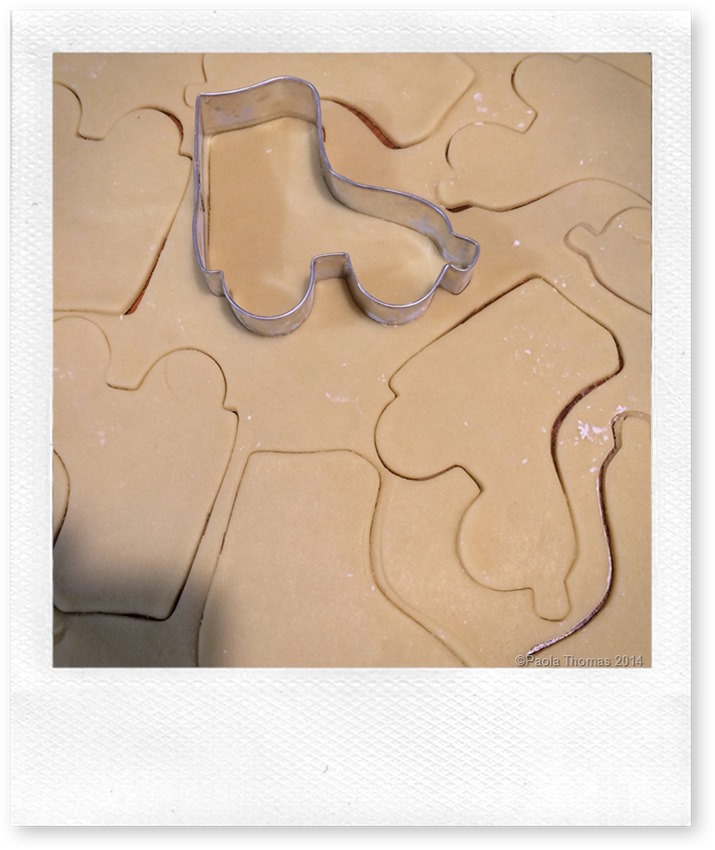 I also bought a roller skate cookie cutter and proceeded to make thirty roller skate cookies with the intention of using some to decorate the cake and handing the rest out at the party. The Joy of Baking’s trusty sugar cookie recipe was my guide and mentor here, though I was a bit worried as they looked a bit like trains initially.

I am not an experienced cookie baker so the whole family joined me in outlining, flooding and frosting the cookies. I hit upon the idea of using pink Wilton Candy Melts as wheels and an edible colouring pen for the laces otherwise I would be there icing them still. As it was I was totally OVER the whole project by the time these were done, but still had a whole cake to make and frost. 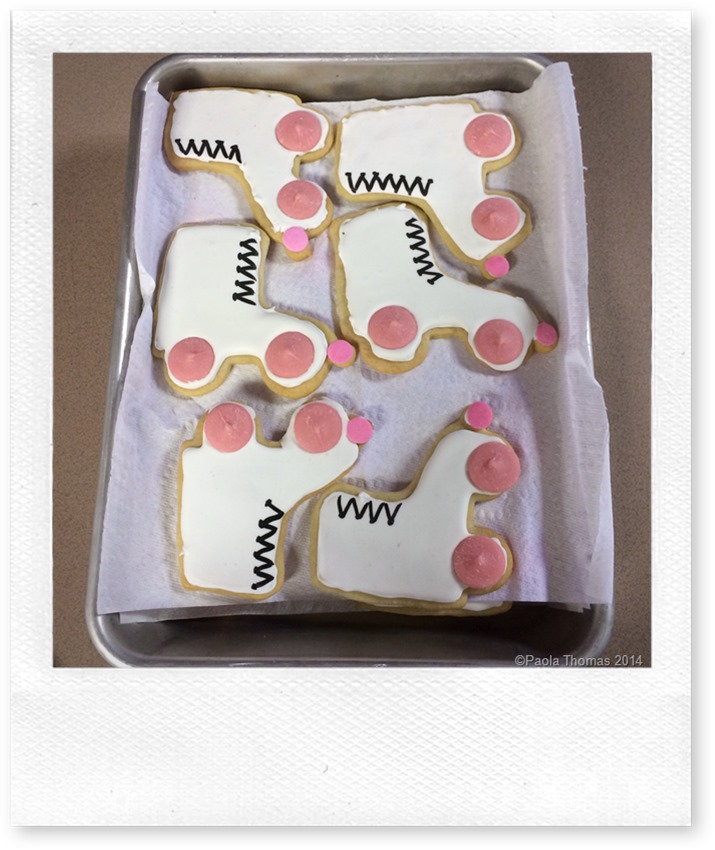 The day before the party I started to make the cakes with the intention of having at least the crumb coat done the evening before. I again used the wonderful Mom’s Chocolate Cake recipe from the first Macrina Cookbook, since its moist, rich, chocolate-yness (helped by using the amazing Pernigotti cocoa powder from ChefShop) is adored by kids and adults alike and it is extremely forgiving of being shoved into a variety of different shaped pans. (One day I WILL write the recipe down here as I refer to it so often).

Unfortunately I made a big miscalculation in working out how much mixture I would need to make two tiers and by the evening I only had half the number of cakes you see here (the bottom big cake and the bottom small cake). So I was up late baking extra cakes to give the cake the required depth. I was SO starting to regret this endeavour by this stage. 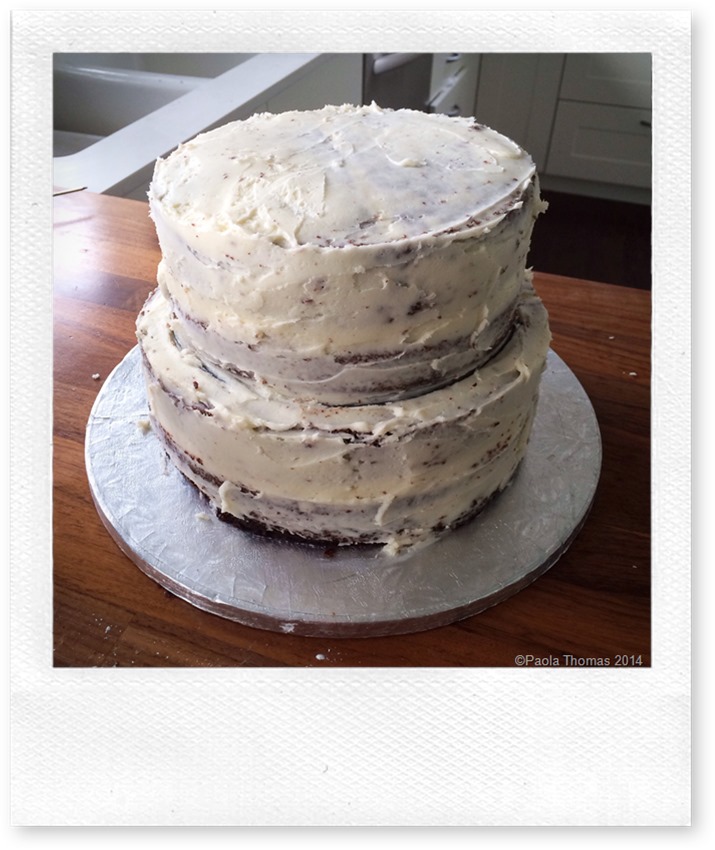 It was not until 9.30 am, with the party at lunchtime, that we finally got to the ‘crumb coat’ stage – a rough layer of buttercream that keeps all the crumbs at bay, holds the cakes together and after chilling, gives you a nice smooth surface for further decoration. 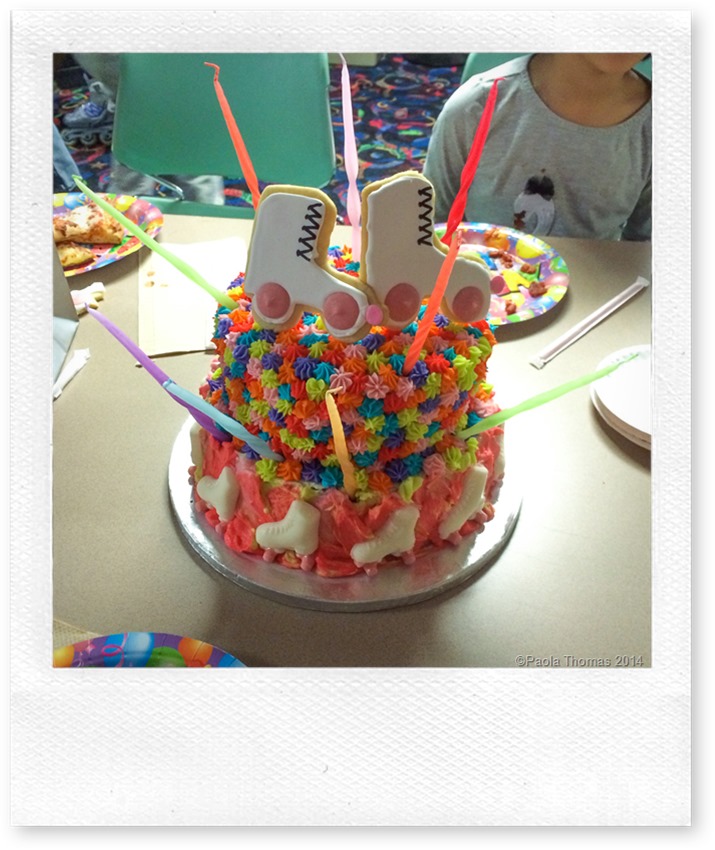 Doing the different spotty icings as seen in my Easy Cake Decorating blogpost (still by far my most pinned post on Pinterest), is simple and hugely effective, but it is not a quick process as you are manipulating six or seven different bags of frosting and covering only a tiny part of the cake at a time.

So by the time that part of the cake was completed we were really up against it time-wise.

I had intended to ice bigger colourful swirls on the bottom layer of the cake, but by that time the frosting was getting meltier and meltier and the swirls of icing were just dropping off the cake. With twenty-five minutes to go before we needed to be on the freeway to get to the skating rink, the bottom layer of the cake was a sorry disaster – half-frosted and sort of weeping misshapen blobs of icing. I wish now I’d taken a picture but photography was the furthest thing from my mind at that point.

The only thing left to do was to take my trusty offset spatula and quickly spread the melty frosting blobs into incoherent, messy but at least colourful swirls on the bottom layer of the cake and hope that the roller skate candies would cover things up a bit.

They did the job, the cake looked better than I could possibly have hoped and we were even able to chill it for 15 minutes before heading out the door. 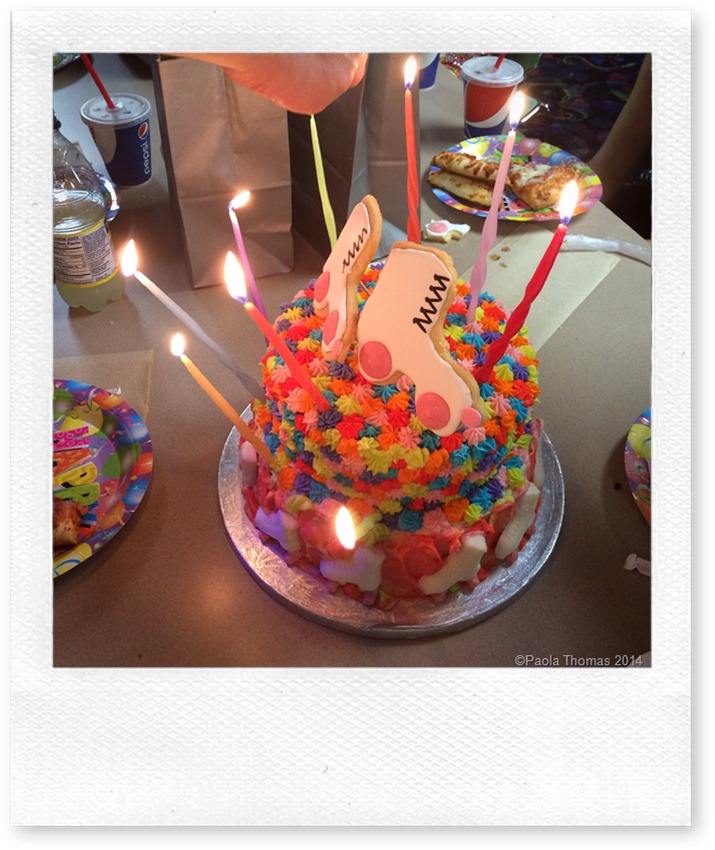 I myself had aged approximately a hundred years in the process but I suppose the joy on the faces of the Minx and her friends was worth it. 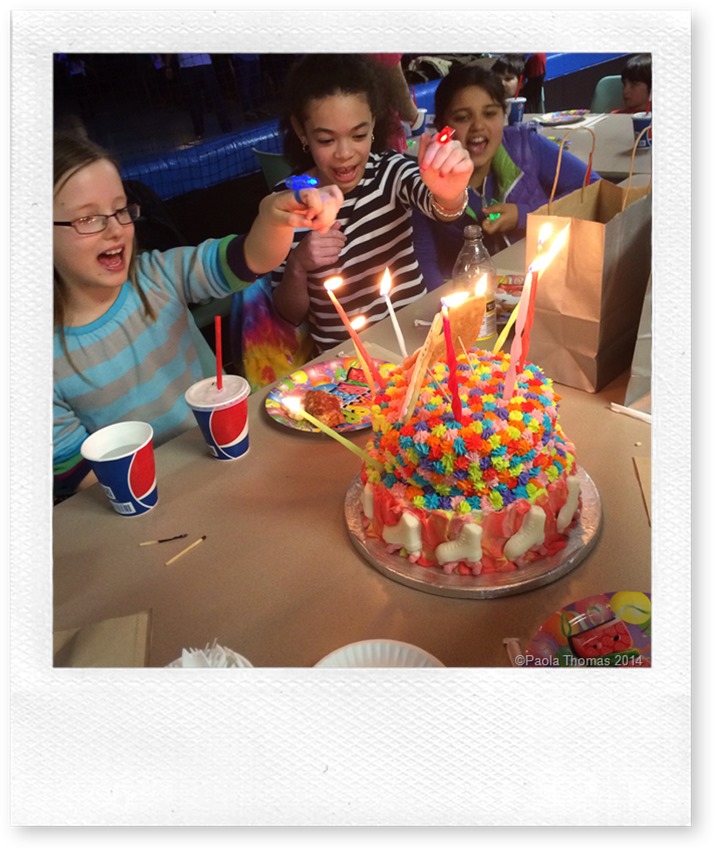 Thank goodness I have about a year to recover. More of the Minx’s crazy cakes here (Tinkerbell), here (Cinderella), here (Nemo).

The Minx had her own stressful morning. We’d bought her a ‘9’ candle, which we together decorated with sequins to make it suitably garish and cake-appropriate. Unfortunately unbeknownst to me she put it on the radiator to ‘dry’ and couldn’t fathom out where it had disappeared to later. A valuable life-lesson learnt methinks.

Oh and apologies for all the crappy iPhone photos. I think you’ll understand why picking up my big girl camera was the furthest thing from my thoughts during this process.

The Story of the Cake – Part 3