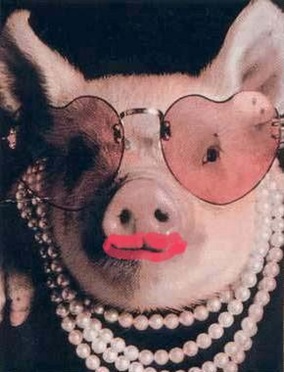 This blog really isn’t the place for political stuff, though some days it doesn’t feel right to be wittering on about cushions and cupcakes.  Today is one of those days.

I used to work in the City.  I stuck at investment banking for about nine years until I worked out that I hated it.  And one of the things I hated most was this feeling that we were putting lipstick on pigs and never really admitting they were pigs. But today the chickens and the pigs as well are coming home to roost.

As an outsider to the American political process, it has been fascinating and terrifying to watch it from the ‘inside’.  I had some idea when back in the UK that abortion was a big issue here.  I had no idea that even with so much negative crap going on, it would still be one of the most important issues on the agenda. People here don’t believe me when I say that back in the UK I don’t have a clue where top politicians stand on abortion, that it’s hardly even mentioned.

Amazing as it may seem, I feel nostalgic for the British political process.  For discussion that, however sleazily or simplistically, still focuses on things like taxation, healthcare, education, the Iraq war and the environment.  Here, the discussion is all about abortion, teenage pregnancy, lipstick, guns and where Sarah Palin gets her glasses.

Americans, and the rest of the world, deserve better than that.

Here, for what it’s worth, is some of the most insightful and funniest commentary so far. (Sorry I can’t embed a video as NBC has had all the ones on YouTube deleted).