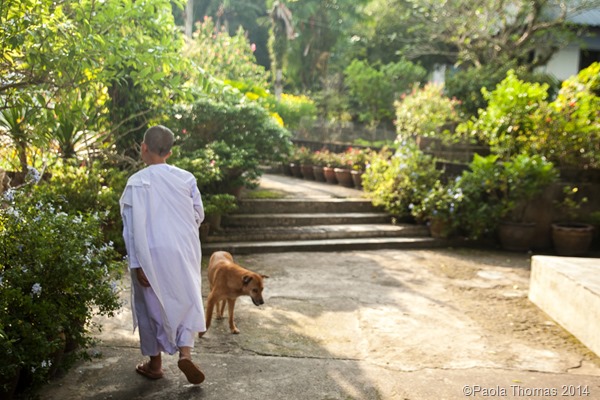 I’m not a particularly spiritual person, but like so much else in Thailand the unassuming, yet sincere, spirituality of the Thai people really got to me and provided much food for thought.

The Thais we met were so courteous and friendly, their smiles so wide and genuine and their kindness to each other and to the animals with whom they shared their streets so apparent, that it was difficult not to think that somehow our materialistic, hyper stressed, hyper angry Western society has got things very, very wrong.

I’m not so naïve as to imagine that life in Thailand is all rainbows and unicorns, but people in general did seem more relaxed, more satisfied and more genuinely happy than in any other place I’ve ever been. It’s had me thinking ever since. 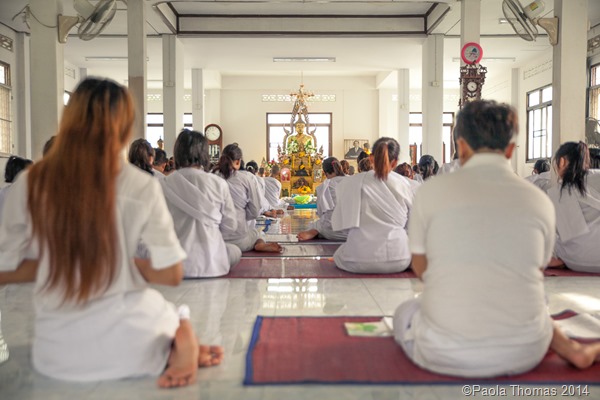 One of our most remarkable days there was spent with Chaya NaTakuathung who leads ‘Meet the Locals’ tours in Old Phuket. I started the tour thinking that we were going on some nonsensical fake tourist-y bullshit thingy and finished several hours later feeling like I’d had a profound spiritual experience. If you ever find yourselves in Phuket, don’t hesitate even for one second before taking a tour yourselves.

Chaya is a fiercely intelligent, immensely knowledgeable, super friendly guide who speaks perfect English and is driven by a genuine desire to show tourists a side of Phuket that only the locals get to see. 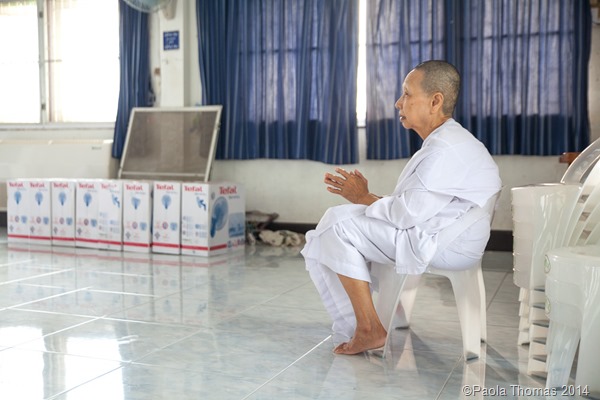 She squealed with delight when she discovered that our group was just women, as that way she could take us to visit a local Buddhist nunnery, where no men are permitted to enter.

The nunnery is an oasis of tranquillity in the middle of the noise, chaos and bustle of Old Phuket. As we walked through the carefully tended gardens, the traffic noise seemed to melt away, together with our Western preconceptions and anxieties. The rhythmic chanting of the nuns at prayer was immensely moving and contemplation seemed easy in this simple, serene environment. I understood nothing, but didn’t need to, the energy in the room was enough. 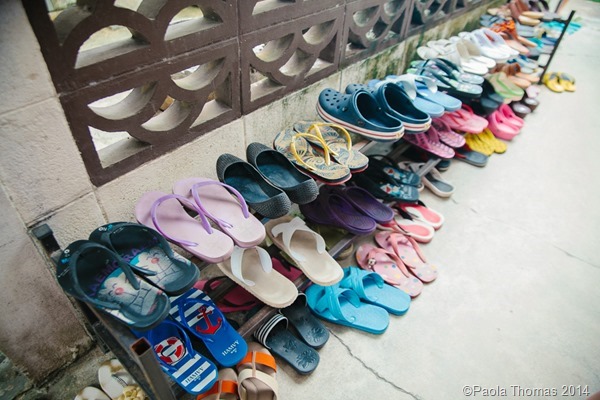 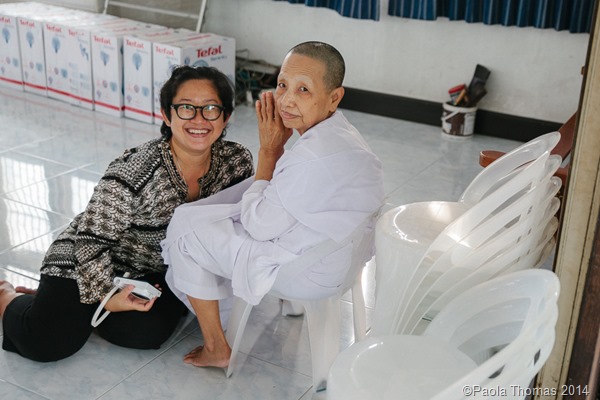 The nuns there were a mixture of permanent nuns and women on longer term retreats – as signified by their shaven heads – and other women and girls who were just attending on a short term basis, for short retreats or for counselling, who can keep their hair as it is. Chaya herself had spent many retreats at the nunnery and you could see that there she was surrounded by friends and mentors. 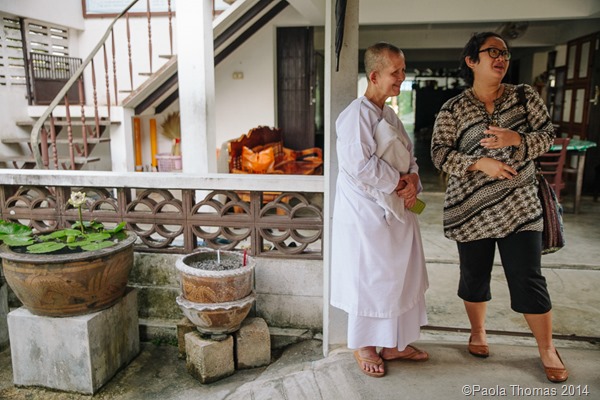 And I started to realise how smart it is, to have a place where you can just go for a few days when you need to regroup and recharge your batteries; where teenage girls can receive advice from wise older women or where you can just spend some time thinking and relaxing and contemplating and praying. I had ended up paying thousands of $$$ for that retreat experience and it still felt like a wacky and self-indulgent thing to do. Instead in Thailand it is an ordinary part of everyday life. They understand that sometimes we all need a bit of down time, simplicity and space for contemplation.

Time just to sit, hang out and finally smell the flowers. 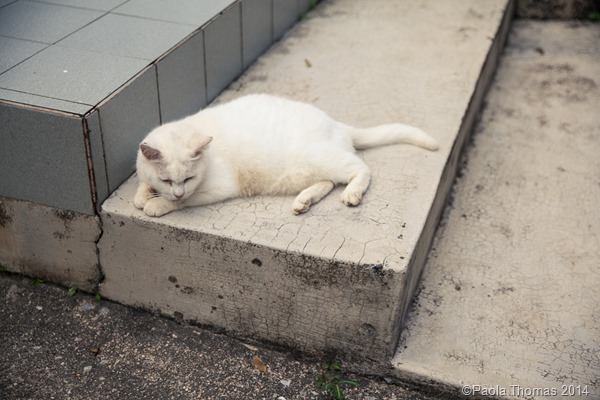 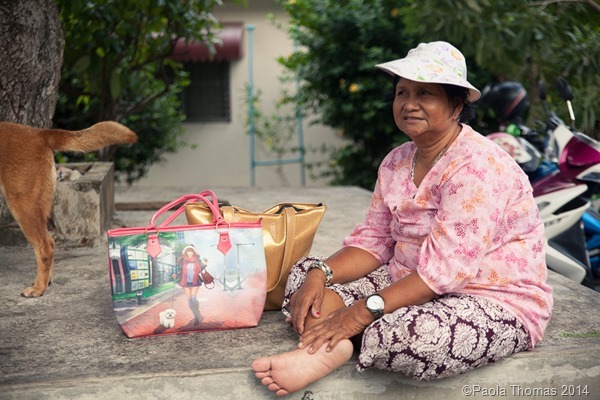 After a visit to a temple and an excellent meal, Chaya then took us to visit the village of the sea gypsies, or chao le (people of the sea) in Thai. 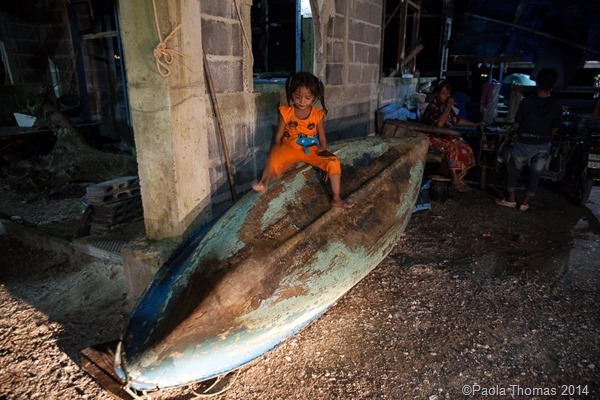 The chao le are a nomadic people of Polynesian heritage and strikingly different in build – much taller and sturdier – than the diminuitive Thai people. They used to live out to sea and come to land only rarely but in recent times they have created one or two settlements along the coast of the Andaman Sea, though they still make their living by deep sea fishing, diving deep without scuba equipment. 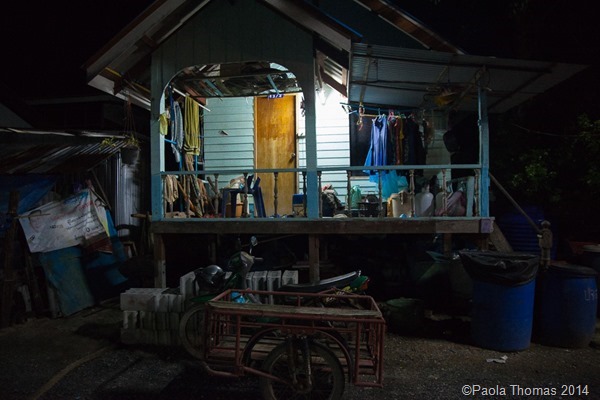 Their village was destroyed by the 2004 Indian Ocean tsunami, but they didn’t lose a single member of their tribe. When their elders saw the sea draw out dangerously far from the coast,  their deep understanding of the sea meant that they recognised the warning signs and urged their people to move to higher ground. 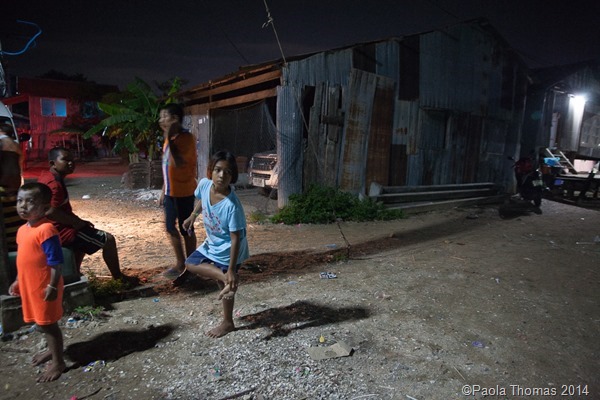 Their rebuilt village is nothing but a shanty town, and the people are obviously heartbreakingly poor, but after a while you stopped noticing the shabbiness. What I shall remember more is how clean the kids’ clothes were, how litter was bagged up neatly for disposal, how everyone was smiling and laughing. Soccer balls were being kicked, kids of all ages were playing together and whole families lounging on their verandahs waved and smiled and invited us into their homes to share their evening meal. 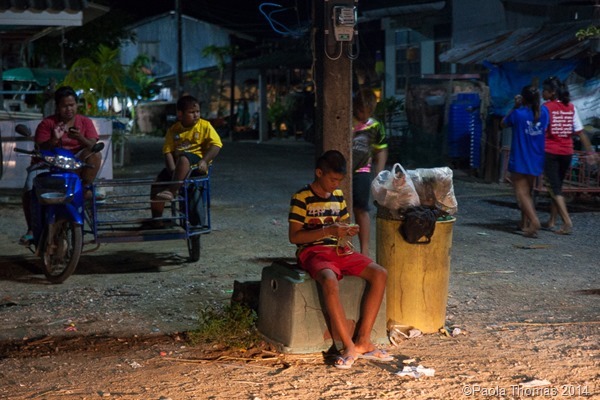 And as I watched, I started to understand that these people were rich. Rich in wisdom, in generosity, in friendships and fun, and that maybe it is we who are the poor ones.

At the nunnery my soul had been touched, with the sea gypsies it was my heart. In both places, and very in different ways, I had been shown the wisdom of simplicity, of community, of sharing, of smiling, and that maybe our relentless chase after the material has left us Westerners greatly impoverished as a result.