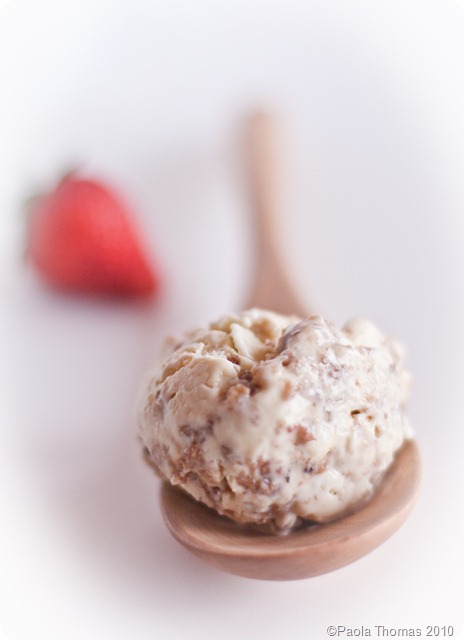 A week or three ago I was honoured to be invited to an ‘Ice Cream Social’ at the home of Seattle Bon Vivant. ‘Viv’ doesn’t blog much anymore but she is a huge presence on the Seattle foodie scene and I knew I was going to be in exalted foodie company.

So which ice cream to make? I wanted something that would be unusual enough to intrigue an American foodie crowd; something either very English or very Italian to reflect my heritage, and of course something utterly delicious. And that’s when I remembered Brown Bread Ice Cream.

This ice cream is as British as it comes, apparently made by the Victorians, and still served today in British restaurants and gastropubs, though you won’t find it in a British supermarket  (why on earth not? – Ed)

It’s also pretty quick and simple to make. I used Gordon Ramsay’s recipe here as my base but made several changes.

1 tsp vanilla extract (Gordon uses a vanilla pod, if you have one refer to his recipe above) 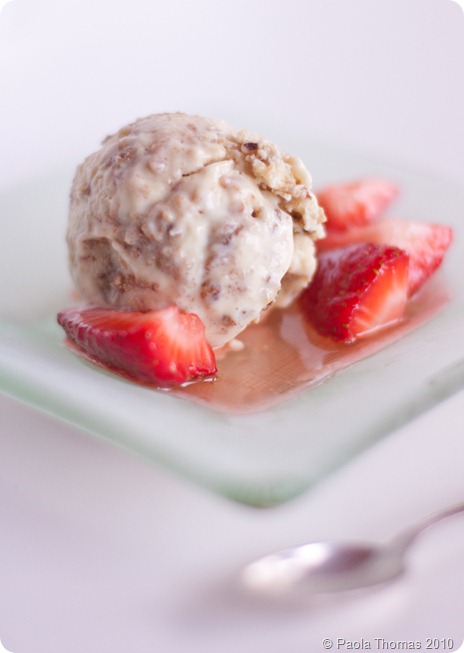 – Make brown breadcrumbs by slicing thick slices of your wholemeal loaf, removing the crusts, letting them go stale over a day or two and then whizzing them in a food processor. If you’ve forgotten to let them go stale, just bake them for 30 minutes or so in a very cool oven before whizzing.

– Add the same weight in light brown sugar to the crumbs. I forgot to make precise cup measures., sorry. Suffice to say that you should make LOTS of the caramel breadcrumbs as they are delicious stirred into any shop-bought vanilla; so just make loads, keeping the weight of bread and sugar the same.

– Grease a baking tray with a little olive oil using a pastry brush or spray. Spread out the breadcrumbs and sugar and cook for 10-15 minutes or until the sugar caramelises. I burnt my first batch, so for the second batch I stirred the bread crumbs with a wooden spoon every 3 minutes until they were crunchy and caramelly – about 10 minutes in my oven. I highly recommend doing this. Watch the crumbs like a hawk anyway.

– Leave the crumbs to cool. When they’re cool, bash them with a rolling pin or meat tenderiser or similar, so that they’re crumby and not all clumped together.

– Whisk the egg yolks and caster sugar together in a bowl until thick, pale and creamy and then whisk in the cream, milk and vanilla extract. Transfer to a thick-based pan and cook gently over a low heat until the mixture coats the back of the spoon. Pass through a sieve if you’re feeling fancy.

– Cool in the fridge overnight. Gordon forgets to mention this, but it’s imperative for my ice cream maker (the Kitchen Aid ice cream attachment)

– Pour the custard into your ice-cream churn and, just as it starts to set, add the breadcrumbs and churn until they’re stirred through.  Then put in the freezer to freeze completely. This ice cream benefits hugely from twenty minutes ‘ripening’ in the fridge before serving.

– I served mine with strawberries marinaded in sugar and lemon juice.

– If I were you, and if you were going to serve this to adults only, I’d definitely experiment with adding a splash of Baileys or Irish whiskey to the mix instead of vanilla.

If I say so myself this ice cream was super good – dense and rich, with a sweet chewy nuttiness – and it was fab to see the change come over some initially highly sceptical faces at the Ice Cream Social.