It's funny the things you end up missing as an expat.  Who would have imagined that glace cherries would be among them? But I haven't been able to find those ridiculously sweet and sugary candied fruits in US supermarkets, until a few weeks ago when I found a pot in DeLaurenti, Seattle's legendary Italian deli. 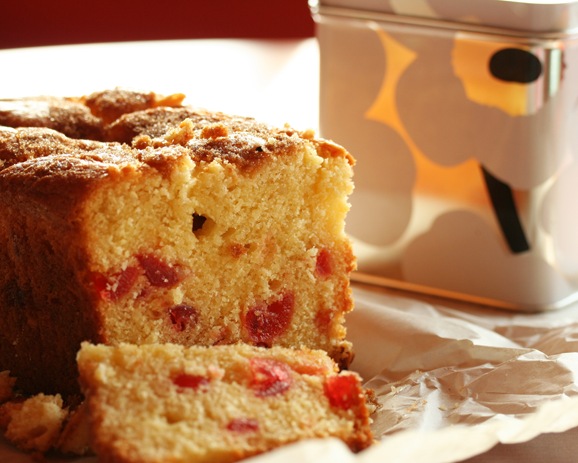 So the Minx and I set to with a will to make Nigella's Cherry Almond Loaf Cake from How To Be A Domestic Goddess, mostly so that the Minx would get to experience that quintessentially British childhood cooking experience of shoving as many sickly sweet and sticky cherries into her gob as humanly possible.  It is no coincidence that Jane Brocket from Yarnstorm's new book on classic childhood cooking will be entitled Cherry Cake and Ginger Beer. 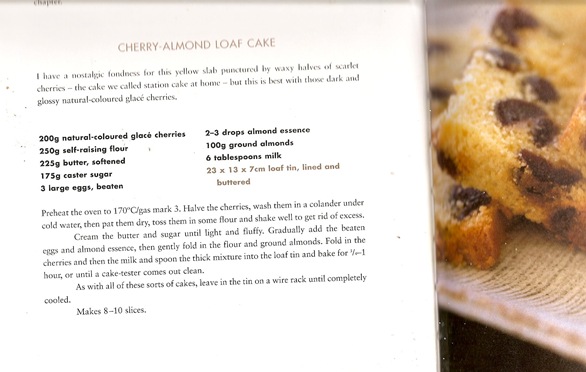 Note that my precious cherries were of the traditional lipstick scarlet variety and probably full of unmentionable additives.   Nigella suggests using the more natural dark red ones, and yes, Nigella, I would if I could. 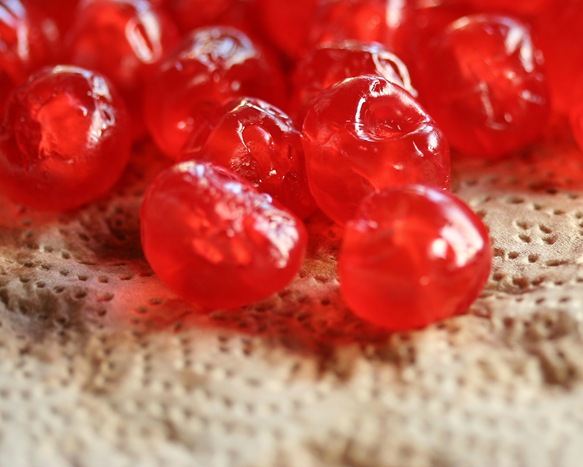 Cooking from a UK book in the US is not without its challenges. You will notice that UK books use metric measurements instead of cup measures (to which I have become entirely converted since living here).  So I first had to fiddle with my scales to stop them weighing in pounds and ounces.  (The hyperlinked recipe above gives quantities in cup measures, presumably from the US version of HTBADG).

Self-raising flour also doesn't exist in the US, so I had to refer to the Internets to find out how to make it from plain flour (add 1tsp of baking powder to every 125g/4oz of flour according to Good Housekeeping). And then I had to use the Internets again to find out how to convert centigrade temperatures to Fahrenheits. Can someone somewhere please unify all these measures immediately? It really is doing my head in.

But the resulting cake is one of those quietly delicious cakes that you appreciate much more in adulthood.  I had to add a brown sugar crust (not exactly a hardship) to appease the Minx's disgust at the lack of 'sprinkles'. And yes, the cherries did sink towards the bottom of the cake, as is only traditional and right.