I think we’ve talked about his before, but American dairy products are different.  Butter is less rich, and the creams have less fat content and, to my great chagrin, thick spoonable, dollop-able creams (I adore the word ‘dollop’) just don’t exist. And nor does clotted cream. 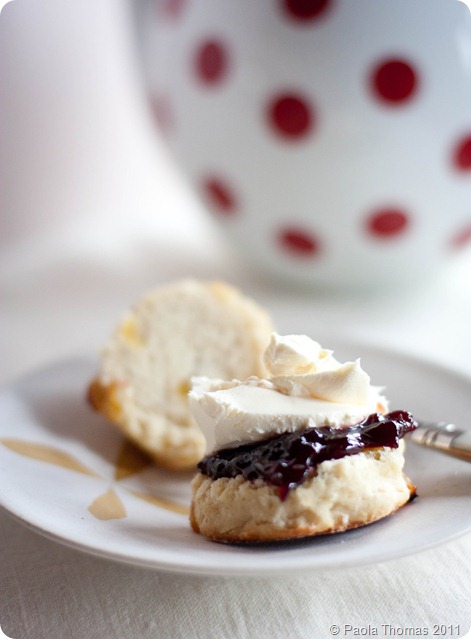 This thick spreadable 55% fat cream is even quite difficult to find in London – it’s a speciality of England’s West Country, and should ideally be consumed in a little teashop somewhere in either Devon or Cornwall at a table heaving with flimsy bits of chintzy china and mismatching embroidered napkins.

I haven’t been able to track it down at all in the US, but last month on our trip to Vancouver, I was thrilled to see it offered as part of the afternoon tea at the Shangri-La, and even more thrilled to be given some as a gift by Stéphane, the world’s loveliest concierge. This month, the wonderful Viv made a return trip to the Shangri-La and came back bearing more clotted cream from Stéphane. Truly I am lucky in my friends.

Clotted cream should be eaten with freshly made, billowy soft, barely sweet scones. It’s taken me a long time to track down a decent scone recipe but this one from the BBC website is really good. It uses buttermilk, which is slightly unusual,  but gives the scones a delightful airiness and slight bite.

A little extra flour for rolling and dusting

Take a big mixing bowl and add the flour, baking soda, salt and butter. Chop at the butter roughly with kitchen scissors or a knife, and then rub it into the flour. Aim for a reasonably fine crumb but don’t rub it in too much or the scones will be dry.  Remember to lift your hands high in the air while you’re doing this to aerate the mixture.

Stir in the sugar.  I added two handfuls of golden raisins (sultanas) at this stage. They’re entirely optional or else you could also use normal raisins or currants.  Don’t use too many or you’ll weigh the mixture down.

Make a well in the centre of the flour mix and pour in nearly all of the buttermilk and milk. Stir the mix with a spatula until the milk is absorbed and then bring it all together with your hands. The dough should be very soft, almost sticky. Use the last remaining buttermilk and milk to bring together all the flaky bits at the bottom of the bowl if necessary.  Use a light touch at this stage.

Dump the dough on a lightly floured work service. Knead just enough to get rid of any cracks and then pat it down gently until it’s a least an inch (2.5cm) thick.  Take a round cutter – the size is up to you, I tend to make mini ones, and cut out your scones. The cutter makes a delightful sighing sound as it pushes through the dough. Gather up the trimmings,  pat together again and cut again until all your dough is used up. You should have enough for around 5-6 large scones or 10 mini ones.

Here are my little honey bunches excitedly waiting to go into the oven. 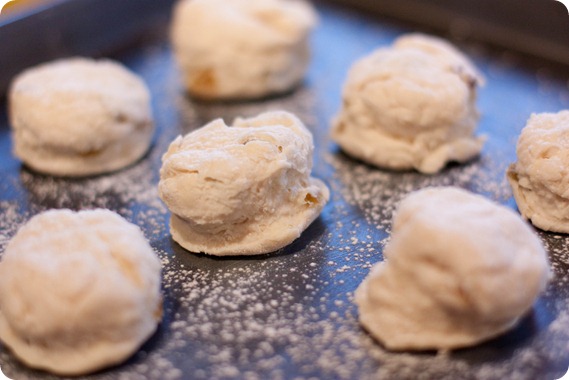 Dust with flour and bake in the oven for around 10-12 minutes until risen and golden.  Cool on a wire rack.

Serve as soon after baking as possible with jam and a generous dollop of clotted cream.  Strawberry jam is traditional but I used the very last of last year’s cherry jam from our tree and they were incredibly delicious

I always serve mine the Cornish way with the cream on top. Apparently Devonians put the cream first and then the jam. This is supposedly the subject of much fierce debate in the West Country.

My awesome red spotty teapot is from Rosanna Inc (which I didn’t know was a Seattle-based company) via discount site RueLala. If you still haven’t signed up for lots of lovely bargains, here’s an invitation.

Shopping Notting Hill – Part 2
< Things I Am Loving – Alessi Tigrito Cat Bowl
And the Winner Is! >