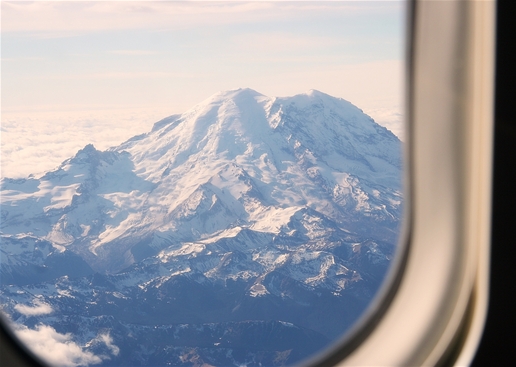 The ‘Mountain’ was most assuredly ‘out’ as we flew into Seattle

Apologies for lack of bloggery in recent days.

Our flight back was delayed due to the Husband mixing up the plane times and us having to spend Thursday night in an airport hotel at LaGuardia.  His ‘you owe me big time’ points total has accordingly gone off the scale.

Jet lag has also been surprisingly bad this weekend, with the whole family being utterly exhausted.  It scarcely seems natural or right to have jetlag without even leaving your own country.

It was interesting to be back in New York. Until this year, most of the time I’d spent in the States was in the Big Apple, but now I can appreciate how different it is from the rest of the US.

I’m a big city girl at heart, so I loved the hustle and bustle, the noise, the energy and the melting pot cosmpolitan mix – of all the cities I’ve been to in the world it definitely has the most London-like vibe.  It was great too, after spending a year in Seattle’s outdoorsy, fleece ‘n jeans culture, to see some seriously cool, kick-ass clothes out on the streets. And to be able to eat top-notch Italian food.

What was interesting though, was how struck I was by the rudeness and dirtiness – things which as a Londoner had never bothered me before – after the pleasantness and helpfulness of Seattleites and the cleanliness of their city.  Maybe Seattle is turning me into a softy?

The downside to the trip, as ever, was having absolutely no time to shop at all, which was frustrating as I was desperate to work my way through Grace’s Brookyn Shopping Guide.  The Husband’s business commitments meant that I had the Minx in tow pretty much all the time, and although she has become much easier to sightsee with (she can walk further and follows directions somewhat better), in my experience interiors shops and nearly three year olds do not mix.

However, I have come to the momentous decision that now that the Minx is more grown up I can start visiting some trade fairs in New York and on the West Coast, and spend some time enjoying the cities on my own.

The only problem is I have no idea where to start. Can someone tell me which are the best fairs for top quality homewares, interior design and gifts – the equivalent of Top Drawer, Pulse or Decorex in the UK or Maison et Objet in Paris?

Out and About in Palm Springs

California Dreamin’
< Miss Liberty
And so I’m back… >