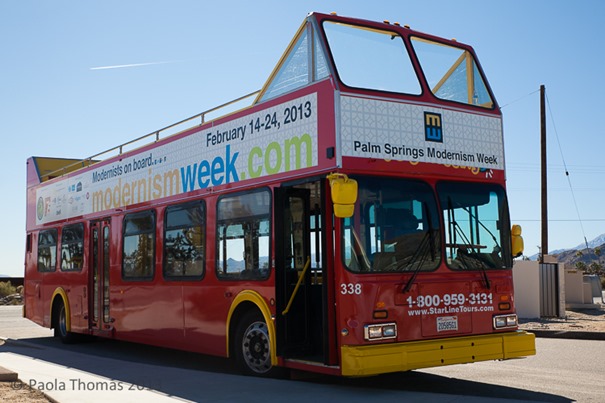 Though they were officially sold out, I was lucky enough to squeak my way onto one of the famous Modernist Week bus tours.  Apparently if you show up on the day of the tour there’s a good chance of getting on one thanks to no-shows.

I can’t recommend a tour highly enough if you happen to be in Palm Springs for Modernism Week.  They’re a great way of getting a real sense of the unique architectural history of Palm Springs and spying on some truly FABULOUS houses.

Come and join me for a trip. 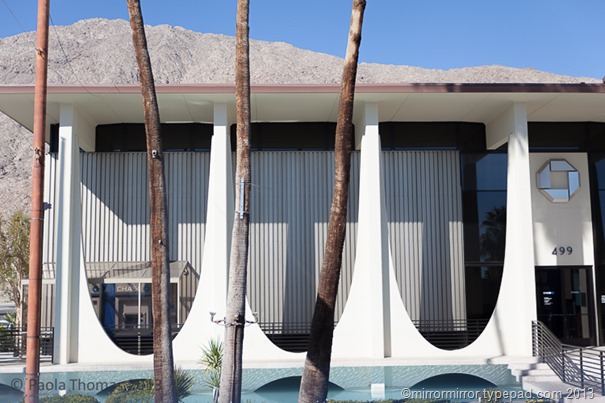 The iconic now Chase bank designed by E.Stewart Williams (who also designed the Edris House) in 1960. 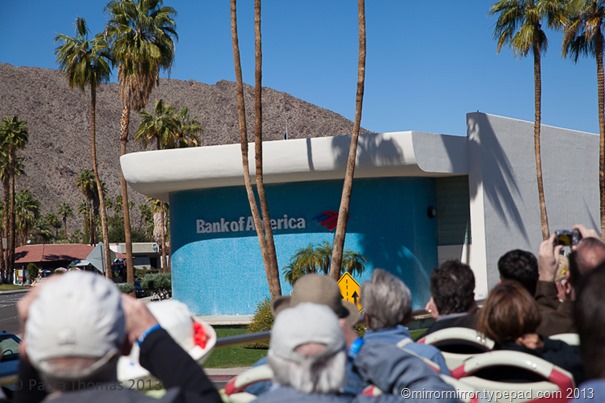 The Bank of America building with its famous blue mosaic wall built in 1959 by Victor Gruen Architects. 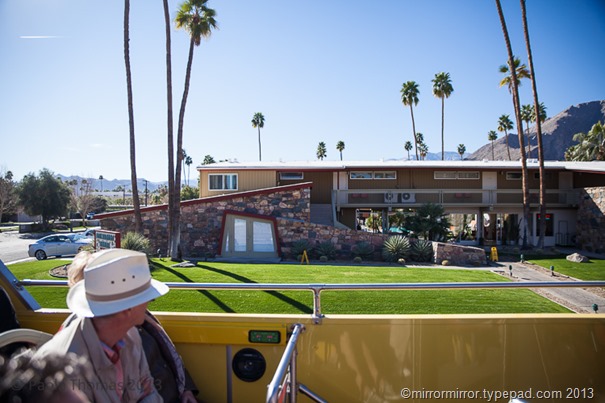 The Del Marcos Hotel, one of the earliest examples of Palm Springs modernism, built in 1947 by William F Cody. 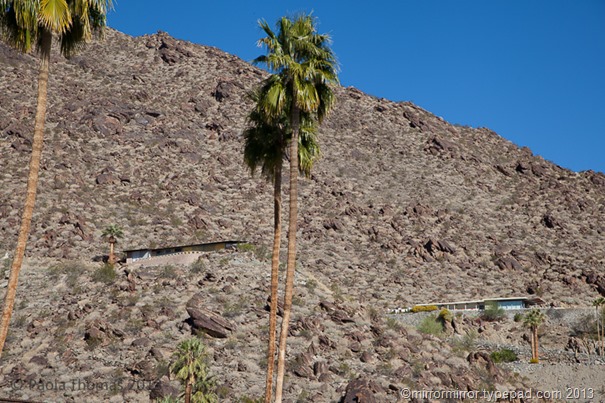 This is as close as I got to the world-famous Frey House II, perched in the mountains and designed by Albert Frey in 1963 to blend into its surroundings. Would have loved to have visited this one. 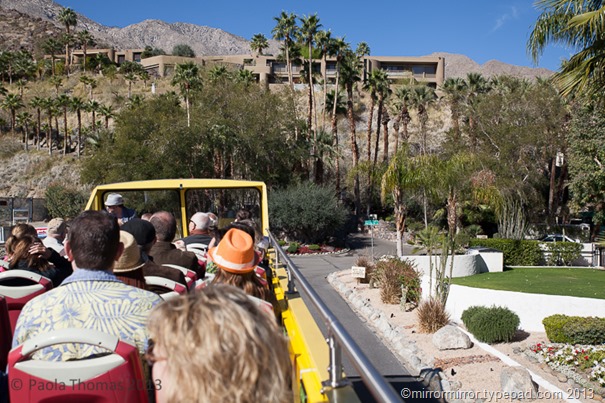 This rather ugly sprawling monstrosity apparently belongs to Barbra Streisand. She didn’t wave. 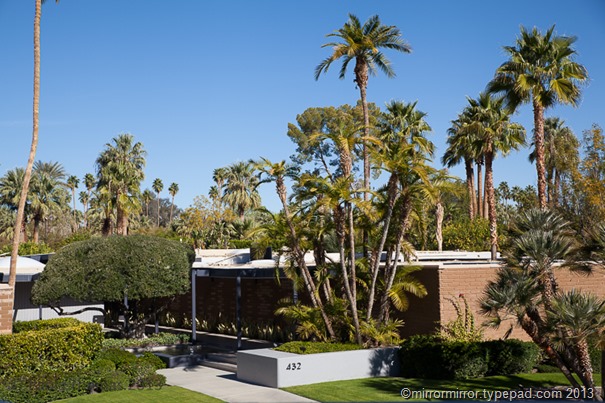 This gorgeous house was built for Dinah Shore by Donald Wexler in 1963. I’ve found some fun photos of the interior that I will share soon. 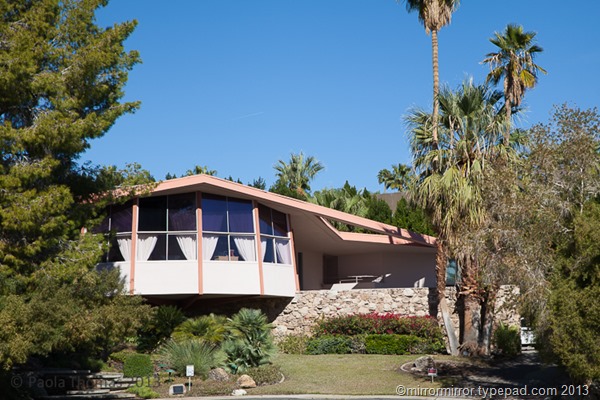 Dubbed the “House of the Future’ and designed by William Krisel in the early 1960s, this is the hideaway where Elvis and Priscilla Presley spent their honeymoon.  The fabulous Alix Tyler of Modern Kiddo (and previously Strawberry Lemonade) wrote a great post about the interiors and the Elvis connection a couple of years back. 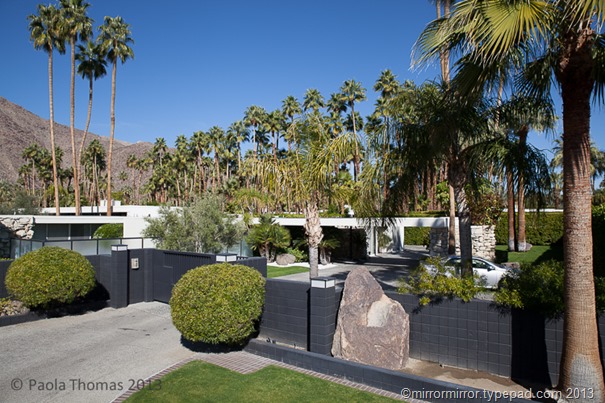 We also saw some groovy private houses built in Modernist style.  The great thing about Palm Springs is that the style is not just restricted to a few iconic houses but covers whole neighbourhoods. 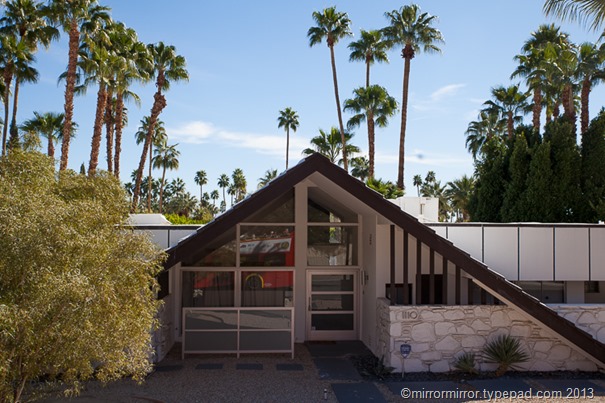 These houses with steeply-pitched roofs are called ‘Swiss Misses’. 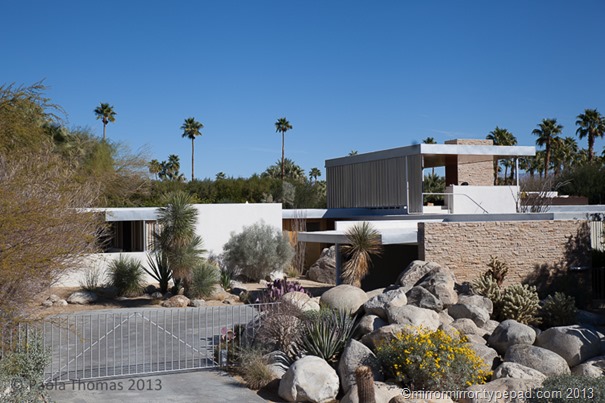 Here is world famous Kaufman House built by Richard Neutra in 1946. Must find my way in there one day. 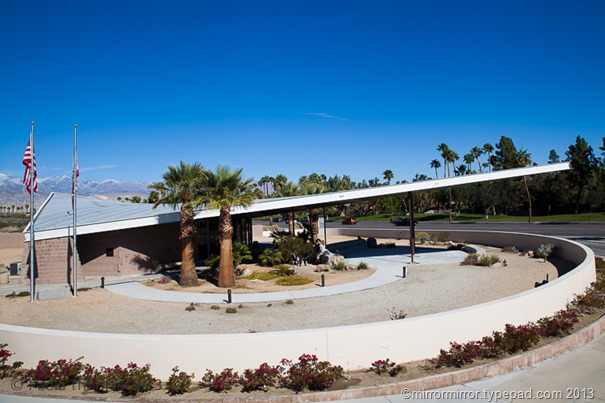 And this repurposed gas station is the Palm Springs Visitor Center. 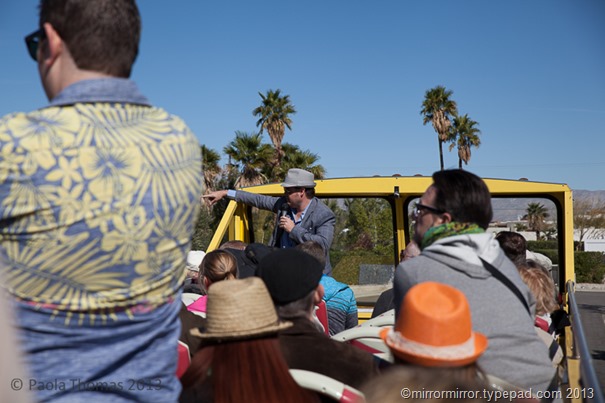 Here is our lovely tour guide.  He knew everything about everything to do with Palm Springs. 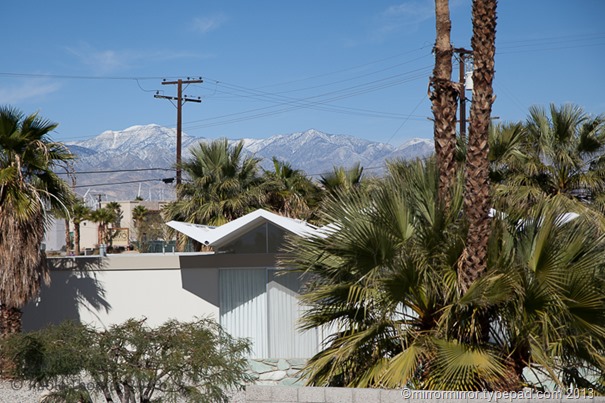 A very bad picture of a zigzag roof.  It’s in there somewhere. 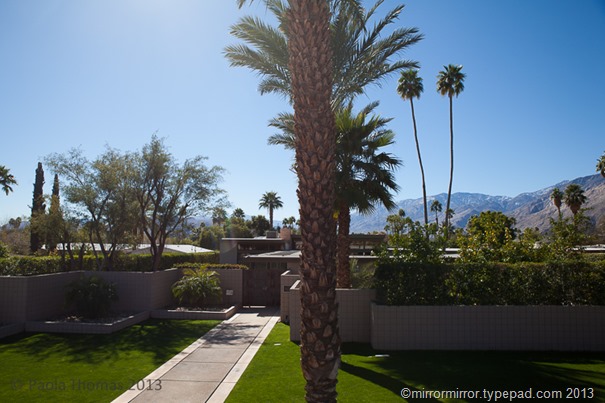 Frank Sinatra’s house, Twin Palms, designed in 1947 also by E. Stewart Williams.  Apparently he had to be persuaded hard to get a house in the Modernist style. Now it is impossible to imagine him in anything else. 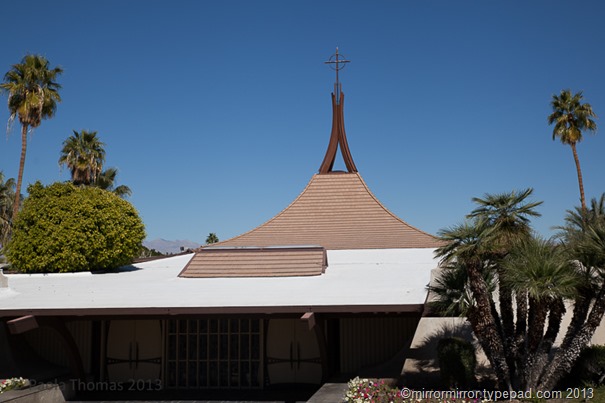 The beautiful Catholic church of St Theresa (where the funeral of former Palm Springs mayor Sonny Bono was held, with a eulogy by Cher). 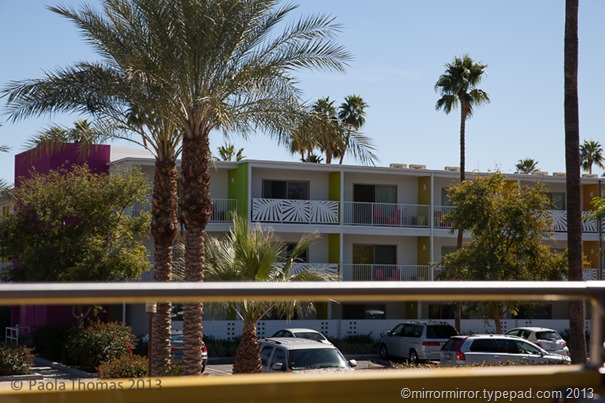 A former 1960s hotel has been refurbished as the splendidly-colourful Saguaro.  We took a peek inside one day and it looks fabulous. 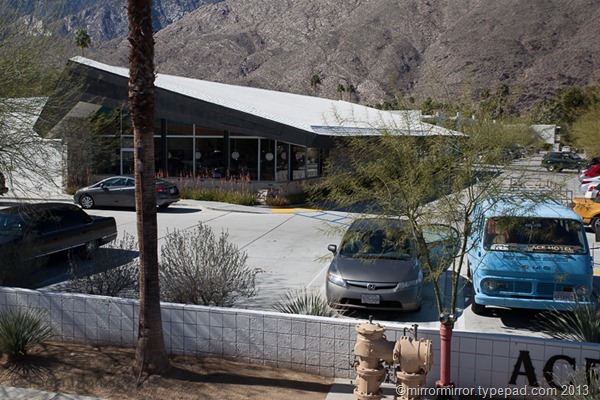 We again stayed at the Ace which was repurposed from a old Howard Johnson motel (as immortalised in the most recent season of Mad Men). 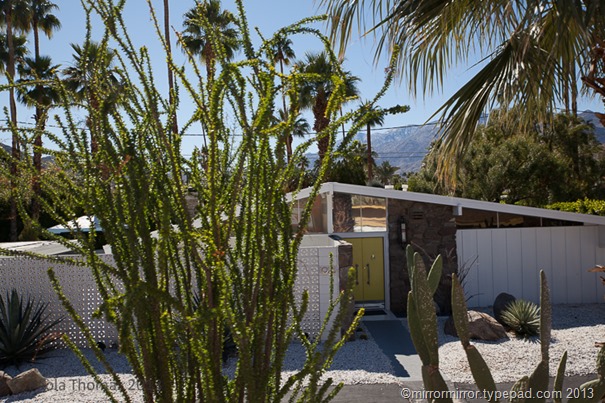 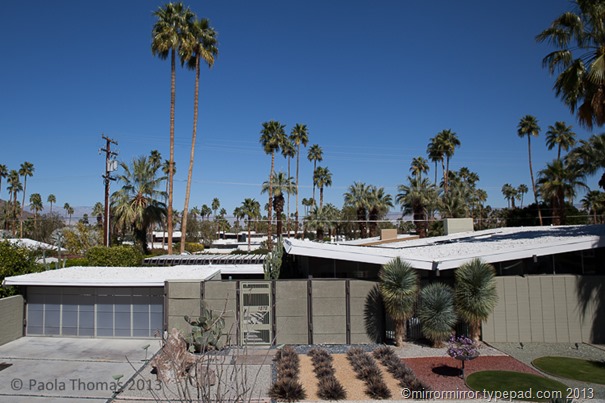 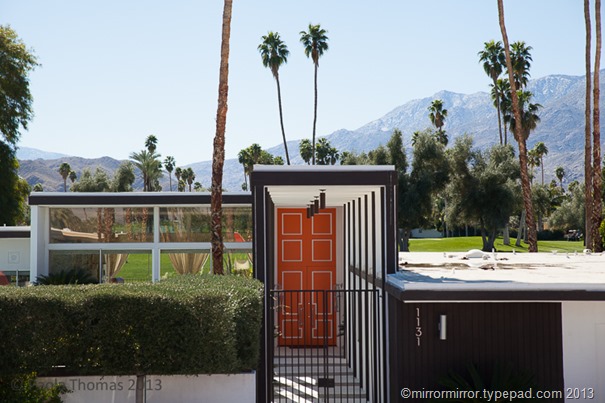 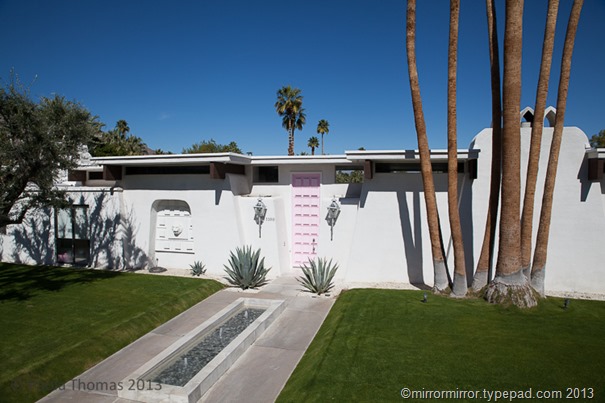 I think I’d better stop now.  I have literally hundreds of photos from this tour, but I suspect my blog is about to explode.

A Shopping Trip to Portland: Part 2