Off to the US Embassy in Grosvenor Square today to finalize our visa application.

Grosvenor Square in the heart of Mayfair is one of London’s largest and most beautiful squares. But now the area round the embassy is surrounded by a cordon of heavy concrete blocks, the embassy itself is surrounded by temporary and ugly metal fencing, and heavily armed police are patrolling in all directions. British police aren’t usually armed, so it still comes as a shock to see policemen brandishing the latest in automatic weaponry. 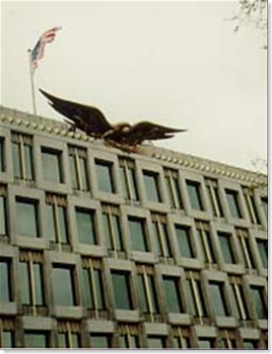 Armed with dozens of forms in triplicate, and photographs that made us look like the Baader-Meinhof gang (the Minx looks particularly evil), we presented ourselves at the end of the first queue outside the building. And were then led to another queue.  And then another queue. Only then were we allowed into the building via airport-like security, checking in laptops and mobile phones along the way.  No liquids or cosmetics are allowed.

Once inside, the process was actually more efficient than we’d feared – a couple of hours waiting in a cavernous waiting room, fingerprints taken and re-taken, forms and photographs double and triple checked, followed by a rather cursory interview (am I being cynical in thinking that our skin colour might have had something to do with this?)

As we left the building we were directed for the first time past the imposing front staircase, and marvelled that once upon an innocent time, passers-by must have been able to walk up and down these stairs as they pleased.  Now no passer-by can get within 30 yards of the building, brooding behind its concrete and steel cordon.

Isn’t it sad to think that – according to this very interesting article –  the building was initially conceived as an embassy and cultural centre – with people popping into the library to learn more about American culture, attend a jazz concert or visit an art exhibition?