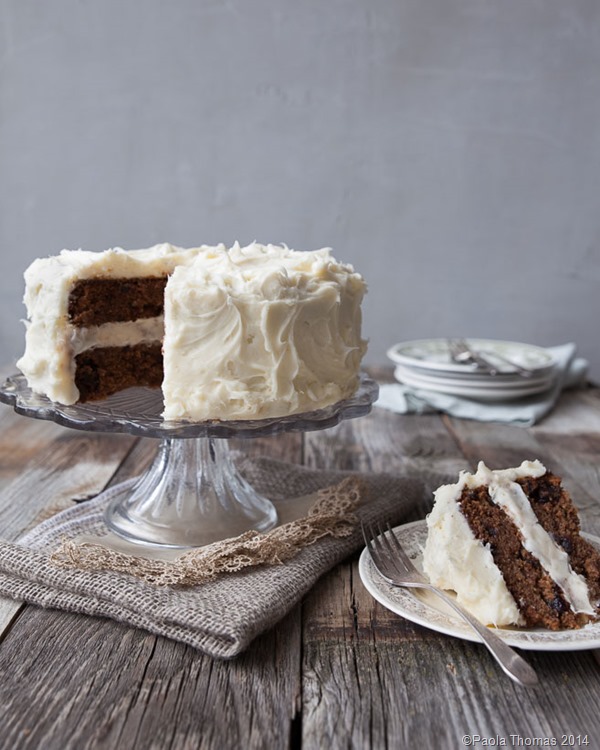 As promised many moons ago I can now finally reveal my recipe for the Parsnip Cake that debuted back in Edible Seattle in January of last year. Editor Tara and I wanted the cakes in this series to make the most of seasonal, local fruits and vegetables, which hugely limited our scope in January when all that seems to be available round these parts is mountains of kale.

We started playing with the idea of root vegetables and I remembered a carrot cake I had made for the Minx’s first birthday party back in the Dark Ages. The cake I had in mind was a  moist, squidgy cake, dense with raisins, and warmed with spices and maple syrup  – a comforting wintry sort of cake, made all the more so by snowy swirls of cream cheese frosting on the top. And then we started toying with the idea of substituting parsnips for the carrots.

It seems obvious that carrots can be added to cake – their flavour is delicate, sweet and clean and they are delightful eaten raw. Raw parsnips on the other hand are not so obviously appealing – the flavour is woody, less sweet and just deeply, deeply vegetably. So it was with some trepidation that I lifted that first test cake out of the oven. I needn’t have worried, the alchemy of baking had worked again. The parsnips had roasted within the cake to become soft, sweet and totally unrecognisable as parsnips, just adding an intriguing smoky undertone. Make this cake and I defy anyone to identify the secret ingredient. (The Minx adores this cake BTW).

I made a couple of other changes and substitutions, most notably replacing the raisins with tart dried cranberries, as they seemed more seasonal, and I liked the idea of cutting the rich sweetness a little.  A cream cheese frosting, as is usual with carrot cake, seemed to be the way to go, adding another little tang to cut the sweetness, but this time I experimented with browning the butter and adding some bourbon to bring out the smoky woodsiness the parsnips had added to the cake. I warn you now, this frosting is like crack on a spoon. 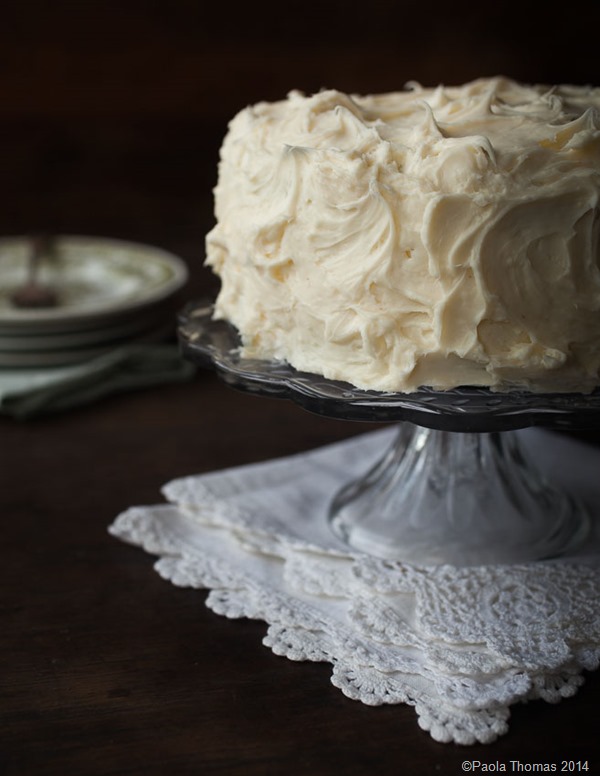 The photography process was interesting too.

Following Tara’s art direction I started experimenting with something fashionably moody and almost Rembrandt-y in its lighting, but that seemed too spare and gloomy for this simple cake with its dark interior and plain white frosting. I decided instead to go for a lighter, cool blue grey palette instead, which would contrast with the rich browns of the cake, but seemed wintry in a more hopeful way and layered on the textures – weatherbeaten wood, rough burlap, vintage lace and hard glass to contrast with the soft sumptuous swirls of the icing. 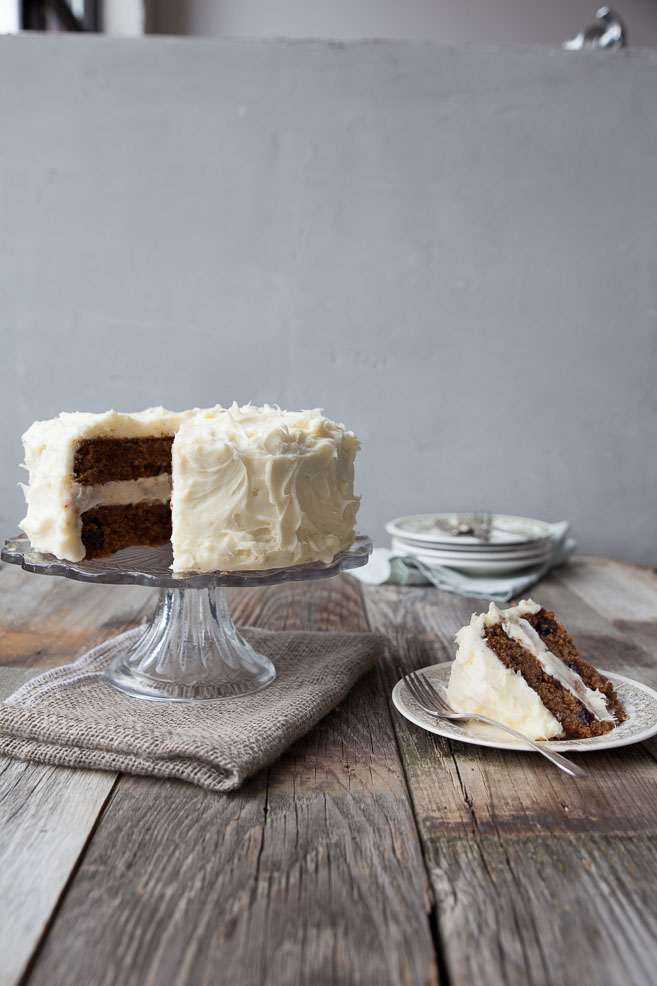 We decided to slice the cake to make it more interesting and so it didn’t end up being just a giant white blob, but getting the slice positioned correctly was a challenge. Too far forward and the slice was in focus but the cake looked like a heap of mashed potato, too far back and the cake looked lovely, but the slice looked unappetising. It took me many shots before I realised that both cake and slice had to be on the same plane of focus and that I had to position something WAAAAYYYYYY at the back to take the eye through the photo and get enough blur that it wasn’t distracting to the main event.

They both took some experimenting, but I ended up being delighted with how both cake and image ended up. And I suggest you root around (ha!) in your vegetable bin, find some parsnips and get baking. And without further ado, here is the recipe you need.

Roasting, or Searching for a Food Writing Style

Rhubarb Polenta Cake with Orange and Cardamom
< That Was the Year That Was–2014
Roasting, or Searching for a Food Writing Style >