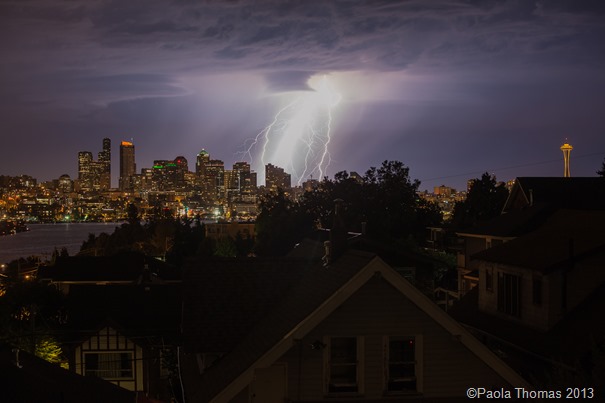 Finally getting a little time to catch up with myself and BREATHE.

Our vacation in Menton passed very successfully (yes, you will be inundated with pictures just as soon as I have time to process them) and father-in-law has been and gone.

The summer here in Seattle has been one of record-breaking and mind-blowing loveliness; day after day of clear blue skies, temps in the mid 80s, mountains and lakes sparkling in every direction, balmy warm evenings etc. etc. and we have been living on the beach, in the pool and up on the roofdeck.

The heady weather ended with a bang, literally, on Friday evening, when a massive thunder and lightning storm lit up the skies around Seattle. Because of the lack of humidity thunderstorms are rare round these parts, but this one was a doozy, with the lightning owning the sky like the 4th of July (with apologies to Katy Perry). For much of the time it wasn’t even raining directly above us, so I took the opportunity of getting out on the roofdeck (not as crazy as it sounds as the lightning was a still a long way behind the city at this point).

It’s the first time I’ve ever photographed lightning, but I balanced my camera on the railing, followed the rules for photographing fireworks and took a bajillion pix, pressing the shutter when I thought lighting was due rather than waiting for it to happen.

And yes, I got lucky.

If truth be told I find this sort of photography, though it gives spectacular results, to be the most unsatisfying kind of photography. It’s the very definition of ‘taking’ rather than ‘making’ a photo – I didn’t have to quietly observe, find interesting angles or perspectives, stalk the light or make compositional choices. All I had to do was own a good camera, have a nice view, find the right settings and then point and shoot.

Still, there’s a undoubtedly a satisfaction in taking photos like this off your card and I was thrilled to have one of my photos featured on the Seattle Times blog. I suggest you click on them to view them properly.  The blog format doesn’t really do them justice.

I’m sort of back blogging I think. After nearly a solid month of travel things are starting to wind down now and we have a couple of gentle weeks until the summer’s grand finale – the Minx is going to her first ever overnight camp! We will be without her for four nights. I think my entire parenting life has been gearing up for the moment.

Autumn Leaves
< Things I Am Loving: The Secret Garden
A New Dawn >