Apparently it takes a village to make a pumpkin pie.  Not a literal village you understand – who’s got one of those nowadays? – but an online village. 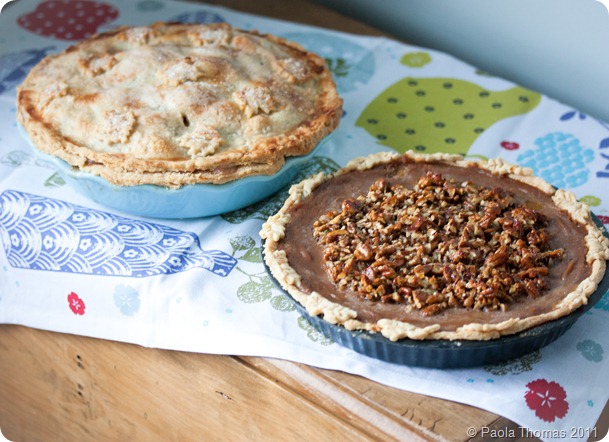 Having never made a pumpkin pie before; indeed having spent the vast majority of my life thinking that putting pumpkin in a PIE, instead of say, soup or ravioli, was a vaguely barbaric act;  I put out pleas on here, on Facebook and on Twitter for pie-making advice.

This was not entirely helpful.  As I mentioned, I mostly wanted to make a pumpkin pie because the Minx and I had managed to grow two little pumpkins in our vegetable garden this summer.  However, convinced by the many, many comments I received, I did buy an emergency can of pumpkin just in case.

Which was fortunate, as when we halved, deseeded and roasted the homegrown pumpkins, we found them to be extremely anaemic and tasteless. One up for the online village. 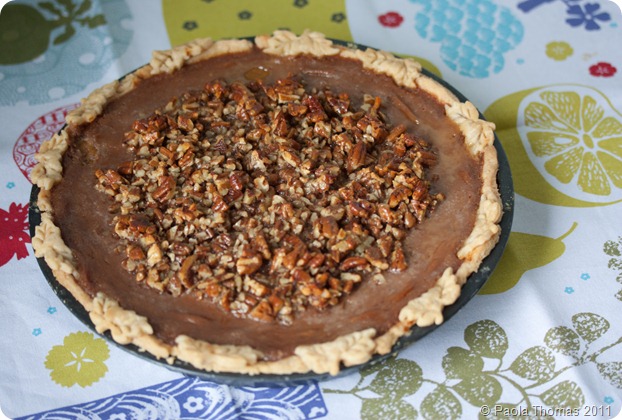 I received a lot of recipe suggestions but one that struck home was to use the one from the Macrina bakery cookbook. This sounded good because a) I actually have the book b) the recipes I’ve cooked from it before have been excellent and c) it included maple syrup in the pumpkin custard and a topping of pecans and maple syrup.  Since I don’t actually much like pumpkin pie, these sounded like good additions to me.  Here’s a link to a pdf of the recipe.

The Macrina recipe uses canned pumpkin and roasted fresh butternut squash (which we always have in the freezer to make risotto) which are both comparatively smooth.  Nevertheless a few minutes attacking them with the immersion blender made them even smoother and creamier. Definitely a good thing to do whatever type of pumpkin or squash you’re using. 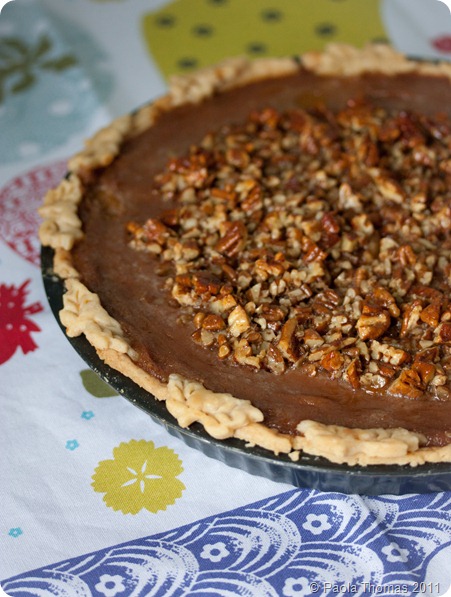 TOP TIP #4- USE COCONUT MILK IN THE CUSTARD

Another person to send me her recipe was Seattle pie queen Kate McDermott.  Her recipe is for a more traditional pumpkin pie, though it had one intriguing ingredient – lite coconut milk instead of cream or condensed milk.  I used it instead of the buttermilk in the Macrina recipe and Kate is right, the texture and flavour are exceptional,   I did of course also use Kate’s superlative pie crust recipe.

This top tip was invented by me! And I think it’s a good one.  Stem ginger, or preserved ginger in syrup, is a very traditional British preserve, which I managed to get on Amazon. The ginger pieces are preserved in a tangy ginger syrup and instead of freshly, grated ginger I added a little ginger syrup to the pumpkin custard and the maple pecan topping.  I’ve since seen that in the US you can also buy a delicious-looking ginger syrup here (with great packaging) which might also work.

This pie turned out incredibly well, and was wolfed down by pumpkin pie traditionalists AND pumpkin pie disparagers alike.  Thanks to everyone in my lovely online community who contributed the tips that made it possible.

I see that November has been and gone, and I’ve got nowhere close to posting every day. Oh well.  Might try for December, though posting over Christmas could be a little light (and possibly drunken)..

Out and About in Palm Springs

Palm Springs Uptown Design District Shopping and Dining Guide
< Smashing Pumpkins
Can You Tell What It Is Yet? >