Aka the lazy girl’s pie.

I’m always a little surprised that America, with its obsession with apples and fruit pies of all kinds, seems to be unaware of the humble and quintessentially British fruit crumble. After all it hits exactly the same comfort eating spots that pie does, but is much, MUCH quicker and easier to make. 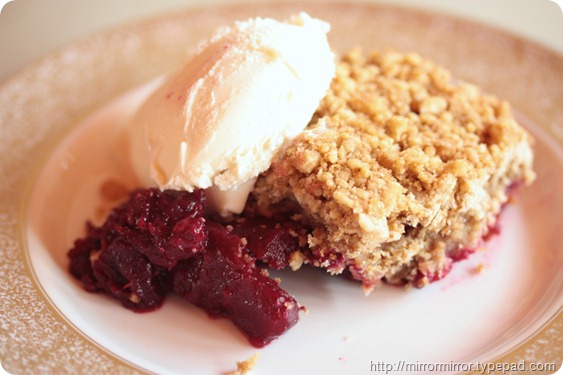 The Minx and I were casting about for something to bake yesterday evening when I remembered that I already had a bag of stewed apple and blackberry in the freezer, left over from a crumble session last autumn.

Crumble can be made with any sorts of stewed fruits though, either mixed with apples or on their own – plum, rhubarb, apricots, pears and raspberries – are all traditional British faves.

If I’m just using apples, I like to add a little cinnamon and some raisins; chopped nuts of all types – walnuts, pecans, almonds are also delicious. I’ve also eaten the most incredible crumble which added small cubes of vanilla fudge to stewed apples. 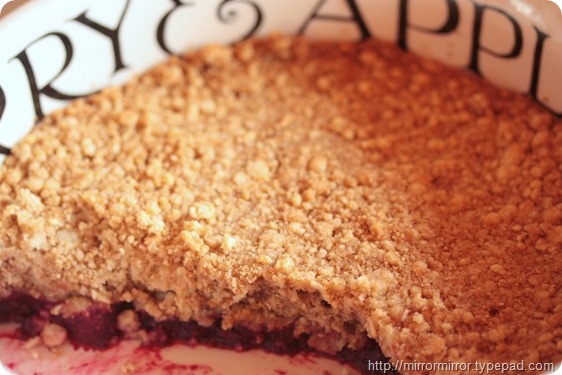 As the Minx and I already had our stewed fruit to hand, all we needed to do was make the crumble topping. I’ve found that about 2 cups of flour to 3/4 cup chilled butter to 2/3 cup sugar works well.

When I say flour though, you can go a bit mad at this stage and experiment with other dried goods. Last night’s crumble was made with 1 cup of flour and half a cup each of ground almonds and rolled porridge oats. Other ground nuts would be good, wholewheat flour is a nice addition and I’ve even thrown it spoonfuls of muesli on occasion. Granola, chopped nuts, crushed cookies and other flours and grains would be interesting to try.  Likewise you can also experiment with different types of sugar – last night’s crumble was made with soft brown sugar instead of white.

When you’ve customised your crumble topping ingredients, chop the chilled butter into the flour  with a pair of kitchen scissors and start rubbing it in as if you were making pastry.  Stop when it reaches the consistency of large breadcrumbs and stir in the sugar. If you’ve experimented with oats or nuts you may need to add some flour to get it to the right consistency. Don’t worry though, quantities are extremely approximate and the important thing is to get the right breadcrumb consistency. Kids love making this by the way – they can literally be very hands on but it’s over before they can get bored.

And that’s all there is to it. Put your stewed fruit in an ovenproof dish, top with the crumble topping, press it down gently with a fork and bake for about 45 minutes at 350 degrees F/180 C.  When it comes out of the oven it won’t look much different, just a little more golden round the edges, but it will be firm and almost crunchy to the bite.

Serve warm or cold with ice cream, cream or, if you want to be really English, CUSTARD. Here are a few crumble ideas including a recipe for homemade custard (most English people would just use Bird’s custard powder or buy it ready made).

UPDATE:  It appears that there exists in America something called an Apple Crisp, and looking at recipes, it does seem very similar to apple crumble (though the fruit is cooked at the same time as the topping? – Must try this, seems like even less work.) I thought it seemed strange that there was no equivalent. Having said which I haven’t come across it in Seattle, and we gave some crumble to our babysitter last night and she’d never had anything like it.