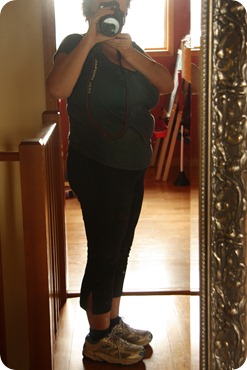 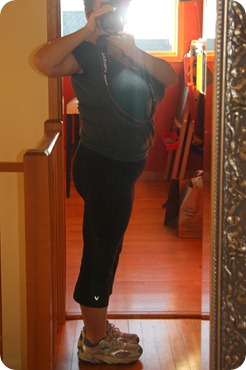 To be fair to my body, I did lose a couple of pounds in the first half of the month when I was working out a lot and being good, but slacked off a bit on the workouts and ate rather more than was necessary in the middle (which coincided with a certain time of the month, isn’t that always the way?) to get back to precisely where I started.

I definitely think I’m looking more toned though.  My workout regime this month has mostly been a mix of Jillian Michaels’ 30 Day Shred  DVD and continuing with Couch25K where I have now just finished week 4. Is anyone else still C25King along?

The Jillian Michaels DVD came very strongly recommended by Megan Not Martha and it is really good.  It’s a pretty tough workout which seems to cover all the bases (I’ve been alternating workouts 1 and 2 recently, haven’t yet plucked up the courage to try workout 3). The best thing about it though is that each workout is only 20 minutes long – so just when I’m really hating it, it finishes.

I’m REALLY enjoying C25K and can feel myself progressing from run to run.  I still run like a crippled geriatric buffalo but can now actually keep going at a slow but steady pace.  Week 5 is supposed to culminate with a 20 minute run which would have seemed impossible a few short weeks ago.  The really good news is that my plantar fasciitis has not got any worse and the torn ligaments in my right knee are just about keeping together (every run is painful, but not excessively so).  Of course, it would help enormously if I lost some weight. Do you hear that body?

In other fitness regime news, I have bought a Body Bugg!  You know those strange armband thingies that contestants wear on the Biggest Loser? What they do is precisely measure exactly how many calories you are using during the day (though if you still want to measure your daily calorie deficit you still have to upload intricate details of exactly what you’ve eaten).

I initially just bought the armband, which you wear all day and from which you upload your calorie usage and the number of steps you’ve taken to your computer. I was given a target calorie burn of 2250 per day (and 10,000 steps) which, if I ate around 1750 calories per day, a not excessively strict target) would mean losing about a pound a week.

I’ve been using it for a week or two and the results so far have been intriguing. Working from home as I do, and particularly now that the Minx is at school so I’m not running round after her all day, I can be INCREDIBLY sedentary.  On a normal sedentary day I only burn around 1700 calories, and one day burnt as few as 1450.  No wonder my weight has been creeping up slowly over the past few years! Every morsel I ate over 1700 calories was going straight to my humungous boobs (there have been a LOT of sedentary days in the last year or so).

Even 30 minutes of exercise added to my normal sedentary lifestyle only gets me to around a burn of 2000 calories a day, which would mean a very small loss if I exercised every day and maintenance if I exercised 3-4 times a week, which is EXACTLY what was happening. (And there I was wondering why a few hours of desultory exercise a week weren’t having any effect).

In order to get to 2250 calories, I either have to work out for an hour EVERY day, or add a lot more movement to my normal lifestyle (running up and down the stairs a bit more, taking movement breaks when at my desk, doing lunges in commercial breaks, going out for walks etc).

Here’s yesterday’s chart. I slept until just gone seven.  I spent the morning running errands and tidying up the house, went for a run around noon and then spent the afternoon at my computer and the evening watching TV.

The only problem with having just the armband is that I wouldn’t usually upload my data until the end of the day, so it was very easy to have a bad day and then think ‘oh sod it’ at midnight. So a couple of days ago I took delivery of the ‘digital display’  – a watch like thingy which you wear on your wrist and which tells you how many calories you’ve burned and how many steps you’ve taken – which has transformed my level of engagement with the device.  I’ve been using it the last couple of days and have hit my ‘burn’ on both days, by exercising and generally running around the house and walking in the neighbourhood a bit more. It’s scary to see how slowly the calories tick by otherwise.

So my aim for this month is to hit 2250 calories ‘burn’ EVERY. SINGLE. DAY and see if that gets things moving. Onwards and upwards! (It better work because it was pretty expensive).

It’s going to be interesting next week as we’re heading off on Sunday for Vancouver Island firstly to visit my friend in Victoria and then off to Tofino to stay at the Wickaninnish Inn. I’m hoping that walks on the beach will be enough as I find it doubtful that I will only be eating 1700 calories a day. Bloggery might be a bit sparse over the next few days as well.

That Was The Week That Was: NYC Edition