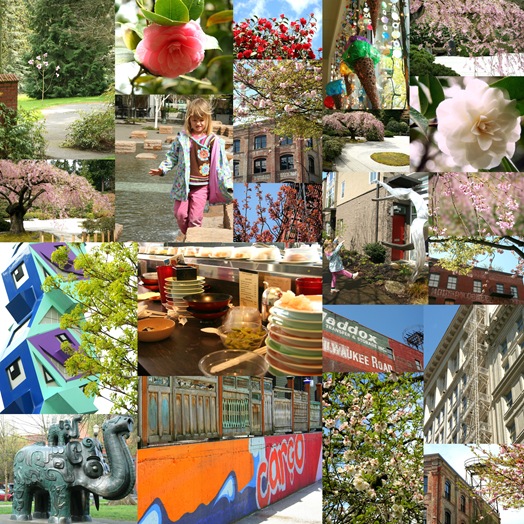 The setting isn’t remotely as naturally stunning as Seattle’s and we spent much of the weekend dodging rain and hail showers, but I came back with serious case of Portland envy.

The architecture is older and therefore more charming to my European eyes, the streets are narrower and more pedestrian-friendly and it just has a cooler and funkier urban vibe, despite being much the smaller city.  Just from the clothes people wear you can tell that Portland is a city of artsy types whereas Seattle is the ultimate city of geeks.

Thanks so much for the recommendations, here and on Facebook. Things we really enjoyed – apart from the hotel – include Habibi for great Lebanese food (we used to live near some great Lebanese restaurants in London and its something I really miss); Hot Lips Pizza in the Pearl District for seriously great tasting pizza; Cool Moon Icecream near Jamison Square (the perfect shelter in a hailstorm); Sushiland, also in the Pearl District, for good cheap conveyor belt sushi; Cargo for funky ethnic stuff; Knit Purl for YARN and of course Powell’s for books.  The Japanese Garden in Washington Park is stunning and the rose garden must be amazing when the roses are actually out.  Lots of amazing rhododendrons when we were there though.  I also found the Holocaust Memorial, which we wandered into on the off-chance, very moving.

Mostly though we spent out time wandering the streets, admiring the street art, riding the trolley buses and hoping that Seattle’s urban planners will someday turn South Lake Union or Georgetown into the Pearl District with better views.  Keep your fingers crossed.