Inspired by such Halloween geniuses as Nicole and Megan, the Minx and I set to work with a will yesterday to create our own fabulous pumpkin. 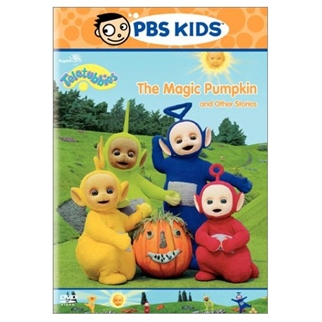 Actually we were even more inspired by that seminal work Teletubbies and the Magic Pumpkin which features a little video on how to make your own happy pumpkin. 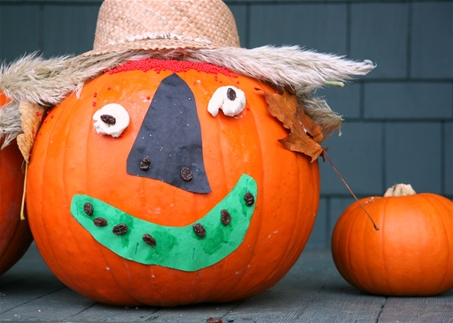 Ours has a paper mouth and nose (mummy really couldn’t be bothered to procure bark and felt as in the video), marshmallows and raisins for eyes, raisins for teeth and nostrils, leaves for ears, cupcake sprinkles for ‘eyebrowns’ and pampas grass for hair.  He is a very happy soul despite the fact that the morning dew made his marshmallow eyes rather soggy.

I knew Halloween was big in the States, but had no idea it was THIS big. The Minx has taken to trick or treating like a duck to water (surprising, not).

On Sunday evening a small witch (last year’s costume still fits hooray!) met up with an even smaller crocodile  belonging to an Instant Hausfrau for a Pumpkin Prowl at Seattle’s Woodland Park zoo. 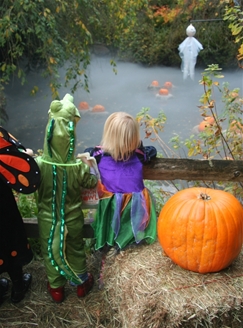 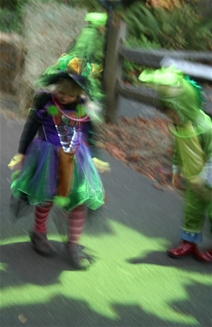 It was spooktacularly well done – we were almost as mesmerised by set pieces such as dry ice and ghosts hanging over a pumpkin-laced pond as the Minx was.

The Hausfrau has become a great friend since we arrived in Seattle and has taken it upon herself to educate us in the ways of the pumpkin. 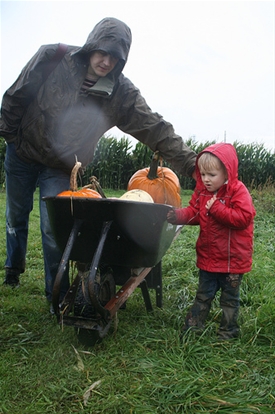 Here is a picture of the Minx and the Husband er, enjoying themselves hugely, as we all hunted for pumpkins in their natural habitat at The Farm, just north of Seattle, as the rain lashed down and the corn maize nearly drowned in a sea of mud.

Actually the day at the pumpkin patch was fab.  Whereas in England everyone would have stayed in with tea and toast and telly, the whole of Seattle appeared to have turned out  in the rain to go sliding down bales of hay in the barn, play with new kittens, learn geography in the map of Washington corn maize and thrill to the story of the three little pigs acted by real pigs.

Photo courtesy of the Instant Hausfrau