One of the nicest things about food shopping in September and October here in the States are the ‘heirloom’ tomatoes which can be found everywhere in the supermarkets and farmers’ markets.

Traditional varieties of lumpen, misshapen, thin-skinned tomatoes all bursting with juice and flavour, and all such beautiful colours.  I have no idea why such things are not available in the UK. 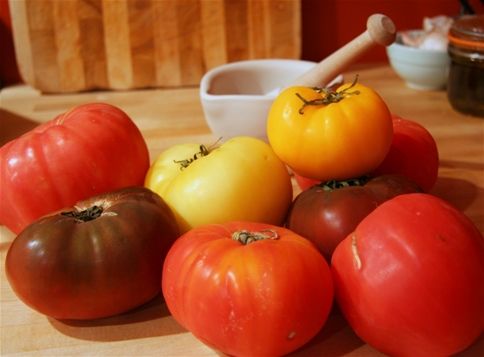 As a result we have been eating a lot of ‘pappa al pomodoro’ (which translates as ‘tomato gloop’, the word ‘pappa’ is also used for baby food).  Most cookbooks translate this as a soup, but it is much more filling than that.  Use it instead to replace a pasta first course and follow it with a bit of cheese or prosciutto and a salad or a side dish of spinach with butter and nutmeg.

We use the recipe from the first River Cafe cookbook which we’ve adapted a bit (mostly because the original recipe serves 10).  It’s definitely one of those recipes which is much more than the sum of its parts and highly recommended if you have a good supply of tasty tomatoes.  The recipe’s use of huge quantities of olive oil is, however, not for the faint-hearted.  It is necessary to give the dish its creamy, rich texture but I doubt if it’s going to be showing up on Weight Watchers any time soon.

Take about 2kg of delicious-looking tomatoes, drop them in boiling water to skin them and remove the seeds. You can also add some tinned chopped tomates if you don’t have enough gorgeous fresh ones. And take ’2kg’ as a guideline, it should just read ‘a lot’.

Chop the fresh tomatoes into bits.  Here’s the Husband chopping ours at the speed of light. 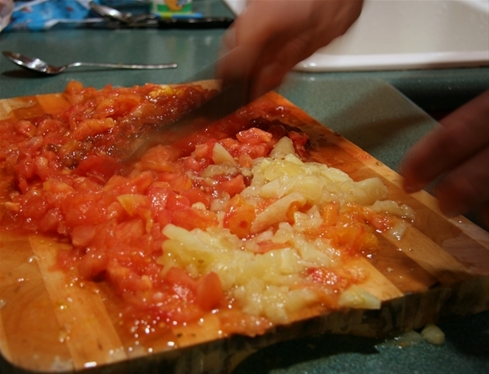 Put a very generous chug of good olive oil in a pan and gently soften two sliced cloves of garlic.  Don’t let the brown. Add the chopped tomatoes and simmer gently for about 40 minutes or until the tomatoes become concentrated.

Add salt and pepper and 1/2 pint of boiling water and bring every thing to the boil. Cut most of the crust off the bread and then add it in chunks to the soup, with a handful of torn basil leaves. 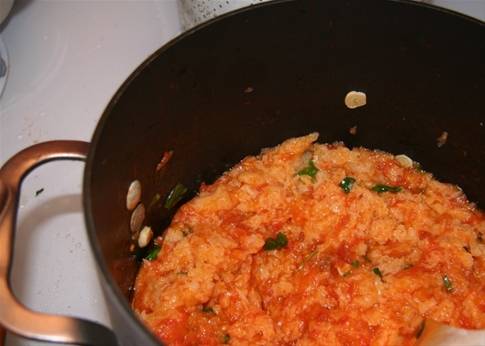 Add another very generous slug of olive oil, turn it off the heat and leave it to cool slightly. Add a bit more boiling water if it’s too thick.

Serve in bowls. Add a bit more olive oil to each bowl if you’re very thin. 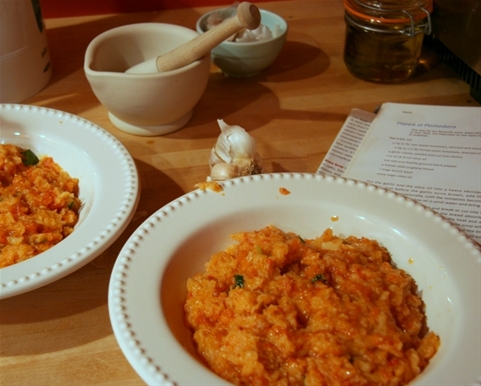