One of the most astonishing things about Seattle is the quite mind-boggling number of Starbuckses to be found everywhere you go.  They’re on practically every corner, and it appears to be the law for every large mall or public space to have at least one outlet.

Even the gingerbread village had to have one. 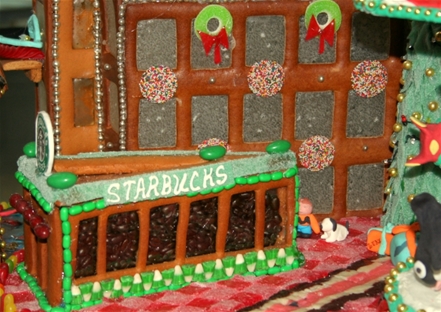 According to the Starbucks site, our Starbucks density is 96 outlets within a 5 mile radius of our apartment (and we’re not even in the centre of downtown) and that doesn’t take into account all the other competing chains of coffee shops.  Even though this density can be beaten in central London and in Manhattan, Seattle – with one for every 13,340 people – at least has the highest number of Starbuckses per head of population.

Now I’m half-Italian and enjoy a well-made espresso or cappuccino, but all this ‘double skinny mocha mint upside down long tall sally frappuccino special with extra sprinkles’ nonsense really doesn’t do it for me.  However, it can’t be denied that most people here seem to have a monstrous coffee habit and it’s the drug of choice for most of the mothers I meet. 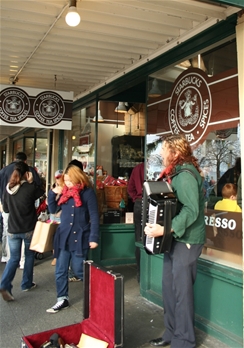 Nevertheless, as the owner of a small business, I did feel rather inspired when we walked past the first ever Starbucks location the other day (in Pike Place Market). It opened in April 1971 and they’ve kept the same unprepossessing storefront ever since.  Here’s my photo but I’ve just realised I didn’t manage to get a shot of the logo, so check out some more photos here.

It would perhaps be wise to take a photo of the current ‘mirrormirror‘ homepage, so you can blog about it when we become a multi-billion $ global empire.

Sabotage – or You Just Died and Went to Cupcake Heaven