Just after Christmas we held a little party and I decided to take a leaf out of Jeffery Archer – British author, politician, crook and all-round slimebag’s – book and make shepherd’s pie; which he apparently used to serve at his high society parties washed down with vast quantities of Krug. 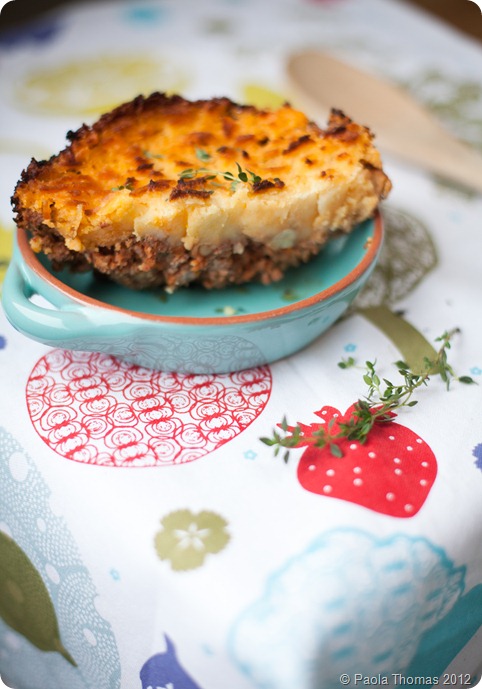 I don’t agree with Jeffrey Archer on very much, but have to say that shepherd’s pie makes fabulous party food. This quintessentially traditional British comfort dish is tasty, rich and satisfying; easy to fork up while standing; can be made beforehand and baked just before the party; sits around happily; freezes beautifully afterwards and delights adults and kids alike.  However, it’s also quick and easy to prepare and makes a fabulous midweek meal.

But before we get on to the recipe I must interrupt this broadcast for a quick semantics lesson.

<pedantry> Firstly it is spelled Shepherd’s Pie not Shepard’s Pie, because it is named after people who used to er, herd sheps and not after a has-been Hollywood actor. Secondly it is called Shepherd’s Pie because it contains lamb ie. sheep meat. You can make it with all beef, but in that case it is more properly known as Cottage Pie since shepherds had nothing to do with it. </pedantry>

The meat you choose is important.  Traditionally it is made with the ground up leftovers from the Sunday roast, either lamb or beef, but i) you’re unlikely to have enough leftover nowadays and ii) it can be a little dry.  I find it better to use at least half raw ground (minced) lamb or beef, though if you do have some leftover meat, it is fabulous added to the meat mixture towards the end of the initial cooking period.

As I mentioned, you can use either lamb or beef, though all raw ground lamb can sometimes be a little greasy. For my Christmas pie I used half raw ground lamb and half raw ground beef and this worked out great. For my base recipes I used one entitled ‘Sarah’s Amazing Cottage Pie’ that I copied down from a friend ages ago, combined with the recipe from the Ivy Cookbook, which gives dishes served at London’s eponymous celeb hangout (it’s a great and accessible cookbook if you can get hold of it). 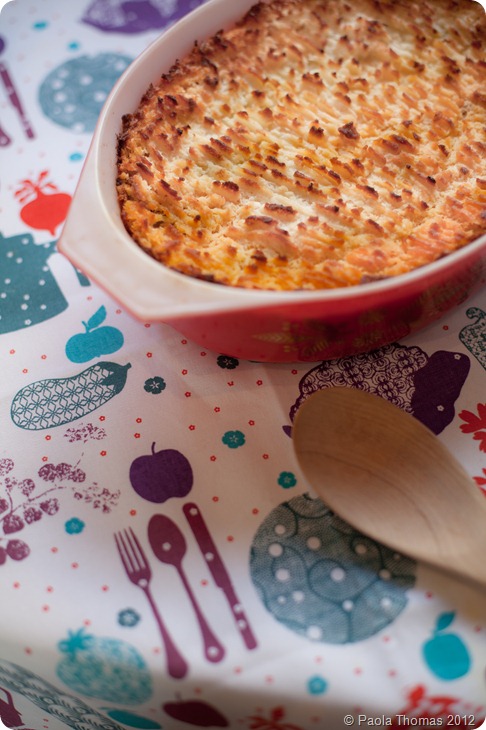 The beauty of shepherd’s pie, though, is that is it a fabulous vehicle for experimentation. Leftover roasted vegetables in the fridge? Throw them into the meat sauce or mash them into the potato topping.  Want to stretch out the meat with fresh vegetables, beans, or feta cheese? I won’t stop you. Want to try different herbs, or flavourings? Give it a whirl.  Here are the basics, with lots of suggestions for options and additions, the rest is up to you.

The following quantities makes a reasonably sized shepherd’s pie for a family of four. Scale up or down as you wish and remember that you don’t have to be precise here.  All that’s important is that the meat sauce does not have too much gravy and you need to have about 2 inches of potato topping over the meat to prevent oozing.

A couple of tablespoons vegetable oil

a glug of Worcestershire sauce (optional)

a tablespoon of chopped parsley and other fresh herbs

Season the meat. Heat the vegetable oil (I use olive oil) in a large saute pan and brown off the meat.  Drain the meat with a slotted spoon and set aside. Add a little more oil and gently fry the onion, garlic, carrots and dried herbs until very soft.  You could also add chopped chilis or other finely chopped root vegetables at this stage.

Return the meat to the pan, dust with the flour and stir in the tomato puree if using (purists don’t like it, but I do) and any spices such as cinnamon or paprika. Cook, stirring constantly, for a few minutes. Slowly add the beef stock and any other liquid flavourings such as wine, Worcestershire sauce or mushroom ketchup.  Bring it to a simmer and cook for thirty to forty minutes until you have a thick, unctuous meat sauce.  About 10 minutes before you finish cooking the sauce add any cooked meat, cooked vegetables, and the can of chickpeas/garbanzo beans if using to warm through,

When the sauce is ready leave it to cool.

In the meantime boil, mash and season the potatoes and add butter, milk, cream, sour cream, egg yolks or olive oil to taste.  You could also add flavourings such as mashed roasted garlic, or horseradish, Just make sure the mash ends up being quite stiff and not too soft and creamy. 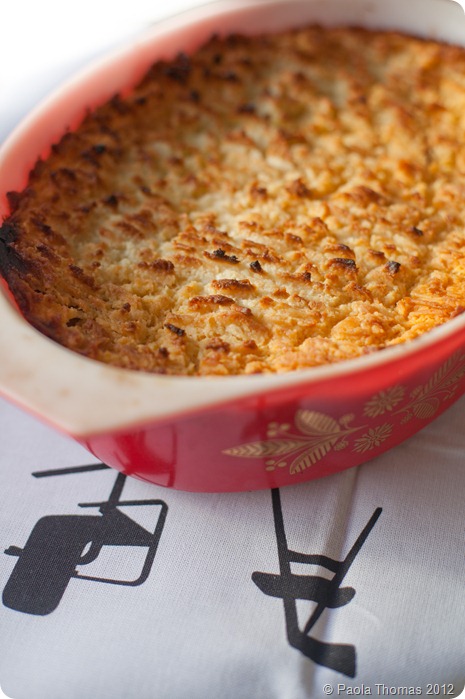 Pour the meat sauce into a deep oven-proof dish and top with the potato, being careful to cover all the meat sauce with at least 2 inches of topping.  It’s traditional to fork ridges into the potato to get a crunchy topping. Dot with a little butter. Some people top with grated cheese, but that seems like gilding the lily to me. Don’t let me stop you though.

Heat the oven to 180 degrees C/ 375 degrees F and bake in the oven for 25-35 minutes until golden brown on top. This dish is very forgiving of being left in the oven before a party, just make sure the topping doesn’t burn.

Serve with some sort of green vegetable or salad and enjoy experimenting!