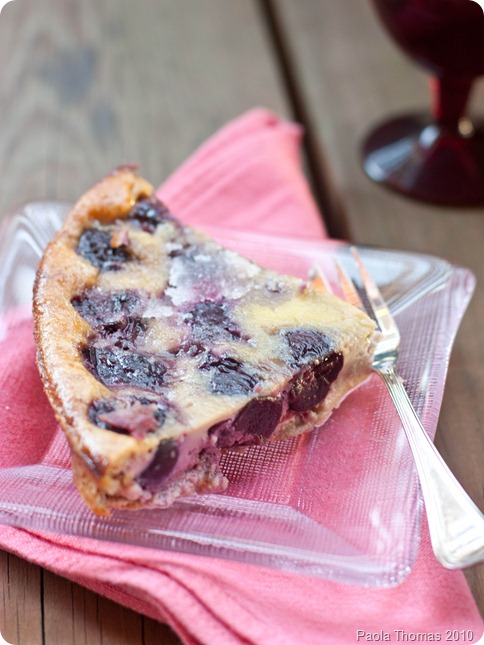 Apologies for the light posting of late – the Minx is only doing morning camp this week, so I don’t have so much free time. The good news is that the interminable summer holidays are coming to an end in less than two weeks, may the Lord and all the angels be praised. Call me a bad mother but I am counting the seconds. America, is ELEVEN weeks of summer vacation REALLY necessary? 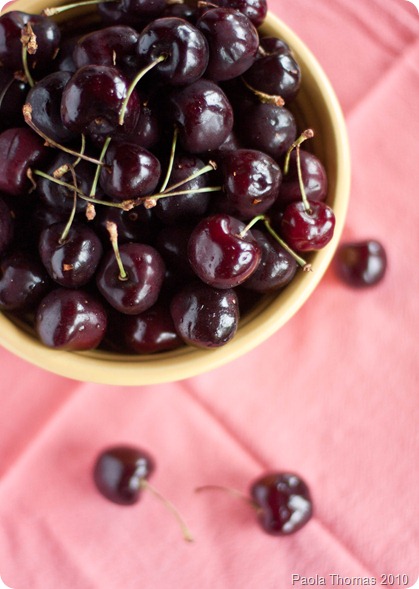 For a brief moment at the end of the cherry season in the UK, the market in Portobello Road was full of deep, dark, rich, ridiculously expensive cherries, the colour of the very best red wine, marked ‘USA”. I used to look forward to those cherries all year.

Little did I know then that the chances were that those cherries came from Washington state and that I would one day be living in a place where the farmers’ markets would be heaving with them. Apparently it’s something to do with the climate and the volcanic soil, but they truly are the best cherries I’ve ever tasted.

Last week was pretty much the end of this year’s Washington cherry season, so I seized the opportunity to make a clafoutis. I first ate (an awful lot of) clafoutis in the South of France when I was teaching there as part of my university degree and every year since then I’ve made it religiously when cherry season comes around.

The recipe I’ve found which seems to me to be the most authentic comes from my ancient battered copy of Paula Wolfert’s the Cooking of South West France which has apparently been recently reissued.

I’ve doubled the quantities she gives to make enough to fit my 34 cm x 20 cm ( 13ins x 8ins). You don’t need to get too precious about the quantities – you just need enough batter to almost cover the cherries.

– Enough cherries to completely cover the bottom of your dish. Many people in France don’t stone their cherries which makes it much easier to prepare but a bit of a pain to eat. I stone my cherries if I’m feeling posh. You could also use apricots or pears – any fruit that doesn’t get too soft in cooking.

– Enough butter to grease your dish

16 fl oz /500 ml/ 2 cups single cream or half and half or creamy milk or a mixture of milk and heavy/double cream, depending on how decadent/slim you’re feeling

– 2 tbsps dark rum, kirsch, Armagnac (optional, I prefer it without) 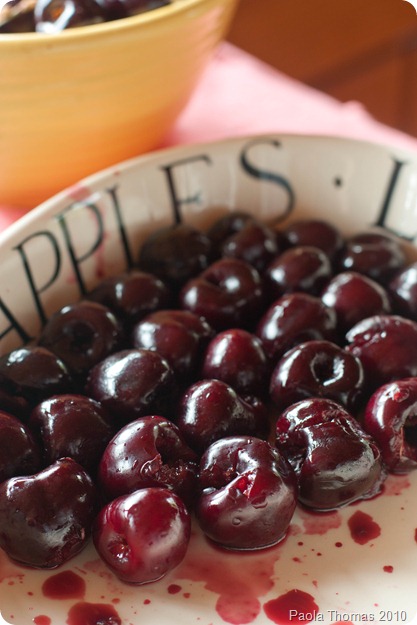 – Remove stems and pit fruit if necessary, if using apricots or larger fruits instead of cherries, slice them in half.

– In a mixing bowl combine the dry ingredients.

– Warm the milk or cream until barely simmering

– Whisk the eggs into the cream

– Whisk in the dry ingredients mixture until well-blended.

– Add the vanilla and rum etc. if using.

– Strain the batter over the fruit (very often I can’t be bothered to strain it).

– Bake for 40 minutes or until firm and golden 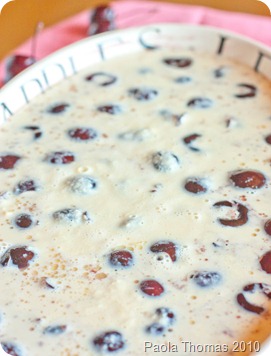 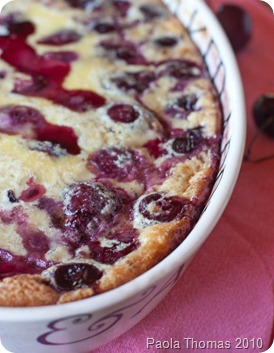 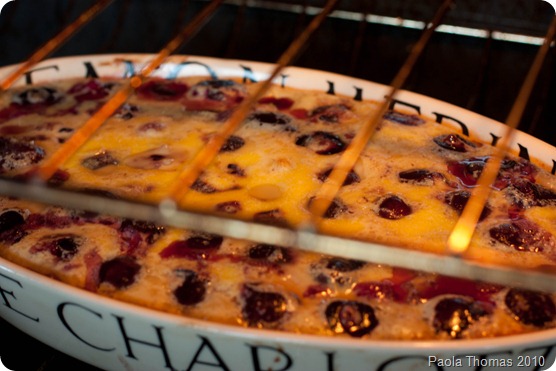 During – oh clafoutis you gorgeous golden hunk of love

– When it’s cooked, take it out of the oven and dredge thickly with granulated sugar while still warm. Serve either lukewarm or cold.

The best accompaniment to this is the sort of extra-thick spoonable double cream that you can buy in the UK and which is unheard of in the US (which I have verifired via a heated Facebook and Twitter discussion). If you can’t get thick spoonable cream, then creme fraiche would do at a pinch or just pourable heavy cream. Or else, it’s really so delicious that you don’t need any cream at all. 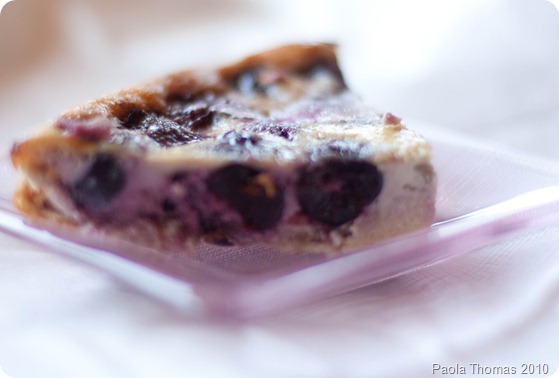