You know how you suddenly remember a recipe and then go through a phase of cooking it ALL the time? Well, we’re currently going through a ‘pasta with leeks and ham’ phase, which we’ve been having once a week since Christmas. It makes a tremendously quick, easy and delicious weekday supper.

It certainly helps that in the grey tail end of the Seattle winter, when most other vegetables have invariably been flown in thousands of miles from Mexico, the supermarkets are full of beautiful white and green leeks.

For this recipe you need to slice thinly a heap of slim and pretty leeks (I think this was about five leeks). 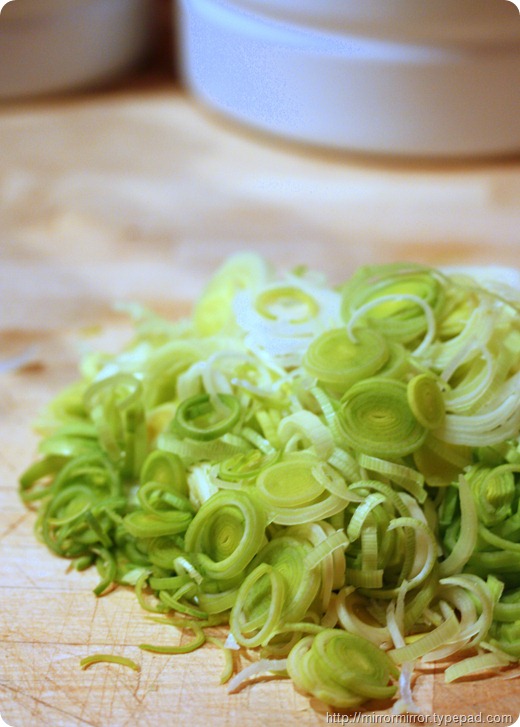 Then melt a knob of butter and a slug of olive oil in a deep-sided saute pan.  I use oil so I can pretend this is more healthy but it’s sadly one of those recipes which improves the more butter is added. If you just want to melt one ginormous lump of butter then I won’t stop you.

When the butter/oil has melted add the sliced leeks and stir until they’re completely covered in the butter, then add about a cupful (8 fl oz or 1/4 litre) of chicken broth or stock. Turn the heat right down and braise the leeks gently, uncovered, for about 30 minutes until the leeks are soft and sweet and the liquid is mostly absorbed. This is a very traditional Italian way of cooking leeks. My mother would do this, replacing the stock with white wine or vermouth and then serve the leeks as a side vegetable. But I digress…

Meanwhile cook some pasta (I like using rigatoni or penne – anything tube-y – with this).

When the leeks are done, add a few slices of cooked ham, chopped into matchsticks, and half a cup (4 fl oz or 1/8 litre) single cream (half and half). Heat everything through, stir into the pasta and then add as much grated Parmesan as your diet will allow. 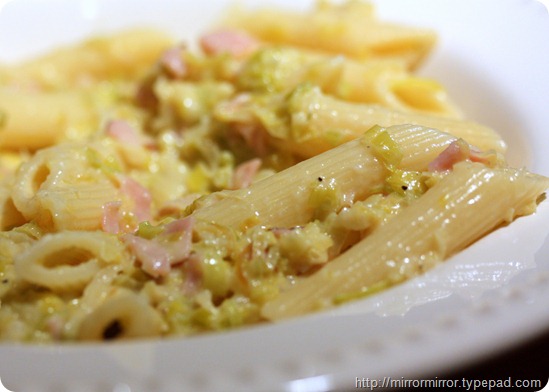