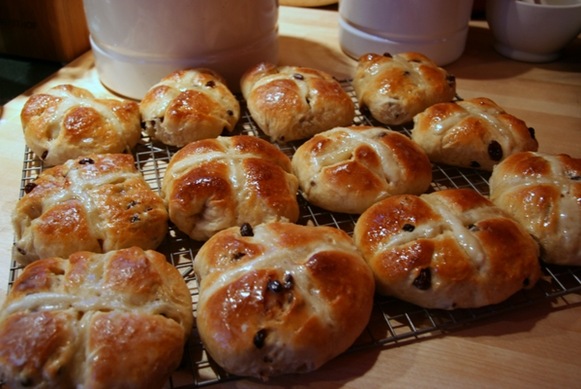 My photo of the buns

It’s funny how important the ‘old country’s’ food traditions become when you move abroad.  Hot cross buns are now available all year round in England and are no longer such a big deal – though I still remember fondly feasting on hot cross buns for breakfast on Good Friday morning and being excited because my father was home on a Friday (Good Friday is a public holiday in the UK).

But here they scarce as hens’ teeth and need to be sought out even at Easter time. And even when you can get them, they’re somewhat spoilt by having an cross piped on them in white icing.  Which is OK as far as it goes but means you miss out on the essential splendour of toasting the buns and serving them oozing with butter.  They’re supposed to be hot. (The clue is in the name).

So yesterday the Minx and I set to work.  Having had only mediocre success with the usually reliable Delia in the past, I used this recipe from the BBC website which came highly recommended by some food blog or other (I’m sorry I can’t remember which).

And then I came across my usual raft of translation issues.

I couldn’t find a source of fresh yeast (a big fat boo to the Essential Baking Company – I’m not linking to them –  who refused to sell me any) so substituted one of those little sachets which seemed to work fine.

‘Mixed spice’ is a unknown quantity here.  I had to look that up on the Internet, to find that it’s a mixture of cinnamon and nutmeg with possibly some cloves and ginger.  So that could be recreated.

Mixed peel, however, was impossible to track down. Chopped, candied citrus peel turns up in all sorts of British home baking and is traditional in hot cross buns, even though the slightly bitter flavour is disliked by many and the peel if often picked out.

But who knew?  I made the buns without and although they tasted wonderful that slightly bitter edge was definitely missed.

I followed the recipe and piped on crosses of flour and water paste which are then baked in the oven so they form an integral part of the bun. And then we gobbled them up, hot from the oven, with plenty of butter. Although the Minx proved how American she has become by requesting a ‘cold crossed bun’ sic. 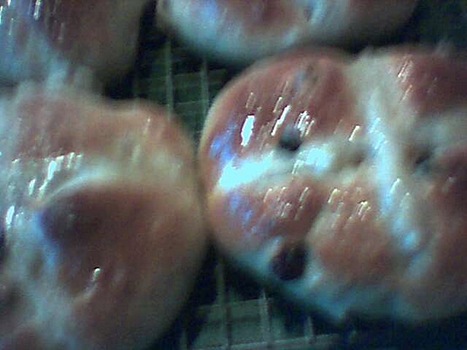 The Minx’s photo of the buns taken with her new camera.  We were both so proud.