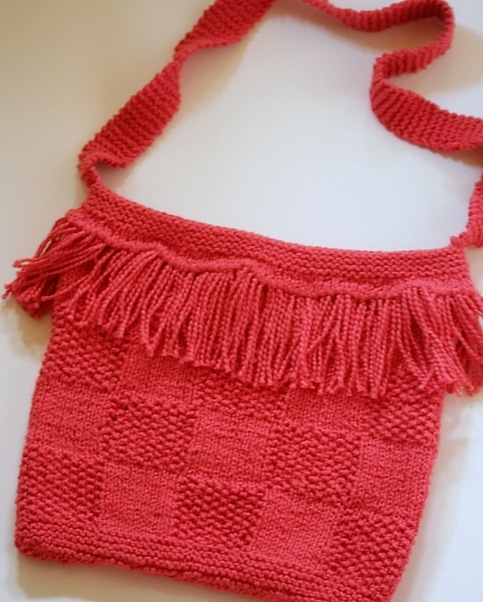 In general I’ve found it better to use words like ‘elevator’ and ‘eggplant’ (rather than lift and aubergine) round these parts in order to have any chance of being understood.  I still though, find myself far too embarrassed to say ‘bangs’ (the American word for a fringe of hair over your forehead).  I mean, where on earth did that come from?

I’ve just finished the Minx’s little messenger bag – and contrary to normal experience, I’m not so very fed up of knitting that I never wish to pick up needles again.  In fact I’ve just started a new project.

The bag was the perfect way to get back into knitting – easy enough to knit mindlessly, while the moss stich embellishment I added was just enough to stop it becoming unbelievably tedious. The best bit though was making the fringe (PLEASE don’t tell me Americans call a fringe on a thing ‘bangs’ as well), which I’d never done before.

After knotting it all up I was supposed to give the bag a hair cut and make the fringe even round the bottom. As you can see I didn’t really succeed (the right hand side is definitely longer than the left) but I was terrified of getting into one of those haircutting situations where you keep cutting at it to make it even and end up with a fringe (or indeed bangs) that look like Herman Munster’s (the Minx has a permanently wonky fringe for the same reason).

The only downside with this bag is the garter stitch strap. The Minx’s first action was to put a heavy jigsaw puzzle into the bag and it stretched so much that it hung somewhere around her knees…

I’ll try and get a photo of Minx and bag to post up, so you can see the full effect.

Things I Am Loving: Studio Mela

Can You Tell What It Is Yet?