One of the nicest things about moving to the US is being able to watch the Oscars as they happen at a sensible time of the evening instead of pinching oneself to stay awake into the wee small hours.  I do miss Jonathon Ross’s snark though.

I have to say though, that I’ve never seen such a boring collection of Oscar frocks in my life. Mile after mile of vacuous starlets parading in slimline silhouettes and fishtail trains, their breast implants squashed into strapless or assymetrical off- the-shoulder necklines.

And the colours – or lack thereof. Last night there were apparently only three choices available – black, red,  or white/silver if you were really feeling rebellious.  If you’re going to go to all the trouble of wearing a posh frock, then why would you choose black? However intricate the actual dress is, it’s never going to stand out in a crowd.  And no, midnight blue is not really a much racier choice.

Though it did make me laugh to see all those girls who really thought they’d stand out by wearing red all queuing up in a long line like London buses.

If you must wear red, do it like Heidi Klum.  Despite being completely addicted to Project Runway, I’m not a big fan of the robotic Frau Seal, but there’s no denying that her Galliano dress is absolutely spectacular.  It’s apparently up for auction for charity, if you’ve still got some Christmas money left over. 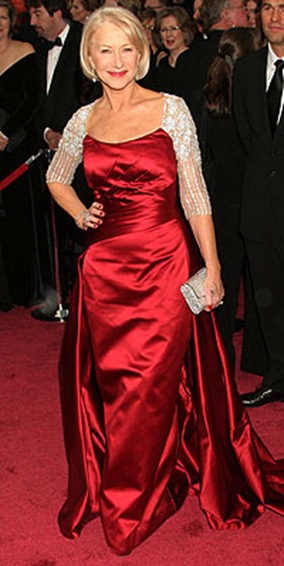 Another contender for Best Dressed, despite being nearly three times the age of some of the vacuous starlets was Helen Mirren.  Oh she makes me proud to be British.

If you’re going to do the fishtail look then why not go the whole hog and turn up dressed as a mermaid a la Best Actress Marion Cotillard in Gaultier.  I was so thrilled with her win. La Vie En Rose was one of the few other movies I went to see last year and her acting was an absolute tour de force. 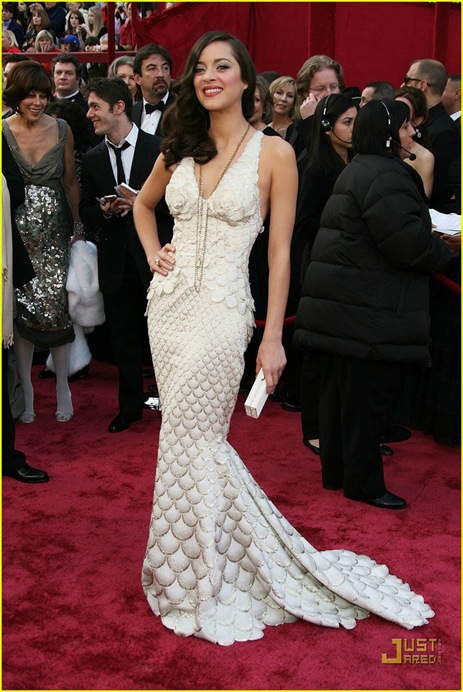 Worst dressed was difficult.  Normally this would have been a slam dunk win for Tilda Swinton, who decided to turn up wearing a black bin liner. 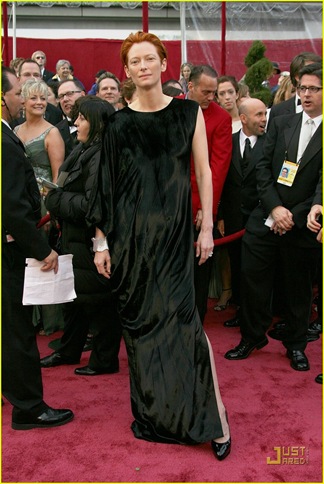 However, it was such a relief to see something a bit different from all the strapless fishtails that I’ll give her a pass on this one, also because one has to respect her Bowie-esque fierceness and the fact that she manages to live with both the father of her children and her handsome toyboy.  Though even given all those things, black really isn’t the right colour for you if your complexion is that pale.

The Husband, who saw Michael Clayton recently, reckoned she deserved her win, but I was sad that the Oscar didn’t go to 13-year-old Saiorse Ronan who managed to act everyone else off the screen in Atonement (not so difficult when you’re up against Keira Knightley, more so when it’s Vanessa Redgrave).

At least she managed to look ethereal and age appropriate (*cough* Miley Cyrus *cough*) in Alberta Ferretti, though the hair was a bit too severe. We will forgive her much for actually wearing a colour other than black red or white though. 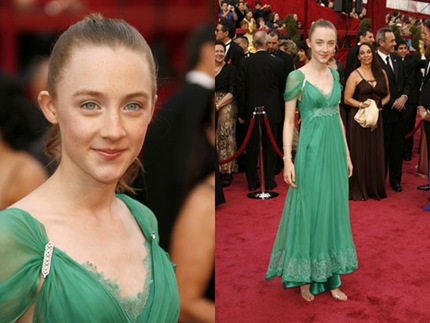 One of the only people other than Tilda, who managed to stand out amongst the personality transplants was Diablo Cody, who won the original screen writing award.  Again, I wouldn’t normally advocate tats and leopardskin, but it worked, because that is clearly who she is. 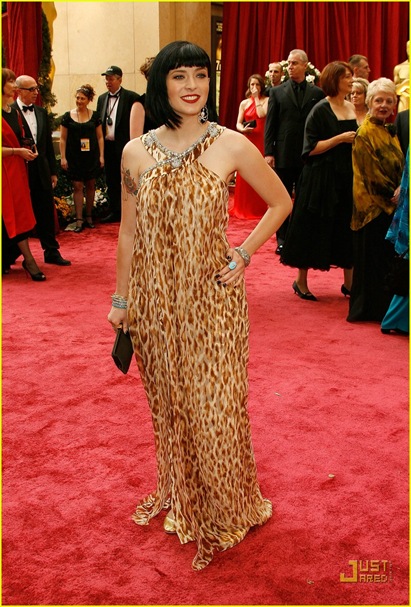 So who wins the mirrormirror Worst Dressed Award?

I’m sort of confused by Nicole Kidman’s effort. Pregnancy has clearly befuddled her brains sufficiently that she decided to turn up wearing a bib made of diamonds.  It sort of looks OK here, but much worse when she was actually presenting her award as the necklace had got all askew and tangled by that stage. But at least she was trying something different.

She absolutely wins the ‘worst face’ award though.  She really couldn’t move it for Botox when making her little speech.  She appears to be morphing rapidly into Lady Penelope. 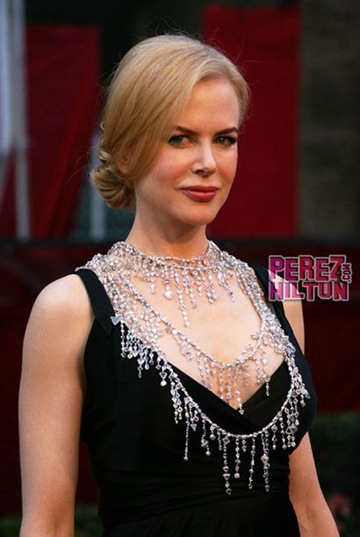 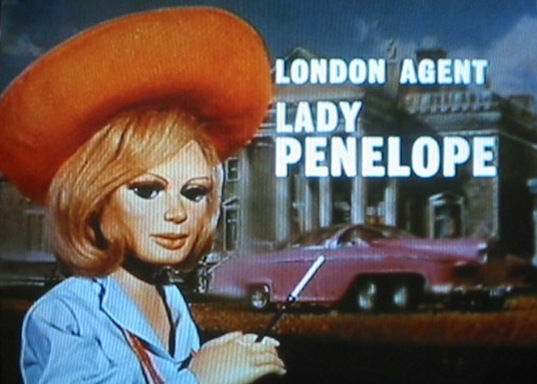 Sadly my girl Jennifer Hudson, of whom I have been a great fan since American Idol days and who quite often looks fab, was again let down badly by her Oscar stylist.  After last years horrific bolero, she wore a frock that made her ample boobage look deformed.  Even the Husband remarked upon it (we know now where he looks when it comes to clothes).  It seems that designers and stylists are completely flummoxed when they have to confront a pair of real breasts. As a woman of ample boobage myself,  I’d love to see her in something plunging and uplifting and in yer face which would get all the fishtailed starlets crying into their implants.  But for the moment though, she’s a strong contender for Worst Dressed. 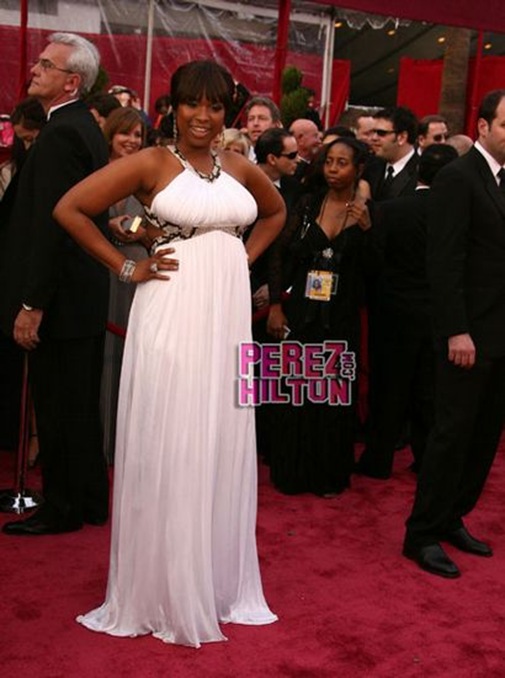 Editing to say that, now I’ve found a pict ure of it, this creation undoubtedly wins the Worst Dressed award.  What on earth was Rebecca Miller thinking?

Accessories They Should Have Worn – Joan Collins Oscars 2011