Ever since I moved from London to Seattle, I’ve noticed that there is a very different design sensibility between Britain and the US, not just in interiors but in every aspect of life.

So I thought it would be fun to launch a series of posts where we can compare and contrast everyday elements of British and American design and just have a chat round the differences.

First up, here are the May 2008 covers for British and American Vogue, which to me exemplify the two different design aesthetics (even though American Vogue is famously edited by a Brit). 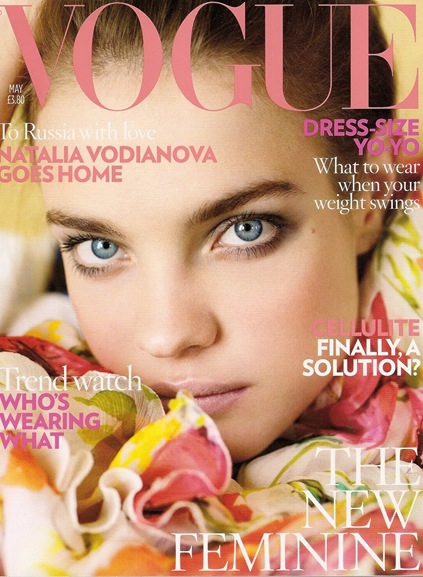 The cover of British Vogue is simpler and cleaner, with far fewer words and simple fonts (though note the use of the serif font).  Colour though is brought into the typeface.

The focus is very much on the model. Note it’s a model not a celebrity – celebrities do appear on the cover of British Vogue but comparatively rarely.  Though admittedly the lines get a bit blurred with celebrity models such as Kate Moss, who seems to be on the cover of British Vogue all the time.  The colours are very bright, clean and fresh and to my eyes very English.  The whole thing seems much more uncluttered and spare. 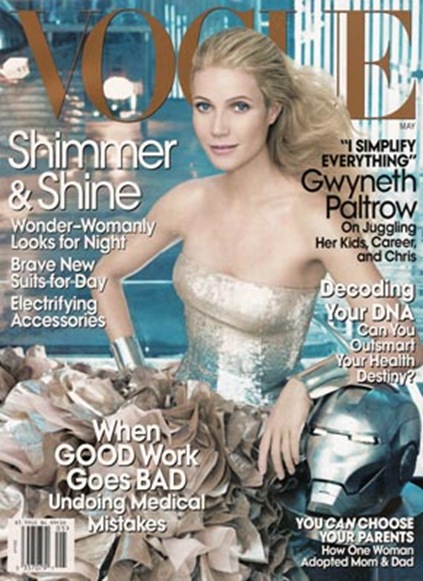 American magazine covers – and this is no exception – seem to have a lot more going on.  There are more words and more different font sizes (though only one sans serif font is used throughout).  There are more emphatic caps and italics and a quote is included. All the words mix lower case and upper case.

The image used is much busier (and more obviously photoshopped?) – more Gwyneth, more dress, more background. There’s a lot more Hollywood glamour – a movie actress, big hair, silver and sequins. And with the mask, even obvious movie product placement (for the Iron Man movie, starring, you guessed it, Gwyneth Paltrow). The colours, though, are more muted and soft than on the British cover.

So, which one do you like best?  Which one would you buy? Do you prefer the cover from your ‘home’ country?  Does the other cover seem very different and/or strange?  Does the British cover seem scarily uninformative and gaudily bright? Does the US cover seem more old-fashioned (as it does to me)? Or does the serif font on the UK cover look old-fashioned to American eyes? If you’re neither British nor American which one stands out for you? Am I the only person who thinks Gwyneth look strangely like she’s been carved out of wax?

(Just adding a poll, because your answers are intriguing me.)

So the thing that’s intriguing me, is that not a single person has said they prefer the US cover, but surely Anna Wintour et al must do focus groups and stuff about this sort of thing? And must think that the US-style cover will sell best? Can anyone out there explain?

By the way is the poll working properly? I’ve had all sorts of trouble getting it up.