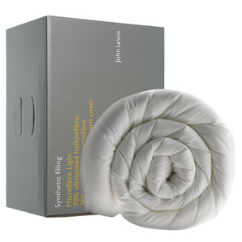 Or, what is the American for duvet?

Up until now I have been an extremely cruel mother and confined my little, exceedingly wriggly, girl to a Grobag sleeping bag and cot (quite a big one as it has potential to be converted to a toddler bed).

The extent of my cruelty was brought home to me when we were staying at the very new and very swish Hotel du Vin in Cambridge and the Minx’s cot came equipped with a zoo-print toddler duvet.  Never have you seen a more delighted girl.  And never have you seen a more shamefaced mummy, when on the next few nights, the Minx proceeded to unzip herself from her Grobag and wear it ‘like a duvet’.

So a toddler duvet must be procured, and it is yet one more thing where I don’t have a clue where to begin here in the US.

I was quite young when the so-called ‘continental quilt’ took the UK by storm and became the very thing for the well-dressed bed.  Somewhere along the line we adopted the French word ‘duvet’ and now I think there is hardly a bed in the UK where they aren’t used.  After all, who would want to go to all the trouble of fussing with sheets and blankets?

The Americans, that’s who.  Correct me if I’m wrong, but from experience of staying in US hotels and from searching for duvets online just now, it would seem that most Americans are still in thrall to traditional bedding with sheets and blankets and quilts and things called shams.

Do you guys know what duvets are?  Are ‘down comforters’ the same thing?  Is this a toddler duvet? Can you suggest anywhere where I might get a funky toddler duvet cover in pink and green which is not as wishy-washy as the Pottery Barn ones (we  – by which I mean I, because the Minx would probably love one – would also prefer not to go the Dora the Explorer duvet route either).  Any advice on American bedding etiquette would be much appreciated, because I really have no idea where to begin.