I always do, and not just because it’s Guy Fawkes Night. 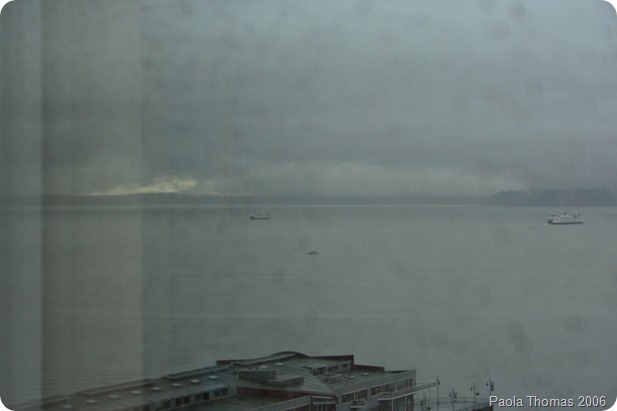 Here’s a photo I apparently took on 7th November 2006.  The view had been even worse over the previous two days, and that chink of light in the distance was a new and welcome development.

Four years ago, me, the Husband and a very small Minx woke up (at 2.30 am I might add, due to the Minx’s jetlag) in an apartment overlooking Puget Sound, ready to begin our new adventure in Seattle.

Record-breaking (so we later found out) torrents of rain were sheeting down the big glass windows, we had no decent food in the apartment, the Minx was bored with the eight books we had brought in our carry on luggage (the rest of her toys were following with our stuff) and was letting us know in no uncertain terms and we were utterly exhausted through sleep deprivation and getting everything packed and organised for our move.

If I’d had a return ticket I would have been on the next flight back.

You too can reminisce by reading my blog entries back then.

We intended to be here for only three years, but yes. four years later we’re still here with no plans to return. Life is a funny thing.

That Was The Week That Was