A lesser woman sits before you today.

As of Saturday I am minus one of 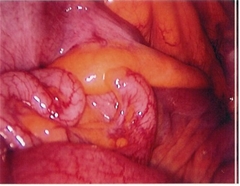 these, though I’ve been told that my own appendix  looked ‘rather unhappy’ and was surrounded by an abscess.

On Thursday morning I called my GP.  ‘Do you remember that pain we spoke about on Monday? Well, it’s better, but not exactly gone. Just a dull ache in my right side. That hurts when I eat. Should I be worried?’

It turns out that I did indeed need to be worried.  Two hours after making the call I was in the Rapid Assessment Unit of St Mary’s Hospital (the same hospital which had tortured me in all sorts of imaginative ways when my daughter was born.)

After lots of prodding and poking, ultrasounds, CAT scans and huge amounts of worrying on my part, as I thought of my friend Camilla, it was announced that I had acute appendicitis, with the further complication of an abscess on the appendix.  Though the pain was lessening and I was feeling better than I had in days,  I needed an immediate emergency appendectomy to lessen the risk of life-threatening peritonitis (or in layman’s terms, the appendix or abscess exploding and leaking toxic pus everywhere).

So I was put on a drip and told that I’d be ‘nil by mouth’ until the operation had taken place.  At this point, you must bear in mind that I had eaten hardly anything since the Saturday night, had vomited or diarrhoeaed out everything else left in my system and was now RAVENOUS in a way that even I have never been ravenous before.

Later that evening I was told that due to other more pressing emergency operations, my operation would now take place the following morning.  I could eat something very light, but would again be ‘nil by mouth’ from midnight onwards.

On Friday I lay in my bed with an extremely painful cannula delivering the IV fluids waiting for my op. And starving. And waiting.  And starving.  By lunchtime I could stand it no more and had to cause an almighty fuss in order to try and get some information.  After two and half hours of complaining (I was hungry, remember?) I ascertained that my operation would probably take place around 8pm.  So I waited.  And starved. And starved. And waited.  And at 8 pm I was told that my operation would now be postponed until the following day (Saturday).  I could eat something light, but would be ‘nil by mouth’ from midnight onwards.

It appears that one of London’s premier teaching hospitals and flagship of the NHS only has one emergency surgery theatre.  I considered somehow puncturing the abscess in my abdomen to see if life-threatening peritonitis might make things move along more quickly, but decided not to take the risk – I’d probably end up being operated on by the tea-lady.

Finally, late on Saturday morning, I had the operation.  Only 44 hours after being admitted as an emergency patient. And on my seventh day of not eating.

I came back home yesterday and am currently feeling rather weak and feeble since I still can’t eat very much.  The wound is like a one-sided caesarean, so I can still hardly walk, though I’m assured this will get better very soon.  And I have to wait six weeks before picking up the Minx to allow the section through my muscular wall to heal, which is going to be very easy. Not.

The one upside of all this is that I appear to have lost 8lbs in a week. I shall be releasing the best-selling diet book forthwith.

< Beyond Your Wildest Dreams
Faith, Hope and Charity >