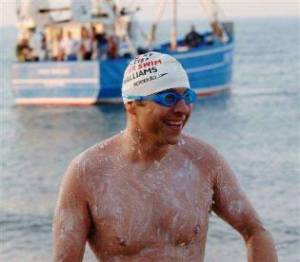 I am beside myself with admiration after watching a documentary about UK cult comedian David Walliams and his incredible cross-channel swim in aid of Sport Relief.

In the summer of 2003 I was feeling at a very low physical ebb after my most nasty miscarriage and a bad dose of anaemia. By chance I came across an article in the Times entitled ‘Ferries are for wimps, let’s swim’, about a new travel company called Swimtrek, which was organising island-hopping trips to Greece where you swam from island to island.

I’ve always enjoyed swimming in the sea (well the Med, I don’t really do the sea in Britain) – I love the invigorating coolness and clarity of the water and find it really relaxing to watch the fish and the rocks below. So, in a moment of utter madness the Husband and I signed up for the six-day trip.

I trained somewhat halfheartedly in the 20 metre pool at my local gym and got the shock of my life when it actually came to doing the first swims.

Firstly, we were expected to swim when it was choppy, or once indeed when there was quite a big swell on the water. This is akin to trying to swim in a tumble dryer and is highly unpleasant, particularly when the Antiparos-Paros ferry cuts across your path and adds its wash to the party.

Secondly, the bottom disappears very quickly, so you can no longer amuse your brain by looking for fish. Instead you are trapped in a world of blue with a shaft of sunlight to your left, your hands passing before your eyes and your thoughts. Which is a very tedious place to be after twenty minutes or so.

Thirdly, swimming is slow. You can swim towards an island for what seems like forever and a day and it never seems to get any closer. It doesn’t help that I tend to swim round in circles unless I’m being shouted at almost constantly by the people in the support boat.

We did our longest swim (5km) between two islands of the Little Cyclades towards the end of the week, when conditions were perfect and the sea was warm and smooth. Nevertheless it took well over two hours, was bloody hard work and was really quite boring, though a sort spaced-feeling takes over around the halfway point when your position relative to the land on either side doesn’t seem to change and all you can do is surrender to the blue.

As a result, I admire David Walliams’ mental strength and physical endurance all the more. The fact that he trained for hours every day on his UK tour while still finding the energy to perform. The fact that he trained and swam in the cold of an English sea, while I could only just about cope with the Aegean. The fact that he had to deal with the wake of over 200 ships crossing his path, when I was freaked out by one small ferry. And the fact that he completed his swim in the astonishing time of 10 1/2 hours making him one of the fifty fastest cross channel swimmers of all time.

It truly was a great achievement. I’m glad that he’s managed to raise so much money for charity (well worth a donation, don’t you think?). But also a bit sad when I look down at my overweight, post-pregnancy body and realise that at the moment swimming even 5km would be totally impossible.