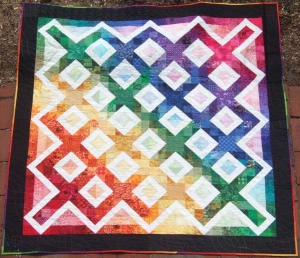 Some of you may have wondered why I’ve got a couple of erstwhile ‘infertility blogs’ on my blogroll.

I got pregnant first go after we finally decided to try for a baby (a huge decision for me as I appear to have missed out on some maternal genes somewhere along the line and have never craved a baby). After reading so many horror stories about the difficulties faced by older mothers, it seemed that it would all come rather easily after all. And I carried on feeling smugly complacent until I miscarried at nearly six weeks. But still, I was an older mother and that was only to be expected. So I picked myself up, dusted myself down and we tried again. I got pregnant immediately again and almost immediately thereafter miscarried again. So alarm bells started ringing.

In the space of just over a year I had four definite miscarriages (the longest pregnancy lasted eight weeks) and at least three episodes where I felt incredibly pregnant but didn’t get as far as a positive pregnancy test. I was referred to the Recurrent Miscarriage Clinic at St Mary’s Hospital in Paddington (I can’t tell you how lucky I am that this clinic is literally ten minutes down the road for me – some people have to travel hundreds of miles to get there).

After a barrage of blood tests I was told that I had a blood-clotting disorder which prevented the embryo from implanting properly but which could by treated using aspirin and steroids. And it was about this time that I started reading Julie’s blog. I came across it when I was searching online for stuff about recurrent miscarriage. Julie had suffered a number of miscarriages after IVF but still managed to write about her traumas in an incredibly amusing, non-sentimental and yes, downright cynical way which chimed with me at the time. Through Julie’s blog I reached Tertia’s blog – Tertia went through an amazing number of IVFs, suffered miscarriages and also the loss of premature twins but still managed to write incredibly movingly about her experiences.

Eventually I became pregnant again and, notwithstanding a terrifying bleeding episode at eight weeks, it looked like this one was going to stay. And Julie in the US and Tertia in South Africa also got pregnant at the same time, also with ‘keepers’. I don’t know these women, they don’t know me. I rarely comment on their blogs or exchange emails with them, but such is the power of blogging that they felt like good friends as we each went through pregnancy, each doubting all the time that this one would actually work. After our respective babies were born – Julie’s very prematurely while Tertia had IVF twins – their blogs kept me sane during the dark days of early motherhood. Bleary-eyed I would read their blogs every morning to find that they too were struggling with exhaustion, with babies who would neither sleep nor stop crying, with breast-pumps and night-wakings.

And what of the quilt? Apart from being a very witty and creative writer, Julie also makes the most unbelievable quilts. Recently she has been raffling a quilt on behalf of another blogger who has gone through a huge number of IVFs and had run out of money. This same blogger organised a ‘online baby shower’ for Julie when she was faced with bringing her tiny preemie home from hospital with nothing prepared for him. I love the karma in this story and thought the crafty people who read my blog would love to see her amazing quilt and read a bit about the love, effort and stories that have gone into it.