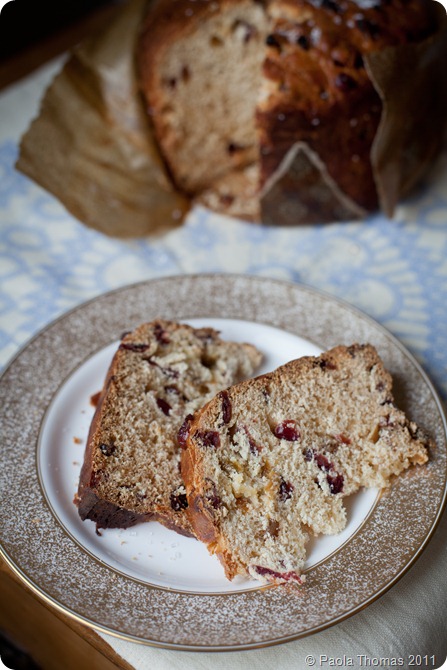 Panettone – the rich fruited Italian Christmas bread – always reminds me of my mother.

When I was little and Italian foodstuffs were not so easily available in the UK, a family friend who worked near Soho, then the heart of the Italian community in London, would always take a trip to one of the small Italian delis at Christmas and bring us a panettone for my mother’s Christmas treat.

Whenever I’ve spent Christmas with my Italian relatives, the table is always groaning with several different kinds of boxed panettone (and its richer, unfruited, cousin, pandoro).  Every Italian I’ve ever met has very definite opinions as to which brands are best and which are to be avoided.  My aunt sources hers from a small local bakery close to their home in Piemonte.

I’ve never met anyone in Italy or elsewhere who has actually made one themselves though and it was only when I saw some paper panettone moulds in our local kitchen shop that I decided to give it a go.  I was a little worried that I might never be able to eat storebought again (as with mincemeat and Christmas pudding) but one just has to be courageous in these matters.

I used the recipe in the Macrina Bakery Cookbook as my starting point, which was enough to make two big loaves in standard paper panettone moulds. (The cookbook suggests making four loaves in small earthenware flowerpots, which is a nice, but seemingly unnecessary, conceit).

It’s a two-step process which takes some time, but it’s super fun baking.  I was doing this just before Christmas so didn’t have time to convert volume measures to weights for my UK readers. Just dig out the cup measures that have been sitting in the back of your utensil drawer.

The other major change I made was to replace some of the mixed candied peel with dried cranberries. If I say so myself this was a revelation and worked incredibly well. As for flavourings, I used the combination of citrus zest and vanilla given below. I used my homemade vanilla extract – of which more in another blog post – which is essentially vanilla steeped in white rum so you may want to add a tablespoon or two of rum if you’re using commercial vanilla.  You may also want to experiment with using lemon oil, orange flower water or fiori di sicilia, all of which can be used in Italian panettone recipes.  Whatever you use, the distinctive authentic taste comes from a combination of citrus and vanilla in some form.

INGREDIENTS FOR THE STARTER DOUGH 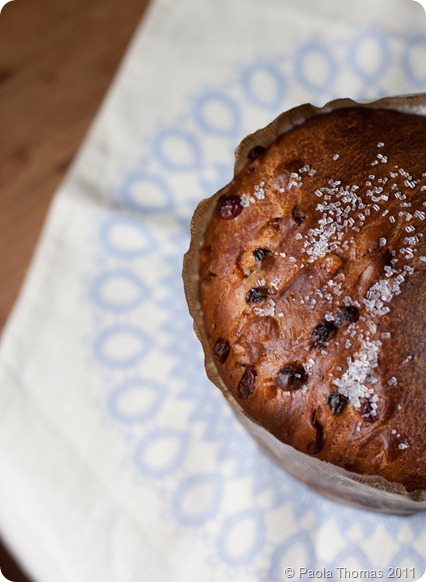 Cut the butter into small pieces and set aside.

Combine the warm water, yeast and sugar in a large bowl (I used my stand mixer) and whisk to dissolve yeast.  Let sit for five minutes so the yeast can bloom.

Add the butter, eggs, orange and lemon zest, honey, vanilla and flour. Mix on low speed to bring the ingredients together using the dough hook attachment.  Increase speed to medium and mix for around 6 minutes.  Transfer the dough to an oiled medium bowl and cover with a damp tea towel. Let it sit in a warm room until almost doubled in size. 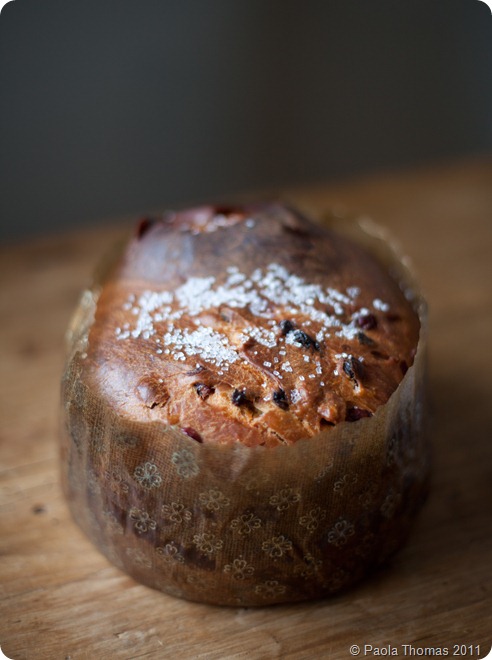 INGREDIENTS FOR THE FINAL DOUGH

1 1/2 cups total dried fruits.  I used a mixture of dried cranberries and and candied orange and lemon peel. I would imagine that dried sour cherries would also be good.  But it would be fun to experiment here.

While the starter dough is proving, place the raisins/sultanas in a bowl and cover with boiling water. Leave them for around 20 minutes to plump them up and then drain thoroughly.

Cut butter in small pieces and set aside.

Punch down the starter dough with floured hands

Whisk together eggs, yolks and sugar in a bowl (I used my stand mixer) until thick. Add the starter dough, salt and flour. Using the dough hook attachment, knead on a low speed for 2-3 minutes.  Increase the speed to medium and keep adding the butter piece by piece.  This should take another 3-4 minutes. Mix on medium speed for another 10-12 minutes until the dough has a satiny finish and stretches easily. Let the dough rest in the bowl for 5 minutes to relax the gluten.

Add the soaked raisins and mixed dried fruit to the bowl and mix into the dough at low speed. Transfer the finished dough to an oiled medium bowl and cover again with a damp tea towel.  Let sit in a warm room until doubled size – 3-4 hours.

Oil two paper moulds and divide the dough between them.  Leave to rise one final time until the dough rises above the top of the papers. 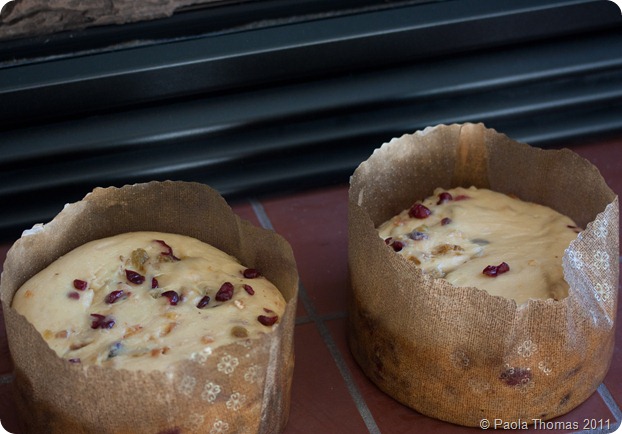 Position an oven rack so that is it close to the bottom of the oven. Preheat oven to 335 degrees Fahrenheit/ 170 degrees Celsius.

Brush the panettone with eggwash then place on a baking sheet in the oven. Bake for around 90 minutes or until deep golden brown on top.

Here is my baby baking in the oven  – it’s amazing what you can do with an iPhone now adays. 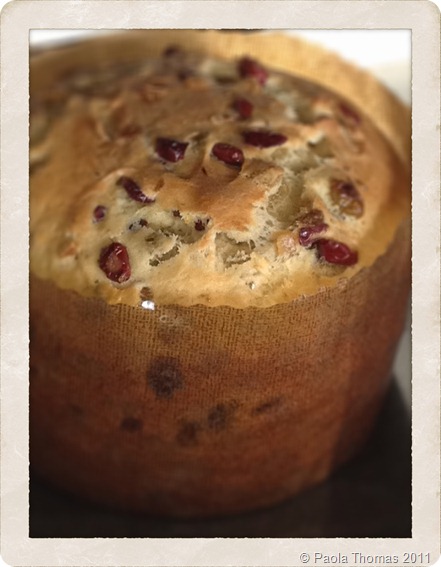 I was doing all this while rushing around packing to go to Whistler at Christmas and decided to experiment by leaving the second panettone to do its final rise in the fridge while we were away.  These lovelies had the most delicious flavour and a soft though robust texture, somewhat like a chewy brioche; and, though not as light and airy as the store bought ones, were in fact very similar to the ones made by the artisanal baker my aunt buys from in Italy. 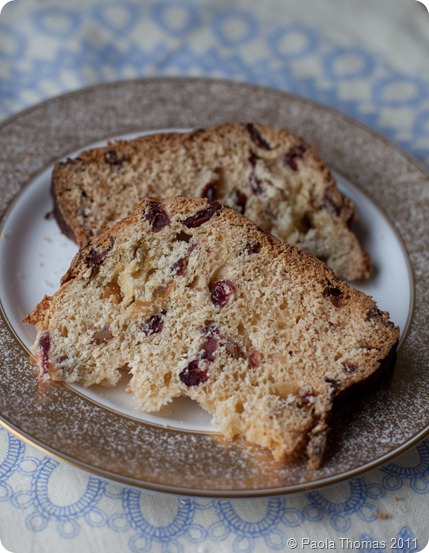 The real revelation though, came with the loaf we left in the fridge for five days.  The long slow rising gave the loaf an indescribably complexity of both texture and flavour, noticeably more interesting than the one which had been baked immediated (and that was pretty darn good).

I’m going to be experimenting more with slow rising in future.  And yes, unfortunately panettone is something else I will never be able to buy from the store again.

< That Was The Week That Was
Hotel Pelirocco – Knitted Hotel Room >