The clocks may have gone forward this weekend but if my organic veggie box is anything to go by, we’re still in the depths of winter here in the Pacific Northwest.  Fortunately, in among the kale and spinach and chard and collard greens, there are usually a few delicious pears to be found, so I’ve been making a lot of my very favourite Pear & Almond Tart from the River Café Cook Book.

The River Café is one of London’s most celebrated (and much missed by me) Italian restaurants and the eponymous cookbooks I have by chefs Ruth Rogers and the late much lamented Rose Gray are among the most dog-eared and stained in my vast collection.

The emphasis on fresh seasonal ingredients rather than fancy cooking techniques means that most of the recipes are highly accessible to the home cook, especially if you’re prepared to fiddle with the quantities, as most recipes are restaurant-sized. 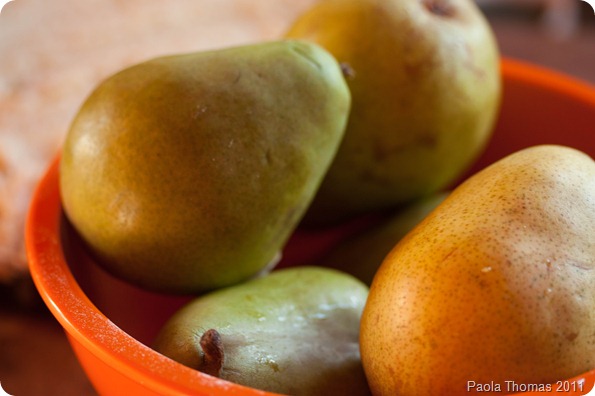 FOR THE SWEET PASTRY

A pinch of salt

90g/4oz/ 1 stick unsalted butter, cold from the fridge and cubed

*I have halved the quantities given in the book to make a smaller tart, plenty big enough for 6-8 servings.  If you wish, double the quantities and use a 30cm (12 inch) loose-bottomed flan tin to make enough for at least 12 greedy people.

Whizz up the flour, salt, butter and sugar in a food processor until the mixture resembles coarse breadcrumbs. Add the egg and whizz again. The mixture will immediately combine and leave the sides of the bowl. Remove the dough, pat it into a ball, wrap with cling film (Saran wrap) and chill in the fridge for at least an hour.

When it’s firm and chilled, grate the pastry into a 9in (23cm) fluted loose-bottomed fluted flan tin and then press it evenly round the sides and bottom. (I have no idea why you need to grate it rather than just press it in in lumps, but I always follow blindly follow instructions).  It’s fine to handle this pastry as much as you want.

Line the pastry case with greaseproof or parchment paper and fill with baking beans. Bake blind at 180 degrees C/ 350 degrees F/ Gas Mark 4 until light golden brown, about 25 minutes. I forgot to line with paper for this session which accounts for the curious pitted nature of the pastry case above.

FOR THE FRANGIPANE FILLING

Cut your pears into large chunks and lay on the pastry shell. You could also halve or quarter the pears lengthwise and fan them out in wheel.  Some people poach the pears in syrup, but if you have fragrant, juicy ripe pears then you don’t need to bother. And if you don’t, go make something else.

Cream the butter and sugar until the mixture is pale and light. Add the almonds and eggs. Spoon the frangipane over the pears and spread so that the pears are covered and the case is filled to the edges.

Bake at 150 degrees C/300 degrees F/ Gas Mark 3 until golden brown and firm to the touch. The recipe says this should take 40 minutes, but it always takes over an hour in my oven. 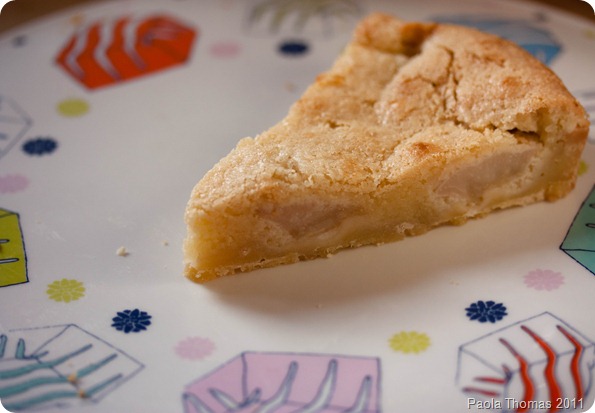 Serve on its own or with a little crème fraiche and refuse resolutely to consider how much butter you’re consuming. Pears and almonds are health foods, right?