When we were despairing of ever seeing the sun again as it poured with rain throughout the winter, I would call Seattle a ‘godforsaken land’ and people would nod their heads sagely and say ‘just wait until summer – that’s the reason we’re all here’.

And I would look all these Californians in the eye (Seattle is full of Californians) and wonder if they were indeed stark, staring mad. 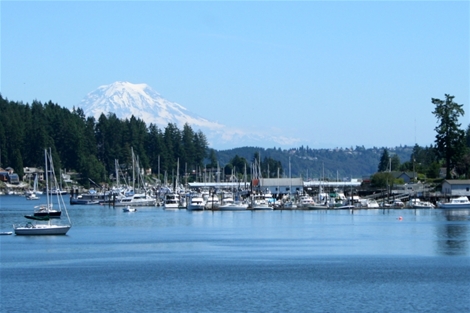 But now I know the truth, in summer the Pacific North West really is God’s own country.  Temperatures around 27 degrees, gentle cooling breezes, no humidity, sunshine sparkling on the water and mountains glistening in all directions.

In particular Mt Rainier, the symbol of Washington State, and its very own huge volcano, can be seen towering above the landscape wherever you go.  In winter it is mostly completely invisible behind a thick pall of grey cloud – I didn’t see it at all for the first two months I was here – and there’s always a frisson of excitement whenever ‘the Mountain’ is ‘out’ (as they say round these parts).

It’s just so enormous and so very beautiful. 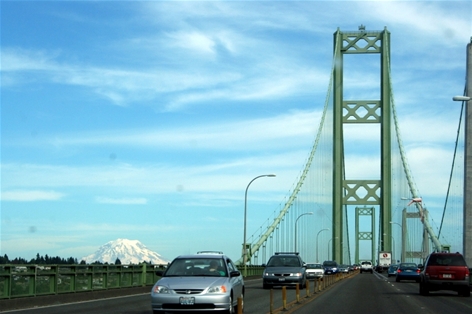 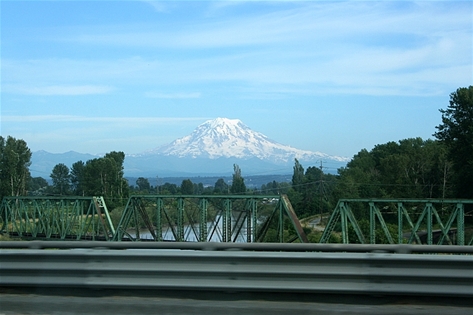 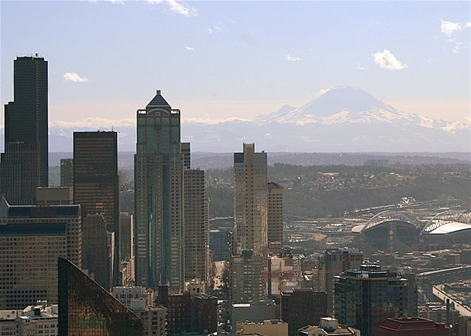 And here’s a pic I took from the Space Needle in February so you can get a bit of a sense of scale.

Apologies for recent lack of bloggery.  Shockingly life just gets in the way sometimes.

We’ve mostly been playing in the sun. Had a great time with our friends from New Jersey, and our Fourth of July party was a ton of work but a huge amount of fun in the end and cemented some rather tenuous relationships.  I’m just trying to catch up now before we head for the Oregon coast on Friday for a long weekend.  Life is tough sometimes.

< Deck Accessories
Possibly the most photogenic place on the planet >