I don’t think I’ve ever had chowder before, so was very excited to come across Pike Place Chowder yesterday just in time for lunch. 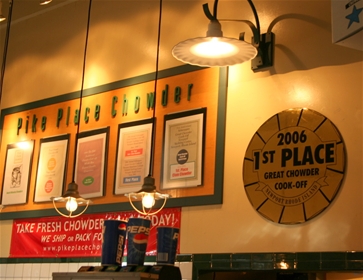 The exciting part is that the chowder they serve is apparently the best in America, having won this year’s Great Chowder Cook-off in Rhode Island.  Being a chowder virgin I have no idea whether it was that good, but it was very delicious indeed – full of flavour and bursting with seafood (my goodness, the seafood in this place is goooooood!).  My only gripe was that it was a little too salty, however I’ve noticed that everything over here is incredibly highly seasoned. 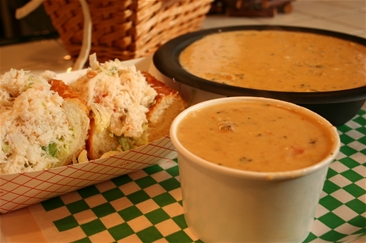 The chowder was further enhanced by this strange and delicious condiment which I’ve never come across before, which is made from sherry and Scotch bonnet peppers. 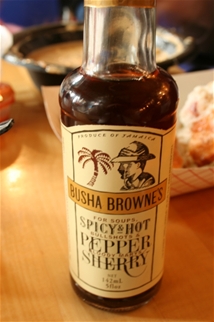 Apparently the name ‘chowder’ comes from the name of a French cooking pot ‘chaudiere’ (etymologically similar to the English ‘cauldron’).  For some reason I did know this trivia food fact, but you’re just going to think I found it online.