I’m sorry for total lack of bloggery recently. I have a big deadline coming up for my University of Washington certificate in online interactive marketing and my nose has been firmly to the grindstone (whatever on earth that means).

The tedium was briefly shattered last Friday by the arrival of a new baby to the house – in the slim, lightweight shape of an iPad 2. 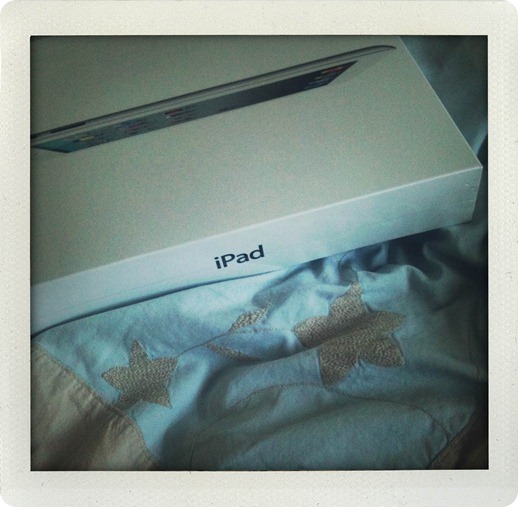 I’ve been lusting after one of these for a long time – I don’t find my heavy laptop with its short battery life to be particularly portable and feel very tethered to my desk most of the time. So I’m hoping this will allow me to tend to emails from the coffee shop; catch up with reading sitting under the cherry tree and Tweet more easily from in front of the telly rather than just pecking at my iPhone like a squinty bird. 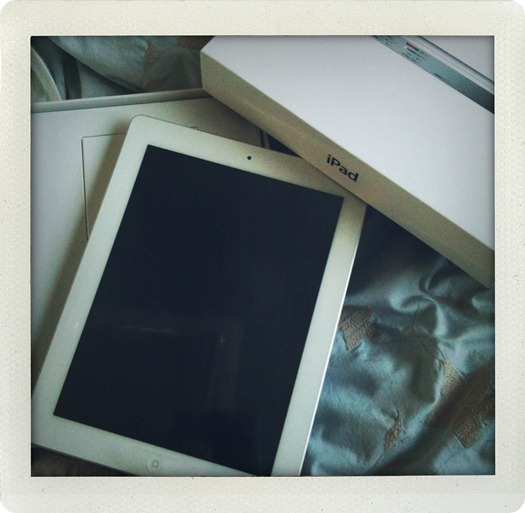 It’s been a big hit since Friday – I’m really enjoying the Flipboard and Evernote apps so far and yesterday the Minx was at home sick and was educated via Math Girl – Addition House; Stack the Countries and Stack the States; DinosaurChess and Playtime Theater, all of which I can highly recommend. 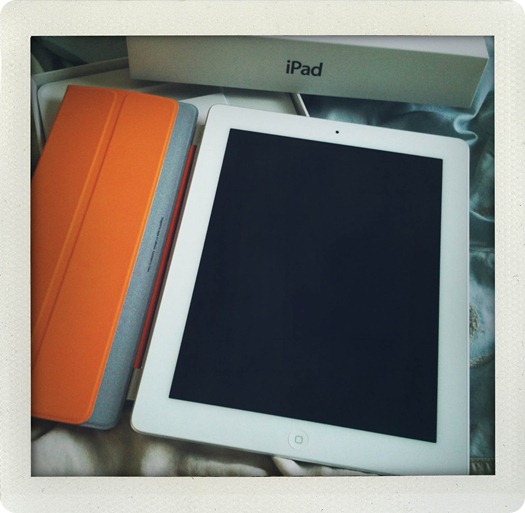 The Husband, who works for Microsoft, was highly sceptical about letting yet another Apple product into the house, so I have to prove its worth by using it all. the. time.

If you have an iPad, how do like it? When and where do you use it? What apps do you like best and use most? Which apps help you work more productively? And which do you recommend for me? As you know I like art and design, blogging, food, photography, music, gossipy entertainment and fashion sites, politics and knitting. And more educational apps and games for the Minx would be good.  I’d also love to find a few more European-centric apps if possible.  And if you’ve got some good new iPhone apps then throw those in as well – many of those are also available for the iPad and in any case I haven’t upgraded my iPhone apps in ages either.

Except Angry Birds.  I’m nearly at 3 stars on ALL levels on my iPhone and when that’s done I never what to speak of that app again.

We wanted to go to Southern California this year to a) escape the miserable Seattle ‘spring’ (I use this term loosely) b) visit my elderly aunt in Dana Point, an hour or so’s drive south of LA and c) take the Minx to Disneyland.

I was told by friends on Twitter and Facebook that Del Mar was fun and it was suggested that we try the newly-refurbished L’Auberge Del Mar. When we discovered that my very favourite discounted fancy hotels travel site www.luxurylink.com was offering a deal, our fate was sealed.

And we had the most wonderful time. 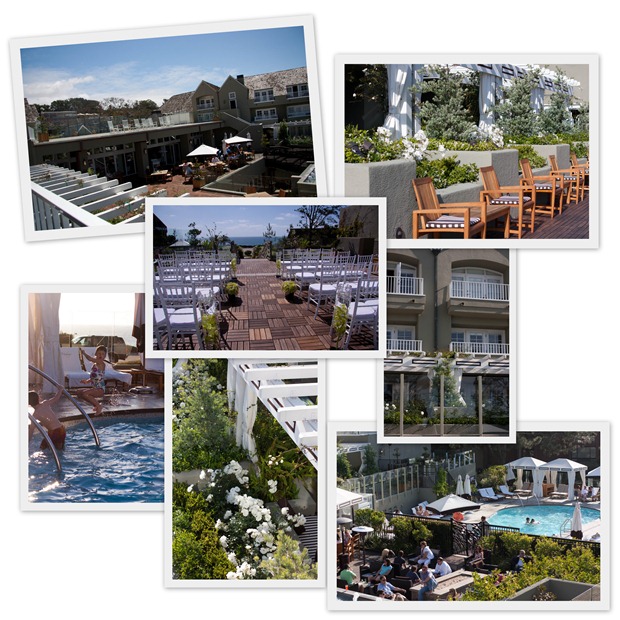 The hotel was completely refurbished in 2008 by interior designer Barclay Butera who has done a great job bringing a historic building bang up to date.

We were lucky enough to have a room overlooking the main courtyard of the hotel, which was been designed as a series of little ‘rooms’, cabanas, terraces and courtyards centered around the small but luxurious pool and jacuzzi area. There’s the kicking Bleu Bar, a scenic terrace for breakfast and informal suppers, cosy hidden cabanas and even space for weddings, all with an ocean view. 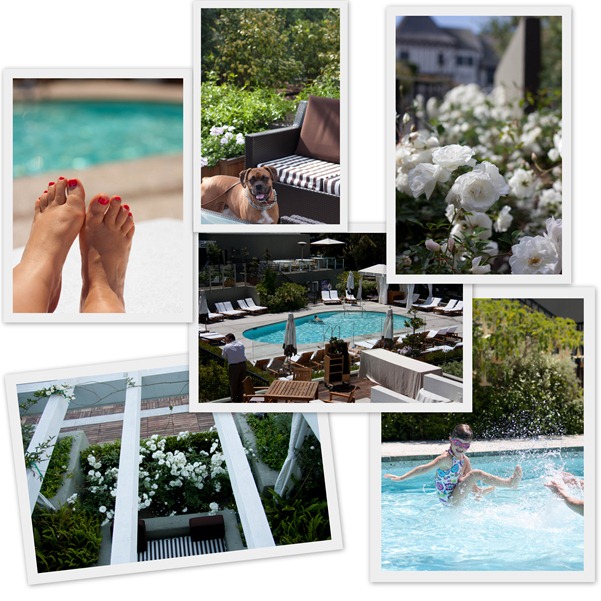 The themes of the décor are soft and muted sage-y greens, brown and white stripes and the most breathtakingly lush white planting – white roses everywhere you turn, undulating seas of fragrant jasmine, and hedges of rosemary and box. 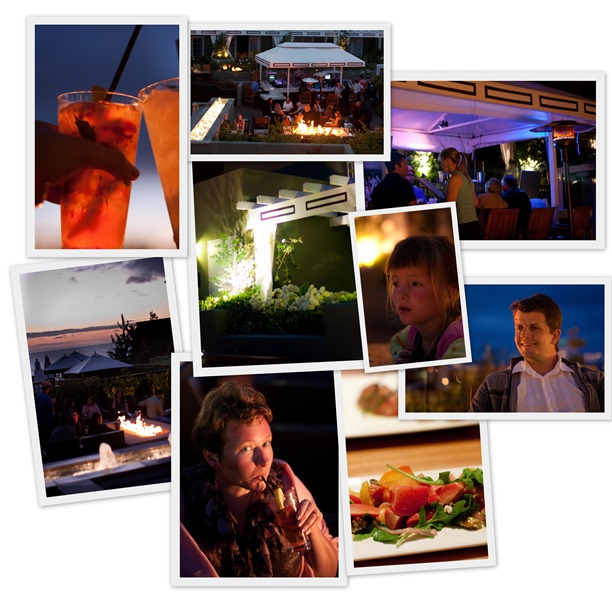 To be perfectly honest we hardly left the hotel all week.  The place comes into its own at night, when the surfers come in from the beach and le tout Del Mar comes out to party. We dined one evening in the hotel’s top notch restaurant Kitchen 1540, where the cured meats, golden beet salad and frozen key lime pie will live on in my memory. We drank superlative cocktails at the Bleu Bar every night. The hotel is beautifully lit with fires and burners everywhere to take the chill off the evening air as the sun sets over the ocean.

The internal décor is luxurious too – all sage greens, soft browns, seashells and comfy seating.  I loved the ridiculously rococo shell-encrusted side tables, the beautiful mother-of-pearl smothered lamps, the green toile cushions and the enormous shell planters full of orchids.

There were little touches of wit and humour everywhere – the wait staff had foodie quotations printed on their tee-shirts and Sofie, Kristy the Marketing Coordinator’s pretty little dog, had a sign at the front desk telling us when she was ‘working’ and available for cuddles. 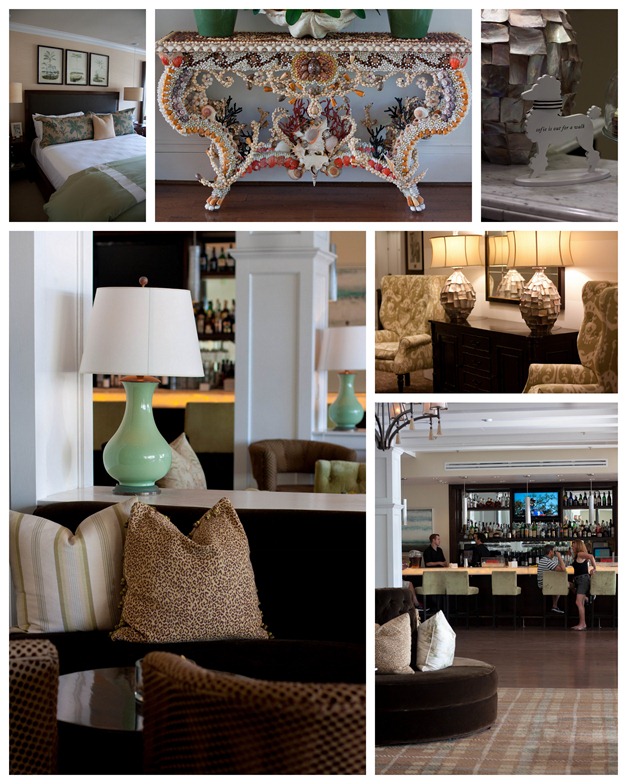 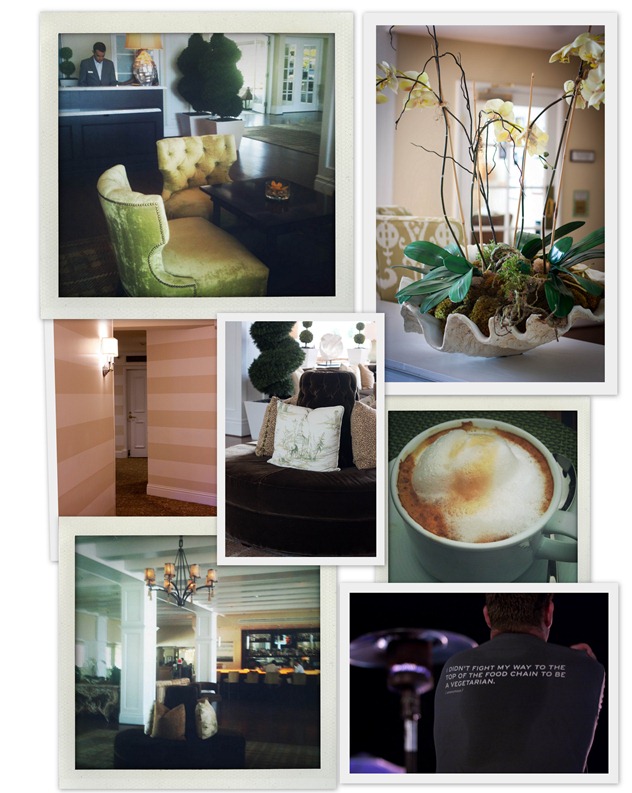 Finally, and most importantly for us, L’Auberge trod that extremely fine line between being super relaxed and kid-friendly (with unbelievably kind staff and a great kids’ menu) and sophisticated and happening enough for grown-ups – thanks to a fabulous bar, gorgeous spa and secluded lap pool. The Minx adored it and the Husband and I are longing to return.

Truly I can’t recommend this one highly enough. 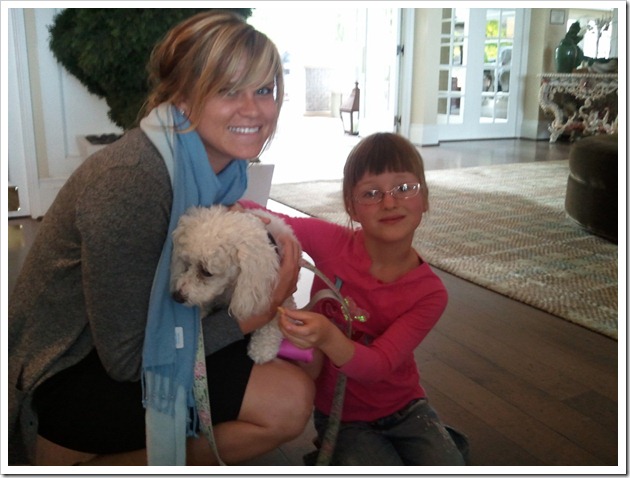 When planning our Royal Wedding-watching midnight feast, I decided to try my hand at  the Chocolate Biscuit Cake which Prince William had requested be served at the wedding.  I vaguely remembered having ‘Chocolate Fridge Cake’ myself as a child and thought that the Minx might like it. 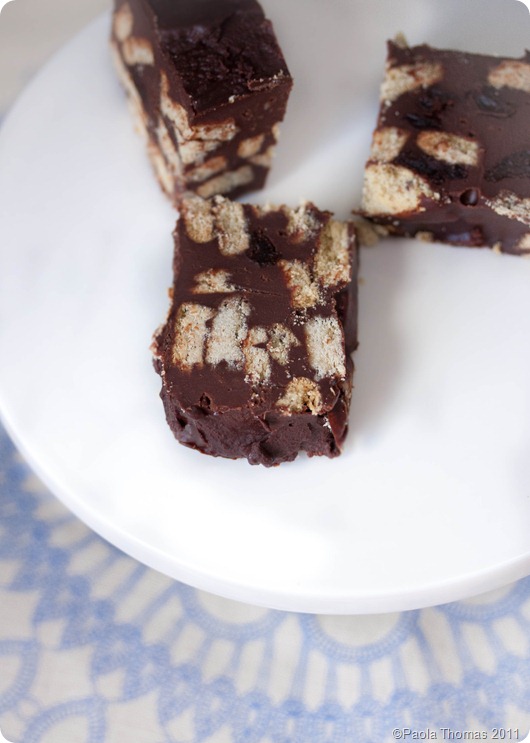 I can now see where Prince William is coming from. This ‘cake’ is obscenely decadent and utterly scrumptious and also very quick and easy to make (though I imagine that the enormous version served at the wedding itself took a bit more time).

I based my version loosely on the recipe given by the Tea & Sympathy tearoom in New York and several British versions.  The great thing about this cake is that, since it’s a ‘no bake’ cake – it just sets hard in the fridge – you can be very approximate with quantities and it will still turn out successfully.

The trickiest part for peeps not in the UK will be sourcing the correct biscuits (yes, biscuits in this case means ‘cookies’ and not the soft billowy scone-like things you eat for breakfast).  The traditional English biscuit of choice would be McVities Digestives or Rich Teas – hard, plain, crumbly biscuits which are not too sweet and and a tad salty. They provide a nice contrast to the rest of the cake which is so sweet and rich.  I can find McVities biscuits in the British food section at Metropolitan Market in Seattle and all the online British food stores also carry them, so they are available in the US if you look. The nearest American equivalent is the Graham cracker but they’re not quite the same.  You could also experiment with some of the plain French cookies which are quite easily available (LU do good ones) or use a plain packet shortbread. Remember, nothing too rich, too sweet, or too fancy.

Golden syrup may also be a challenge for people outside the US. I discuss it at length here. Honey, maple syrup or corn syrup could be substituted at a pinch though your cake will taste different. Or else replace the cream and golden syrup with 14 fl oz (400 ml) of sweetened condensed milk.

Finally dried sour cherries are an inspired addition by moi, if I say so myself. The sour, chewy sweetness adds a whole new dimension to the soft cream unctuousness of the chocolate and the crunchiness of the biscuits. I would imagine that dried cranberries would have a similar effect, and raisins would do at a pinch.

10oz (300g) good chocolate. I used Green & Blacks, two bars of dark and two bars of milk since I had the Minx in mind. More sophisticated chocolate lovers may prefer to use all dark chocolate.

Line a loaf tin with butter and parchment paper

Set up a bain marie or a bowl over a pan of barely simmering water, break up the chocolate into bits and melt it in the bowl, together with the butter, cream and syrup.

When everything is fully melted together, stir in the crumbled biscuits and dried fruit if using until everything is fully coated with chocolate.  Pour it into the loaf tin and smooth the top with a wooden spoon. Chill in the fridge for around 4 hours.

When the cake is fully chilled, melt the remaining chocolate and 1tbsp of cream or milk together to make a ganache. Turn out the cake and spread the ganache over the top and sides, filling in an gaps, lumps an bumps.

Serve in small pieces. A little truly does go a long way, though the Minx (who ADORED this cake) might not fully agree.

Here’s a picture of the cake served at the Royal Wedding at Prince William’s request and made by McVities. They apparently used 35lbs of chocolate and approximately 1,700 Rich Tea biscuits. 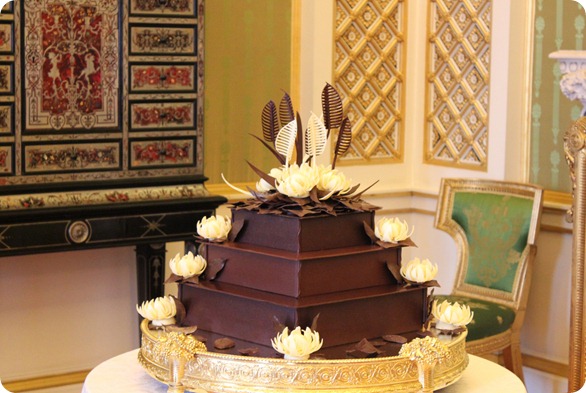 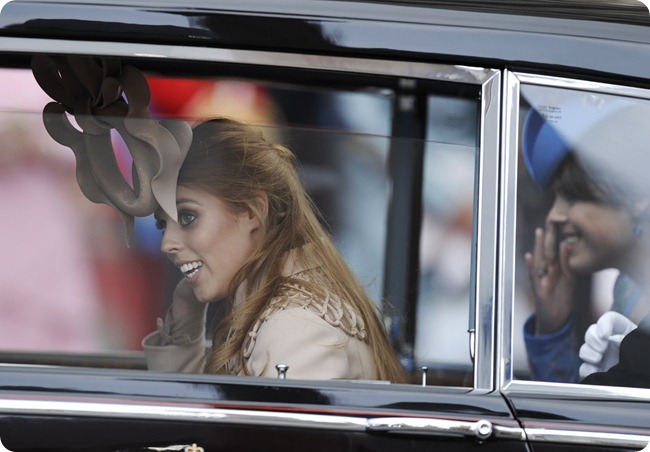 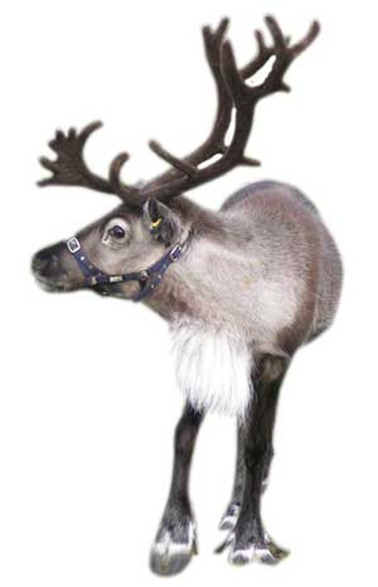 I’ve seen this hat compared to a beribboned toilet bowl and Gaga’s lobster, but this separated at birth comes courtesy of the Minx, who really couldn’t believe her eyes.  I love the way that the people in both pictures of Beatrice are having a good old smirk (though Princess Eugenie looked no less ridiculous).

And seriously, I know Philip Treacy is supposed to be some sort of millinery genius, but honestly most of his many, many hats on the day were awful. Somebody really should have tweaked his meds.