Since I spent five hours sitting on my couch yesterday until my backside was literally numb, I might as well get a blog post out of it, so here are some random Oscar thoughts.

Best bits of the night were Kathryn Bigelow’s win for Best Director  – yet another big crack in the glass ceiling – and Meryl Streep proudly announcing that she was wearing Chris March. Yes, cuddly Chris March, my all-time favourite Project Runway alum. 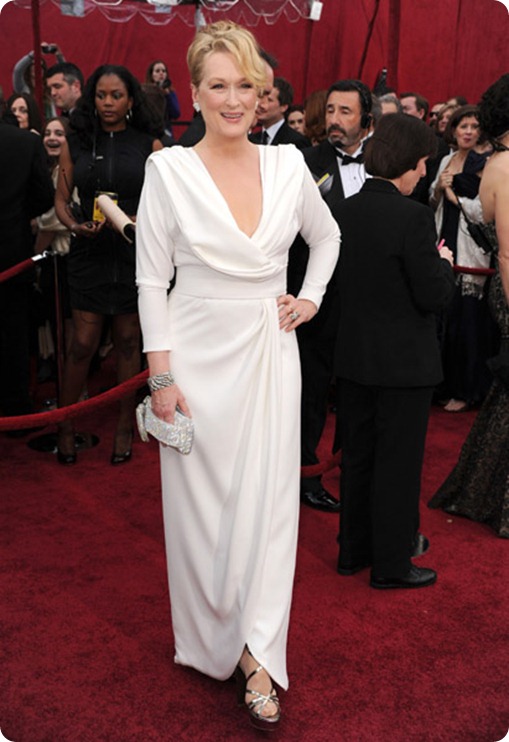 She looked radiant and much better than she often does on the red carpet – the dress looked comfortable, age appropriate (take note James Cameron’s wife) and she looked like she was having a blast wearing it. And unlike many fair people she can really carry off white – it makes her flawless skin look like alabaster.

I thought it might be by him as it was reminiscent of the dress he designed for her for the Golden Globes, so I hope this is the beginning of a long and fruitful collaboration for both of them.

Last night the over-40s really schooled the ingenue crowd in how to take the red carpet by storm. 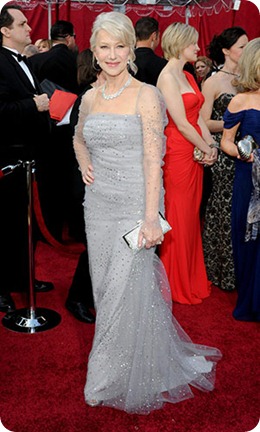 Sparkly, glowy Helen Mirren once again made me proud to be British and was once again one of the best dressed of the night.   Demi Moore proved that Rachel Zoe really does know what she’s talking about, though I think that dress would have been nicer in a colour that didn’t so exactly match her own skintone.

Unfortunately SJP, having heard my comment last year that she was too old to dress like an ingenue, went completely the other way and decided to channel Nancy Reagan circa 1976 wth Barbra Streisand hair.

I was conflicted about the dress as I wanted so much to like it – it was unusual and different and pretty from the back – but in the end it was just too shapeless for her and it wasn’t really helped by the bits of tin foil stuck randomly all over it, nor by the enormous char sui bun made from mismatched hair pieces that she stuck on her head. 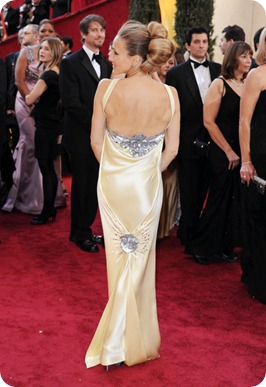 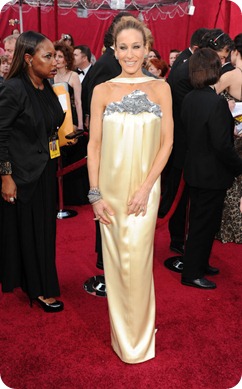 J Lo’s dress has been getting a lot of inexplicable praise this morning.  Personally I thought it looked as if it had been put together in a Project Runway-esque challenge out of miles and miles of bubble wrap and staples, in order to hide the unfortunate stunted conjoined twin she has joined to her hip (I kept expecting to see a little face peeking out from under that side bustle). And isn’t it the convention that you go a little more understated if you’re only presenting?

She is, however, the only woman on the planet who can almost pull something like this off.  And she has the sparkliest eyes I’ve ever seen, as if they’ve been embedded with diamonds or something. If anyone knows the makeup trick she uses to achieve that then I’m all ears. 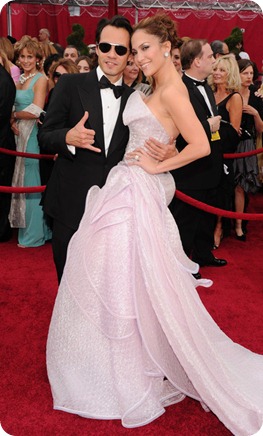 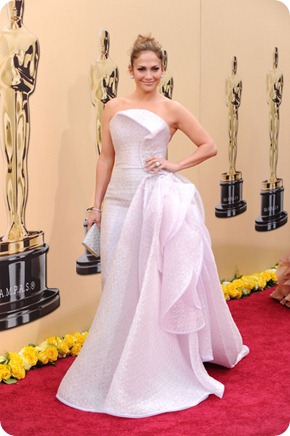 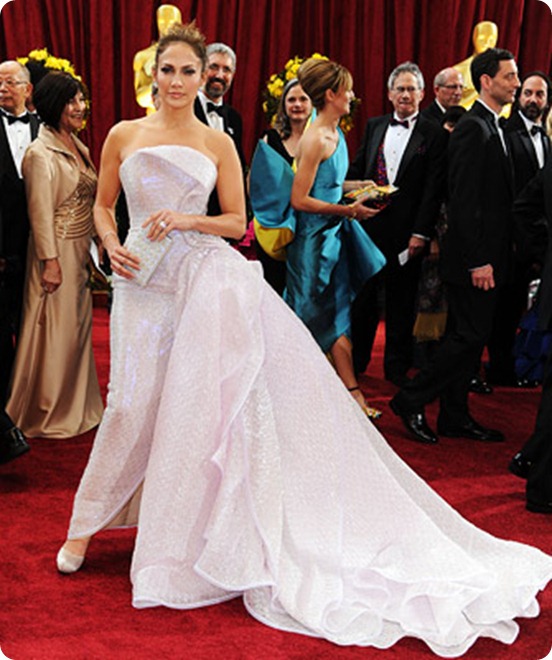 Sandra Bullock (who gave a charming and touching speech and who this weekend also went in person to pick up her Razzie for worst actress – giving her thousands of kudos points in my eyes) decided to come dressed as an Oscar and looked better on the red carpet than she usually does. 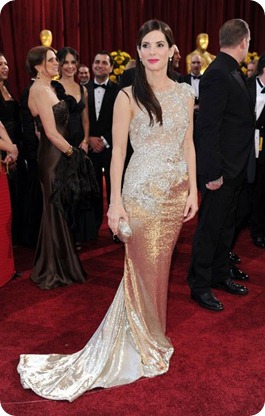 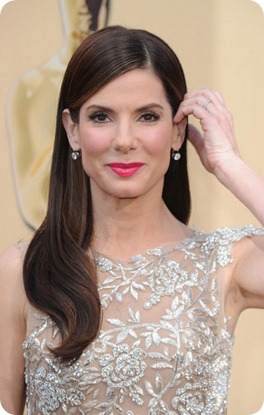 Her hair is spectacularly glossy and shiny too, but if you’ve got big ears then the last thing you want to do is tuck your hair behind them and really show them off (take note also Kara DioGuardi and Ellen DeGeneres on American Idol, who have turned that show into a mesmerising big ear fest).  So I shall cross my fingers and pretend that Sandra pulled her hair into a simple updo and wiped that eyeball-searing gunk off her lips at the same time.

Speaking of unfortunate hair, I did tweet last night that it was a shame Mo’Nique was wearing a cauliflower on her head.

I take that all back this morning as I learn that her electric blue dress and GARDENIA in her hair was her personal tribute to Hattie McDaniel, who also wore blue and gardenias as the first ever African-American winner of an Oscar back in 1939.  (She was apparently forced to sit alone at a table next to the kitchen during that Oscar awards ceremony. SO glad things have moved on a bit since then.)

Frankly I do think Hattie McDaniel (see her acceptance speech here) wore it better and Mo’Nique would have looked a lot less severe with looser hair. 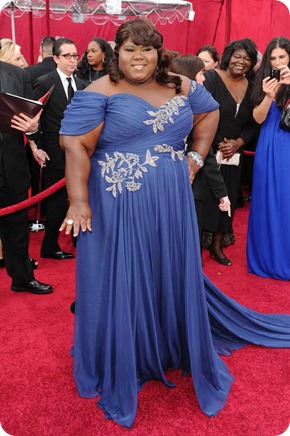 Speaking of larger black ladies in blue. I adored Gabby Sidibe’s infectious exuberance and excitement at being a part of the whole shebang, but her dress was utterly ruined by sticking that cheap-looking applique right over her stomach. Proving once again that designers don’t have a clue how to dress anyone over a size 0. Her upper arms could have done with a tad more draping as well.

Oprah gave us all a lesson in how to be a ‘larger black lady in blue’ but I can’t find a decent picture of her anywhere. 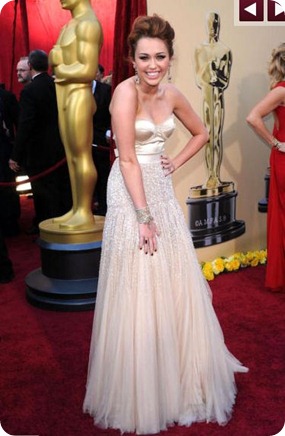 As for real howlers, disappointingly there were no really bad dresses aside from Charlize.

Miley Cyrus – would someone get her off my screen PLEASE? – had me screaming at my television all night in an effort to get her to stop slouching. I think she was afraid that her boobs would just pop out if she pulled her shoulders back.  And visible tan lines is not a particularly classy look.

Vera Farmiga’s dress looked it was single-handedly doing one of those fan dances that strippers do and I kept on expecting a nude woman to jump out from behind it. The colour was absolutely glorious though. 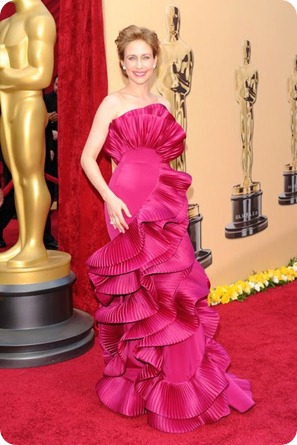 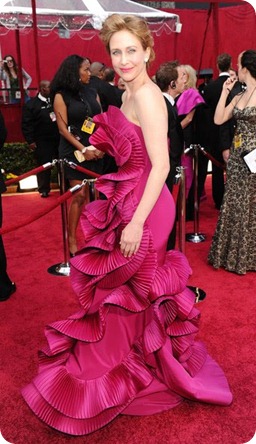 Diane Kruger looked like she’d been through a shredder and was on the verge of being throttled by a boa constrictor. A traumatic evening. 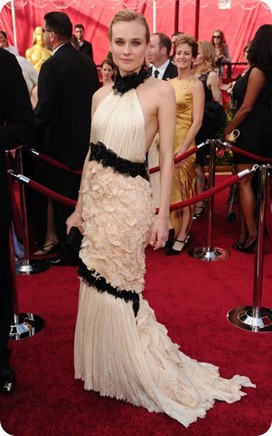 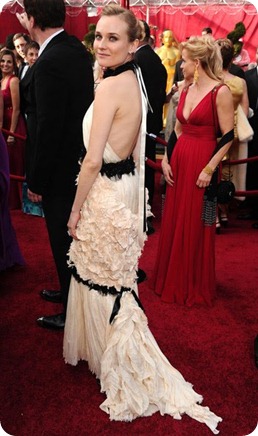 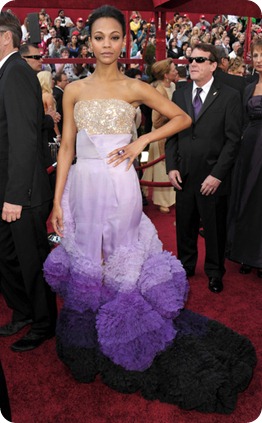 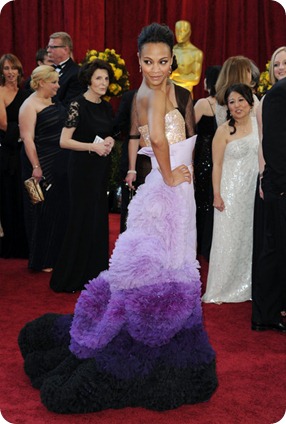 And finally dear old Kate Winslet. Why do you always have to dress like a dowager duchess?  I know you’re on a quest to be Britain’s next national treasure, but you’re still young.  Would it really kill you to have a little fun with your clothes? Another dress that looks like armour, another bad case of helmet hair. And this time it looked like you’ve been visiting Madonna’s colourist, and we all know that’s not a good thing. 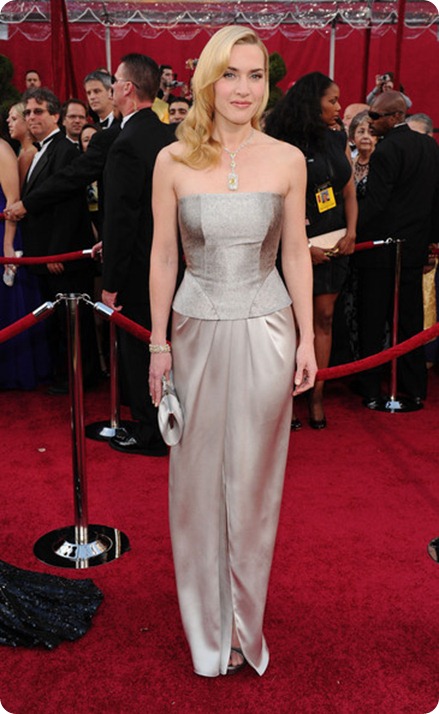 One final note for the Oscar producers. The show itself was as lame as centipede that’s had all its legs cut off. Steve Martin and Alec Baldwin were utterly AWFUL. And I speak as someone who’s just started watching 30 Rock on DVD and has turned into a raving Alec Baldwin fan.

However, a star double-act was born before our very eyes. Tina Fey and Robert Downey Jr. were hilarious while dishing out the award for Best Original Screenplay and should have been hired on the spot to present next year. I’d pay to watch that one. 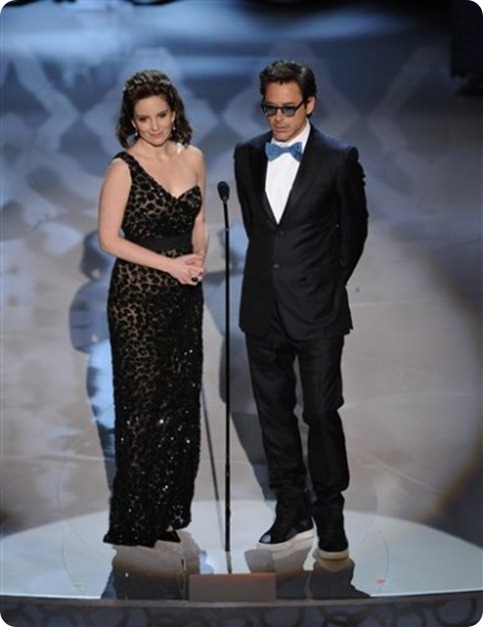 Oh and one very last aside. Whatever happened to these two? Grizzly Adams and his partially melted blow-up doll. 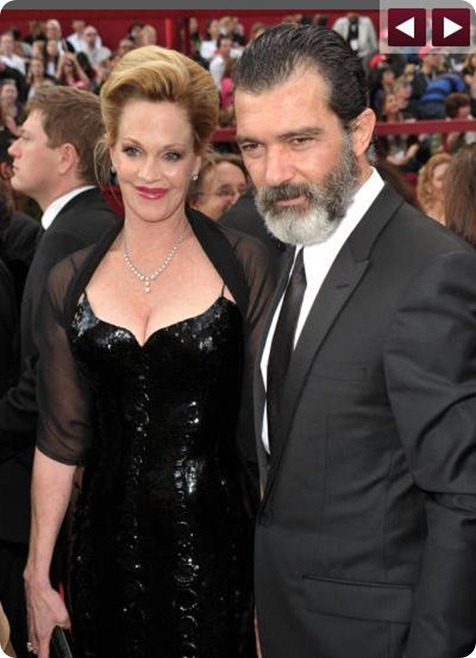 In the swim
< A Right Charlize
Mad Men Barbies AND Furniture >