OK, so this is all very off topic and self-indulgent, so if you’re here for some nice pics of cushions or something then it’s probably best to go now.

As I’ve mentioned before, I’ve not been very happy with my weight since the Minx was born (and was hardly thrilled with it beforehand, to be honest).

I was doing Weight Watchers at the beginning of the year and managed to lose a bit, but I do find all the weighing and measuring and logging food etc to be very tedious, and I really didn’t feel it was improving my already warped relationship with food.

I’ve recently been reading a book by Paul McKenna called I Can Make You Thin which I’ve been finding really interesting.

– Whenever you’re hungry, EAT.  I’ve been trying this for two or three days and it’s a revelation to be able to go and find food whenever you feel hungry, instead of trying to hold out until the next mealtime.

– Eat what you want, not what you think you should.  This is amazingly difficult to get my head round. So many foods are labelled ‘bad’ in my head. But I’ve been trying to consciously examine what my body feels it needs when I’m hungry,  and not eat stuff I don’t really like and which isn’t emotionally satisfying just for the sake of it, or else eat treat foods just because I can.

– Eat CONSCIOUSLY and enjoy every mouthful.  Again, really difficult for me.  I’m always picking stuff out of the fridge or eating on the run or at my computer without really noticing what goes in my mouth.

– When you think you are full, STOP eating.  The most difficult one of all.  I actually eat quite a good diet, with very little junk and processed food.  But I do eat the most enormous portions (not helped by living with someone who’s 6’2″ and naturally skinny).  I just love my food. So now I’m trying to pay attention to when my body feels full, and it’s scary just how small portions have to be.

And that’s it. The rest of the book is full of NLP stuff and before-and-afters and also includes a self-hypnosis tape, which is relaxing if nothing else.  He’s also put out a 90 Day Success Journal, which is probably a bit of a waste of money as it mostly encourages you to record whether you followed the rules with a daily inspirational thought, but I’ve got it anyway as I like the thought of having a bit more focus for 90 days.

In addition I’ve finally managed to score a Wii Fit  which, on the first day of using, appears to be much, much more fun than going to gym, though I don’t quite understand why. So I’m going to commit to playing on the Wii Fit for between 30 and 60 minutes every day for the next 90 days to get some basic exercise in.

And that’s it.  I’m doing this post to challenge myself to stick to this regime for the next 90 days.  I’ll post updates every couple of weeks (Paul McKenna suggests weighing yourself only every two weeks if that) and hopefully some gobsmackingly gorgeous AFTER shots at the end of September when the 90 days is up.

This bit is absolutely not self-indulgent.  In fact it’s probably one of the scarier things I’ve ever done.  But here are some BEFORE pics of me in tight-fitting clothes, online for all the world to see. 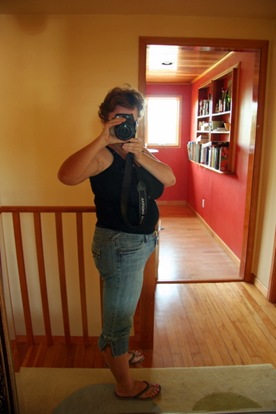 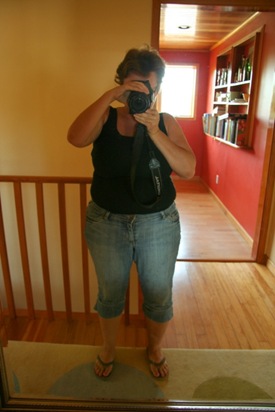