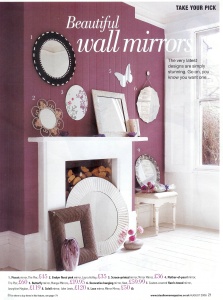 Poor Siobhan had a bit of a baptism of fire while we were away.

I thought things would be quite quiet in mirrormirror land since it was the summer, but we had a great piece of coverage in Ideal Home, which featured both the Atelier LZC Butterfly mirror and the Lace Mirror, so it all went a bit nutty, particularly when she managed to break her laptop screen in spectacular fashion. But we sorted everything out over the weekend and July is turning into a pretty good month for us already, which is very unexpectedly pleasant.

The blog with more bling

Never let it be said that Guido Fawkes, the “attack blog” that is making life difficult for John Prescott, doesn’t know when it is on to a good thing. An advert on its homepage asks readers, “Caught with your pants down? Need jewellery fast?” Who can it possibly be referring to? “Mirrormirror is the online store for all the women in your life.” That’s ALL the women in your life. Further down, a banner ad reminds advertisers: “Nick Robinson reads Guido’s blog. An advert here will reach more opinion formers than an advert in Private Eye.” Who said bloggers weren’t commercially minded?

Traffic from the ad to the mirrormirror site has ballooned recently as Guido has been revealing more interesting John Prescott gossip, so let’s hope there are loads more revelations to come. Cheers Mr P!

(Editing to say that the arrest of Lord Levy – also trailed on Guido’s blog – will do nicely for starters).